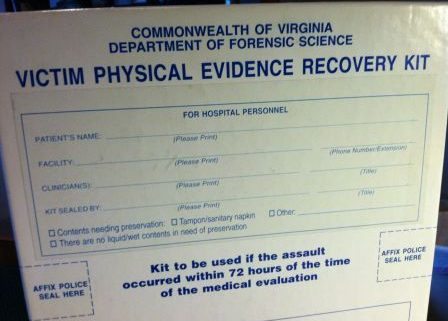 Sexual Assaults do not stop at the scene of the crime. Those violent acts are forever crimes that often replay in the victims’ mind every single day of their lives.

In addition to the horrific nature of the act, victims who report the assaults, and many don’t for various reasons, are subjected to a further invasion of their bodies—the rape kit.

In light of yesterday’s post about Brock Turner, aka Mr. 20 Minutes of Action, I thought it appropriate to show everyone the “rape kit” used to collect evidence from victims of sexual assault.

Keep in mind, this intrusive process is likely conducted by total strangers at a time when the victim is still experiencing the initial horror, pain, and shame of the sexual assault. Sure, everyone involved tries their absolute best to preserve the dignity of the victim, and they’re as compassionate as possible, but the experience is what it is … humiliating, to say the least. However, the process is, unfortunately, vital to the investigation.

Rape kits are known by a few names and assorted packaging styles. Some are used in one area of the country while others are used elsewhere. They’re often called by their official given names, but many refer to them simply as “rape kits.”

Before seeing the actual kit, let’s briefly detail what takes place during the use of the kits.

Typically, when a victim of sexual assault comes to the hospital, an exam is conducted by a specially trained forensic nurse called a SANE nurse (Sexual Assault Nurse Examiner). The victim will also be seen by a physician. First, the medical experts will make sure there are no life-threatening injuries. Then they’ll ask questions about the assault, health history, medications currently taking, etc.

To preserve physical evidence, the victim should not use the restroom or take a shower prior to the exam. To begin the evidence collection process, the victim must slowly undress over a sterile sheet so that any loose items—hairs, broken fingernails, etc.—will fall to the sheet for collection and packaging. A doctor or nurse will examine every inch of her body, including inside her vagina. Her buttocks, mouth, and other areas will be swabbed for the purpose of collecting DNA (hopefully, the DNA of the attacker). Body hair is combed as a means of collecting foreign hairs left behind by the rapist.

Next comes the actual physical exam conducted by the forensic nurse (SANE), including the collection of the victim’s clothing (in the area where I worked the hospital provided new, clean sweat pants and t-shirt if the victim didn’t bring extra clothing), DNA swabs, hair samples, including a combing of pubic hair to collect possible samples left by the attacker. Blood samples are taken, especially if the victim believes she/he may have drugged as part of the assault. A number of hair samples from the victim are also collected.

Victims may refuse any part of the exam, and they may take a break at any time. They may also elect to NOT report the assault to police.

The collected evidence is placed in various pre-packaged containers provided in the evidence collection kits (rape kits). Kits contain items such as swabs, white sheets (placed beneath the victim during the exam), bottles and plastic bags.

In my jurisdiction, the hospital kept a supply of PERK kits in their inventory. The PERK kit is the evidence collection kit authorized by the Commonwealth of Virginia. This is not the case in all states. Please check with authorities in the area where your story is set if you desire to use an actual name as opposed to “rape kit.” FYI – officers DO NOT use the term “rape kit” when around victims of sexual assault and rape. To do so is extremely insensitive, which is why officers in Virginia refer to the kits as PERK kits.

In the meantime, police are busy collecting evidence elsewhere—bedding (sheets, pillowcases), suspect clothing, and the suspect, if identified and located. Sometimes police take an entire mattress as evidence.

Once the forensic nurse completes the exam the evidence recovery kit is sealed and delivered to the lab for processing, which can take many weeks to complete depending upon backlog.

Many writers have asked about the length of time DNA evidence remains viable in sexual assault cases, and where it can be found. Here’s a handy rule of thumb guide. Remember, various circumstances could change or alter these time-frames.

1. Vaginal DNA samples – up to one week.

2. DNA from skin contact – up to two days. If, for some reason, the victim has not bathed it is possible to obtain a suspect’s DNA sample up to a week later.

3. Oral swabbing with positive results – up to two days.

5. DNA from suspect’s penis – twelve hours after the assault.

6. DNA from fingers in vagina – up to twelve hours.

*Semen can be detected on clothing despite washing. Remember, though, it is possible that DNA can be transferred from one item to another during washing. This is called tertiary transfer.

Tertiary transfer is the transfer of an item/evidence from one item to another. This could take place when washing more than one item in the same machine. Avoid tunnel-vision and consider the possibility that the DNA evidence could be pointing to the wrong person. So have your heroes build their cases with multiple bits of evidence, not just DNA found on freshly washed clothing in an apartment shared by six roommates. Besides, the DNA testing process is not 100% foolproof.

Therefore, writers, it is possible for a DNA sample to show up on the clothing of completely innocent person, such as the unsuspecting roommate who shares a load of laundry with his buddy the psycho- serial rapist. How’s that for a plot twist!