Modern-day policing is not the Wild West, where the town marshal sits beside the front door of the jail shooting bad guys from the backs of their horses as they gallop past. Things are much different these days. We’re a civilized nation. We treat people fairly, justly, and humanely. Well, until last Saturday, that is.

By now I’m sure you’ve all seen the headline about the S.C. police officer who shot a fleeing suspect in the back, a man who died as a result of those gunshot wounds. This case, my friends, sickens me all the way to the very core of my soul. But, before we talk about the incident here’s a bit of background about cops shooting people who are running away from them.

First of all, there are times when it’s legally permissible to shoot a fleeing felon, but only during the most extreme, exigent/emergency circumstances. A 1985 Supreme Court case, Tennessee vs. Garner, held that the police may not shoot at a fleeing person unless the officer reasonably believes that the individual poses a significant physical danger/threat to the officer or others.

In other words, short of exigent circumstances, police officers are required to capture fleeing criminals using methods other than deadly force—pursue and restrain, K-9’s, wait until the suspect is at home, call for backup and surround the immediate area, obtain a warrant and catch them at a later time/date, etc.

Again, the use of deadly force against a fleeing felon is justified only when an officer reasonably believes that allowing the suspect to escape would endanger the lives of others/endanger the community. For example, a psycho-crazy maniac who’d just butchered twelve random strangers and was running away while yelling, “I’m going to kill everyone I see!” In this case the officer would have every reason to believe the killer would make good on his threats, therefore, he’d need to stop the murderer using any means possible, including shooting him in the back if that’s what it took to stop him.

In the S.C. incident, however, the initial stop was for a broken taillight. No murder or threat of world destruction. No imminent danger to others. Instead, a minor traffic offense. A summons. Fix the light and the judge will let you off the hook.

During the initial encounter the officer and the subject, Walter Scott, engaged in some sort of tussle where the officer, Michael Slager, deployed his TASER. Slager later claimed Scott took the TASER from him and that’s why he said he felt his life was in danger, an act he apparently felt would justify the use of deadly force.

Scott escaped custody and took off, running away from Slager. Then, in jaw-dropping horror, Slager pulled his service weapon and fired at Scott’s back…eight times. Scott was running in a straight line away from the officer which made his body practically a stationary target (no side to side movement). This was as close to shooting a paper target at the range as one could get. To put it bluntly, Slager had an easy shot. I believe Scott was wounded at least five times, three in the back (one of which entered his heart), once in the buttocks, and another round to an ear.

And, by the way, the TASER, the justification/excuse/reason Slager gave for using deadly force, was nowhere near Scott’s body when he fell to ground. In fact, it appeared that Slager picked it up at the place of the original scuffle, carried it over to where Scott lay, and dropped it on the ground beside his body.

Even if it’s true that Slager felt threatened when/if Scott took the TASER, that threat immediately ceased to exist when Scott dropped it and fled. And, no threat = NO justification for deadly force. 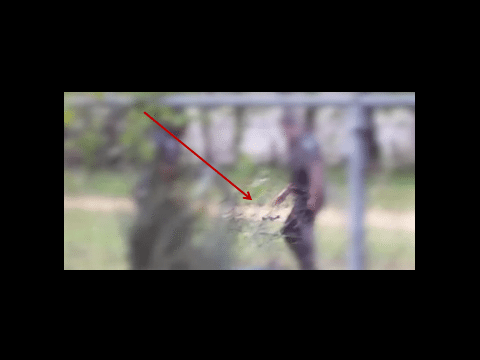 An attempted cover up? Time will tell.

How else can I put this other than to say Slager murdered Walter Scott. There, I said it and I’m not taking it back. That’s my opinion based on what I saw in the video.

Yes, I believe this was a murder. Not a death that occurred accidentally while attempting to cuff a suspect. Nor was it a death that happened while an officer was being attacked. This was a killing that took place while a man was merely running away from a police officer, and people run away from cops every single day of every single year.

People run from the police and cops chase them. It’s part of the job. Sometimes they’re caught and sometimes they’re not. I’ve seen young men run away just for the mere fun of seeing officers chase after them. But it’s not a sci-fi movie where, for sport, cops give the bad guys a running start and then shoot them in the back.

One question that’s popped up as result of this case is about handcuffing wounded or dead suspects? People have asked why? Well, it is standard procedure because more than one wounded or “dead” person has suddenly popped up to shoot, cut, fight, run away, etc. Therefore, even though it may seem cold and cruel, cops always handcuff suspects, even those who’ve been shot and appear to be deceased.

This was a sad day for the family of Walter Scott. It was also a sad day for law enforcement, when one of their own does something as despicable as the act committed by Michael Slager.

I have to say, though, that Slager’s actions are by no means reflective of all officers. By far, most want to serve their fellow man in any way they can. Unfortunately, a few bad apples slip through the cracks and their actions deepen the divide between citizens and the badge.

Michael Slager was arrested and charged with the murder of Walter Scott, and he remains in the Charleston County Detention Center under no bond status.

I think it’s safe to say that most police officers across the U.S. believe Slager is where he belongs, behind bars.