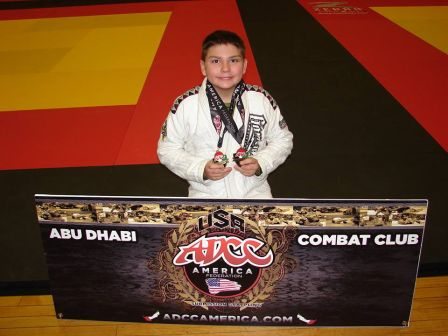 How long does it take to become a champion mixed martial arts fighter? Three years? Five? Maybe even ten long and grueling years? Well, how about less than a year? That’s right, last February (2013) one young man of the ripe old age of 11, walked through the doors of a martial arts school for the first time. Four months later he won the Ohio state North American Grappling Association (NAGA) championship in his age division. In the months following, he went on to claim top honors in numerous other tournaments and competitions, including the Abu Dhabi World Submission Fighting Championship.

What, you may wonder, is my interest in this now 12-year-old? Well, he just happens to be our grandson, Tyler.

I’ve been involved in the martial arts for many, many years (Aikido and Chin-Na), and I’ve trained numerous people, including police officers during their academy certifications. I taught rape and sexual assault prevention classes at a few colleges, and I’ve trained executive bodyguards. Denene and I once owned a gym where I taught classes. To help round out my knowledge of the arts, I trained in Tae Kwon Do for a while. Obviously, martial arts have been a part of my life and lifestyle for a long time.

Now, it is absolutely wonderful to see Tyler show such a great interest. He’s truly dedicated to his training, hitting the mat seven days a week for three or four hours, or more, each day. He’s always been one to go all out for whatever he decides to tackle.

Tyler’s fortunate to have title-winning coaches and trainers in his corner. They spend many hours each week, helping and pushing Tyler toward his goals. His coaches are champion MMA fighters who know what it takes to win. More importantly, they insist that Tyler devote as much, or more, time to his schoolwork (he’s an honor roll student). 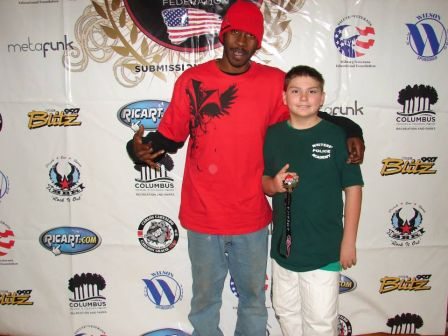 Tyler and coach/trainer Ezrah Hines. Anyone recognize the name on Tyler’s t-shirt?

Grappling is one of Tyler’s favorites, and it seems to suit him just fine. I believe he’s currently undefeated, winning most matches by tap-out.

An opponent “taps out” when he/she (yes, both males and females compete) has been placed in an inescapable submission hold. In other words, the pain is so intense that the fighter taps the mat or a portion of their body to signal they submit (give up). 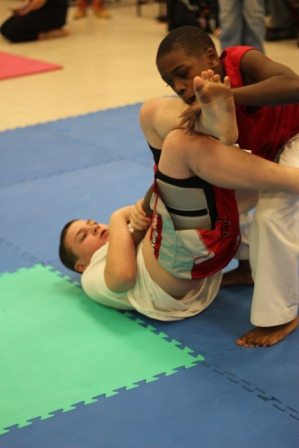 Tyler (on his back in the above photo) locked his opponent’s arm, forcing the wrist, elbow, and shoulder into an extremely unnatural and painful submission hold. With the pain too great to withstand, his challenger tapped out. 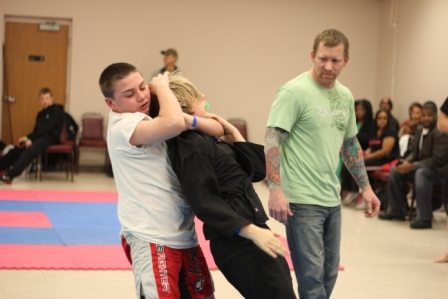 After fighting his way to the final match, Tyler (above left) locked in a rear naked choke, causing his opponent to tap out. The match lasted only 17 seconds.

A few of Tyler’s other accomplishments include, to name a few:

Tyler recently received a nomination to the 2013 USA Martial Arts Hall of Fame. He is to be inducted at an upcoming black tie banquet. Past honors have been presented by top names such as Chuck Norris, Ben (Superfoot) Wallace, Ken Norton, and Conan Lee.

And that brings us to this… The expenses associated with the Richmond event are, well, let’s just say the trip is pretty doggone expensive. So, Tyler is asking for donations and sponsorships to help bring his dream of winning the nationals to fruition. If you would like to help out, please visit Tyler’s Fundly page by clicking the link below (sponsors and donors will be listed as supporters on Tyler’s website and future match apparel).

Every donation, no matter how much, would be a huge help and greatly appreciated.

Tyler and I both thank you!! And, if any of you are in the area that weekend we’d love to see you there.

*In exchange for a donation of $50 you’ll receive ad space (for four months) for your book here on The Graveyard Shift (see top right of this page).

Here’s a video of Tyler training, and during a few matches.