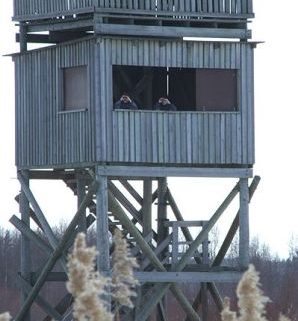 Surveillance is often the best means of obtaining the probable cause needed to arrest, or to obtain a search warrant. Of course, there are certain laws that must be followed before, and while playing peek-a-boo with the bad guys. Here are the basics:

1. People in public places (the mall, walking in the park, etc.) have no expectation of privacy. Therefore, it’s okay for officers to watch and record your every move. This can even be stretched to sounds, such as a suspect who’s inside a hotel room and is talking so loudly that his voice is easily heard in the public hallway outside his door. Yes, detectives can listen to that conversation, and they legally can use whatever they overhear. Also, police officers may look into windows, as long as their view through the glass is from a public place.

2. Remember the hotel room from above? Well, police do not have the right to listen through air-conditioning vents or other mechanical openings. The courts have said that’s a no-no—an invasion of privacy. Same thing for overhead vantage points in public restrooms. Besides, that’s a little creepy.

3. Trespassing onto private property to conduct surveillance is another NO. Officers cannot crawl across someone’s front yard and then peek into their windows to see what’s “going on.”

4. Trash that’s placed on the street for collection, or in other public places, is fair game. Officers may paw through to their little hearts’ content.

5. Officers cannot intercept wire communications (telephone, etc.) without a court order. In some states, however, as long as one party to the conversation consents to the tap, it is legal.

a) extension phones are not considered taps, so it’s okay to listen-in, as long as one party of the conversation consents.

b) electronic surveillance based on an order by a local or state judge is illegal under federal law, unless there is a specific state law that authorizes the judge to issue the order. Without that law on the books the local judge may not legally authorize the tap.

c) officers may “wire” informants because at least one party in the conversation (the informant) has knowledge of the “wire.” Again, this is state specific.

The Fast Way To Recreate A Crime Scene: No Measuring Required!
Scroll to top