This week things settle down a bit as we join Detective Adams doing what detectives do during the course of their day—investigate crimes. An investigator’s day is a busy one, but not normally as frantic as the 8 to 12-hour shifts worked by patrol officers. The difference? Patrol officers spend their time reacting to crimes as they happen. Detectives work the crimes in reverse, starting with the aftermath. And that process can be very slow.

In the opening scene of this week’s episode, Detective Lydia Adams is investigating the murder of a young woman, a college student, who once had everything going for her until her addiction to crack cocaine led to her downfall. Adams commented about the bullet wound in the girl’s back, a wound that was pretty typical in size and shape for one caused by a 9mm round. This scene actually helped viewers get a pretty decent picture of what a real gun shot wound looks like in the field. This accurate portrayal was in sharp contrast to the bullet wounds we saw in another cop show that aired on Monday night.

Anyway, back to the dead girl in Compton. Adams notices burn marks on the girl’s mouth/lips and fingers. This is a sure sign that she’d been smoking crack cocaine. Crack is often smoked in metal devices which become very hot as the “rock” burns, which can quite easily sear human flesh.

So, how was the show’s accuracy this week? Let’s have a look at some of the major points.

– Detectives begin questioning neighbors, hoping someone will come forward with a description, a name, or something that could point them in the right direction of the killer. This process can be like tooth-pulling, as we saw when a woman was stopped by an officer as she walked by. “Hear nothing and see nothing,” was her statement, which were five words more than most people offer. Folks just do not want to get involved, fearing for their own safety.

– Investigators enter a home to question a possible suspect. The kid’s grandmother quickly morphs into angry mother hen mode and orders the cops out of her house. Again, the detail in this scene was great. In many areas like this one, kids live with their grandparents, especially the grandmother, while the parents are off doing whatever it is they do.

– Meanwhile, back at the murder scene officers are attempting to gather evidence in a yard filled with litter and debris. Yes! Finally, a TV show gets this right. Crime scenes are rarely ever as neat and tidy as what we’re offered on most TV shows. The scattering of garbage and junk makes evidence collection a very difficult job.

– Many TV shows wrap their evidence in neat little bundles for the viewing audience. It’s all right there for officers to find the second they set foot on the scene. Not this show. Detectives have to work for what they get. For example, two empty 9mm casings were found at the scene, but only one round struck the victim. Where was the second round? Were there two victims? This happens in the real world all the time. The missing “second round” is a part of every case that must be solved, even if it actually means no more than the shooter missed his target.

– Adams and partner deliver the death notice to the parents of the murder victim. This was one of the most difficult parts of my job, and one case stands out in my mind to this day. I can still picture the husband peering out at me through an opening in the living room curtains as I parked my unmarked car and walked to the front door. It was early in the morning and dew was still heavy on the grass. I caught the scent of bacon frying as it drifted over from a neighbor’s house. Another set of curtains parted and a set of very young faces pressed against the glass, wondering why a white man with such a worried look on his face was coming to their door at such an early hour, before the school buses began making their rounds. Those thirty or so steps from my car to the house told the entire story. I didn’t need to say a word when the door opened. His wife of twenty-five years, and the mother of three kids, standing there like stair steps, wouldn’t be coming home.

Adams did a great job in this scene. She plays her part very well. in fact, she’d be a great partner.

– Adams and partner hear gun shots so she calls it in and drives away. In the old days cops would have investigated the sounds. Today, gun shots are as commonplace as bums begging for money at intersections. You sort of want to report them, hoping the cops will make them move on, but it’s really not worth the bother. Besides, they’d just show up again later.

– The crew ends up in a busy hospital ER searching for the “second” victim (they always turn up in emergency rooms). While there they spoke to a man who’d accidentally shot off his ear during an arrangement with his wife. The wife placed the severed ear into an ice-filled glass and brought it to the ER. Officers took a look into the bloody glass and one then asked his partner, “You want to get something to eat?” This is so typical of real cops—the sick, black humor. Sometimes, it helps ease the horror. On the other hand, I’ve seen officers eating while waiting for a tow truck or ambulance at brutal automobile accidents. So it’s not all about soothing raw emotions.

– Detectives learned that the murder victim had attempted to steal an IPod and jewelry from her sister so she could sell it to buy crack. This is very real side-effect of crack smoking. The addict simply cannot stop smoking the stuff once they go on a binge. The drug’s hold on the user is tremendous! Therefore, they’ll do what it takes to buy the next rock, and sometimes that means stealing from close family members. Remember the grandmother who’s been caring for the kid? She’s the first to start missing items–DVD players, jewelry, TV’s, etc. Anything that’ll bring $20, the price of a single rock, which is only about a 60 second high.

– The fake arrest of snitch Casper was great. I used to do that all the time. It prevents witnesses from thinking the guy is ratting out his buddies.

– I had to chuckle when the lady approached the officers and said, “Every time I come home they’s ho’s in my house.” People do this all the time. Officers can be in the middle of working a mass murder and some Bozo will walk up and ask about something personal in his life—something trivial compared to the scene at hand. Like the old man who stopped his car behind mine on an interstate. Well, I had my gun out and was ordering the driver of a car to  toss out his gun, get out, show his hands, and then lie on the ground. You see, the man was wanted for a recent murder. The older gentleman hobbled right up behind me with his little AAA map asking for directions. AND, he got really angry when I yelled for him to go back to his car. AND, he called in a complaint to my chief because I wouldn’t stop what I was doing to help him.

– Adams and partner pull up behind the murder victim’s father while he’s sitting in his car contemplating shooting who he thinks is his daughter’s killer. The procedure they used to get him out was pretty good. They each had their weapons out and one officer gave the commands while the other partner stood behind the driver’s door of the police car, using the door and the A post (the vertical piece of metal between the windshield and the door opening) for cover. Good stuff straight from Police Academy 101.

Adams cuffed the father without knowing if a crime had been committed. This was fine because officers are permitted to cuff someone, especially someone they believe is armed, for their safety.

– Again, Sammy chases a thug on foot. This time the guy’s pushing a baby carriage loaded with a real baby. The crook tosses a gun out and when it hits the concrete it discharges. This would be a rare occurrence. Normally, the trigger must be pulled for a pistol to fire. Dropping them just doesn’t do it. Sure, it’s happened, but it’s a rare, rare thing to happen. I’ve seen cops loose their service weapons during foot pursuits and the only thing that happens is the gun gets scratched up a bit. Well, there’s the embarrassment thing that goes along with dropping your gun, but that’s another story.

– Finally, we saw a few close-ups of Ben and John’s uniforms. Did you by any chance notice the perfectly ironed and sharply creased shirts worn by the two officers? Well, those razor sharp creases down the front and backs of their shirts are permanent fixtures. They’re called military creases and the shirts come from the factory with them pre-sewn into the fabric. 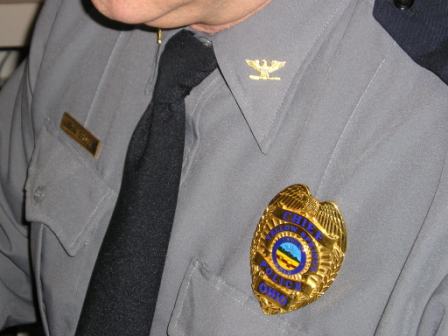 Military creases shown on this chief’s shirt (from top of badge and top of name tag to each shoulder).

By the way, I also noticed the guys weren’t wearing their vests. Sure, there were at a funeral, still…

Now for the big news! Would you like to win the entire first season of Southland on DVD? How about having the opportunity to ask Michael Cudlitz (John Cooper) that question that’s been bugging you since the show first aired? Well here’s your chance. Check out the details straight from the folks at TNT.

Season 2 of the gritty police drama SouthLand is in full swing on Tuesdays 9/10c on TNT, and we have special access to the show’s star, Michael Cudlitz. We’d like to come up with the most creative and original question possible – and that’s where you come in!

Send your question to Michael via this post by Friday 3/26/2010. Ask anything you like, but the winning question must be creative and original and must not have already been covered at: http://www.tnt.tv/series/southland/display/?contentId=56444

The winner will receive Season 1 of SouthLAnd on DVD and will have their question answered online by Michael Cudlitz.

* Prizes are supplied by the SouthLand Team at TNT.