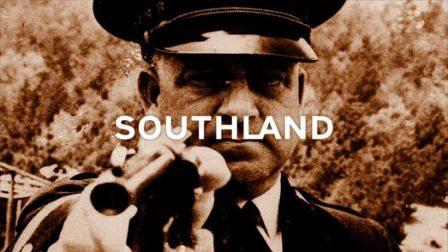 “Sometimes cops find a case can dig them into a hole. Before sunrise Detective Sammy Bryant will discover just how hard it can be to dig yourself out.” 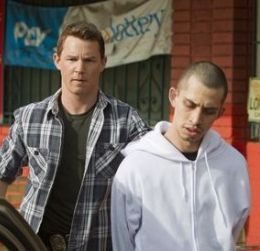 This week’s episode was all about pain—intense physical and emotional pain. And if I didn’t know better I’d think that each of the actors had been through this stuff before. They seem to really understand what it’s like to be behind the badge, facing the world and all the ugly and dirt that life tosses at them. Because what you saw in this episode is what it’s really like out there. And sometimes that’s just a little more than the average human should have to endure.

Sammy’s struggling inside. His nerves are being plucked, like over-taut banjo strings, by a herd of demons that moved into his mind when his partner, Nate, was killed. Those same demons have taken control of Sammy’s reasoning skills, forcing him to act on human emotion instead of a cop’s training and experience. Of course, Sammy’s thought processes have been further taxed by his wife’s affair, which resulted in him having to move out of his family home. And, the wife’s boyfriend moving in with her didn’t help Sammy’s level of anxiety.

Having failed to identify Nate’s killer in a lineup was the icing on Sammy’s teetering emotion cake. Now he’s a speeding locomotive heading straight for rock wall. Sammy fears Nate’s killer is going to walk, so he’s determined to avenge his partner’s death in his own way. Even if it means killing the guy. And he came SO close doing just that last night when he kidnapped a man he thinks killed Nate (I have my doubts that this was the right guy), had him dig his own grave, and then Sammy tried his best to pull the trigger, but couldn’t. So he left, thankfully. Still, by doing this he dug his own hole even deeper. Will the gang come looking for Sammy after they find out what he did to one of their members? And, Sammy just committed a felony—kidnapping.

Shawn Hatosy played an outstanding role this week. His character has been sinking deeper and deeper into what seems like a bottomless pit of swirling emotions, and Hatosy always delivers an outstanding, spot on performance reflective of each scenario. Sure, that’s what actors are supposed to do, but sometimes it’s a bit tougher than normal when you’re playing the part of a cop (cops tend to keep their emotions hidden so it’s difficult to read them). But that doesn’t seem to be a problem for Hatosy, Cudlitz, McKenzie, King and the rest of the crew. Sometimes, I think they’re all reincarnated cops. 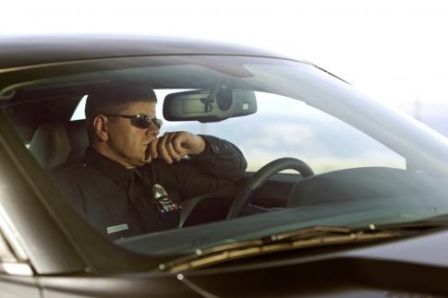 Cooper is feeling the physical pain that comes with a really bad back. He’s also dealing with drug addiction to his pain medication, and Michael Cudlitz does an extremely nice job of bringing that addiction to the screen. Anyone who’s had a problem—a real problem—with any of “codones” will tell you what an intense hold they have over them. Sure, what starts out as pain relief can quickly get out of control, and pretty soon the pills are telling you when to take them and how many to take. The body craves those little white pills like a fish craves water. The feeling is so intense that addicts often find themselves counting the tablets, calculating how long they have before they’ll need more. So, for John Cooper to toss his pills into a toilet bowl, well, that took an incredible amount of willpower. And Cudlitz does a wonderful job of showing what it’s like to lead the double life—a drug addict crawling on the floor of a public restroom who walks out moments later as a top police officer.

Cudlitz also accurately portrays the emotional roller coaster associated with drug withdrawl, such as mood swings, irritability, profuse sweating, and lack of concentration. However, he showed just how tough he is when he remained intensely focused on helping a child in need, for hours and hours. Again, this is what cops do. Even when they are going through some tough times of their own, they put the lives of others first. So great job, Mr. Cudlitz. I knew when we spoke last that you’re extremely dedicated to your craft, and it shows.

– Cooper and Ben are transporting a prisoner who gets a little mouthy, and even asks John if he’s high (Actually, it was the opposite. John was going through withdrawl). So, John pulls what some of the old-timers call, “The dog in the road trick.” You have an unruly prisoner in the back of the car, or van, who simply won’t obey any of your orders. Remember, the slimeball’s hands are cuffed behind his back so he has no way to catch himself should he suddenly be propelled forward. So, the driver slams on brakes sending the prisoner flying forward, slamming his face into the wire cage, or Plexiglass screen. Then the officer says, “Sorry, a dog ran in front of the car.” Ben had his first lesson from the unwritten cop book called, Getting Even With Bad Guys: How To Deliver Subtle Hits, Jabs, and Bruises.

– Chickie tells Ben, “You’ve got to be able to trust the person who’s got your back.” Diving head first into a pool of angry, armed 6-6″ musclebound bad guys is bad enough. Doing so while wondering if your partner is behind you is an awful feeling. A cop absolutely must be able to rely on his co-workers. So, great line, Chickie.

– Dewey asks John, “Why don’t you lay off that s**t. You don’t look so good. You should come with me to a meeting.”

So Cooper’s co-workers are noticing his drug addiction and that it’s affecting his job and his life. This is the point where you have to reach up to touch the bottom. Addiction to prescription medication is an addiction that’s no different than an addiction to heroin.

Again, the entire crew of Southland has done a fantastic job of showing a side to cops the public rarely, if ever, sees. Cops are human with real human problems. And they have to shoulder their troubles while dealing with ours. 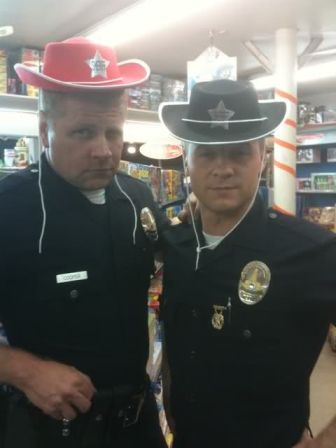 This a wonderful show with actors who really take their jobs seriously.

*Maybe someone from the show will consider showing up at this year’s Writers’ Police Academy. You never know…

1-Plus Rule: Are Police Officers Supposed To Fight Fair?
Scroll to top