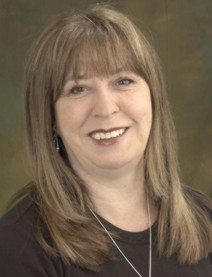 Sheila Lowe is a forensic handwriting expert with more forty years of experience in the field. She holds a Bachelor of Science degree in psychology and is the author of several published books including Handwriting of the Famous & Infamous, and The Complete Idiot’s Guide to Handwriting Analysis, as well as Sheila Lowe’s Handwriting Analyzer software. Her first mystery novel, Poison Pen, received a starred review in Publishers Weekly and introduces forensic handwriting expert, Claudia Rose, who uses her handwriting analysis skills to help solve crimes. Www.sheilalowe.com for information about handwriting analysis. Www.claudiaroseseries.com to read a sample chapter and view a book trailer. Www.superceu.com continuing education for marriage and family therapists and licensed clinical social workers. Sheila@sheilalowe.com

Can Handwriting Reveal a Serial Killer?

He was handsome, charismatic, captivating. He was convicted of the rape and murder of ten women in Florida. He’d probably raped at least fifty.

As with other violent crimes, serial murder is on the increase. Between 1900-1950, an average of 1.2 cases a year were recorded. In 1960 there were 12 cases. By the 1980s this offense had jumped to an average of two cases a month. Since 1977 more than two hundred serial killers have been convicted, with well over a thousand victims between them. More than 80% of all serial murders have occurred in less than 30 years.

Like others of his ilk, serial murderer Robert Joseph Long managed to elude capture over a lengthy period–how? Because he was able to look and act pretty much like the average guy. He knew how to fit into society and appear like the rest of us. But his handwriting held clues that pointed to pathological behavior.

Most people agree that the way a person walks says a lot about him. Someone who swaggers into a room, for example, has a very different personality from one who diffidently creeps along, hugging the wall. Researchers tell us that facial expressions are interpreted the same way the world over, and one’s tone of voice indicates his mood. Similarly, handwriting is a projective behavior akin to body language, tone of voice, and facial expression, and it reveals a important information about motivation and personality, the good, the bad, and the ugly.

Having said that, let me be very clear that there is no such thing as a “criminal handwriting.” In an attempt to identify patterns of similarity in the handwritings of serial killers, I examined the handwritings of a number of notorious murderers. What I discovered was, there was no direct “this-means-that” correlation of a personality trait to a handwriting characteristic; it was far more subtle than that.

It would have been handy if we could neatly package up a syndrome of traits and instantly identify a serial killer or any other type of criminal, but what actually manifests in handwriting are red flags for certain types of pathological behavior, or the potential for it. Because what we see written on a sheet of paper is like a photograph of the past, the handwriting professional can make some extrapolations, but cannot absolutely predict future behavior.

With the exception of Wesley Allan Dodd, the handwritings available for my examination were written after incarceration, when these men and women were forced to toe the mark and curb their deadly appetites. The restraint they had to practice–the need to follow strict prison rules–had an effect on their handwriting, making it appear far more rigid and controlled than in the time leading up to a kill, when their murderous rage was building to a breaking point.

Robert Joseph Long, mentioned in the introduction to this article, has been described as “shockingly brutal.” He beat, raped, and strangled his victims. Long’s handwriting is rigid to an extreme, seen in the tight, angular forms, which indicates a lack of emotional release. Positive emotional release would be seen in a balance of rounded and angular forms. Note the extremely long t-crosses. This straight horizontal movement, combined with the rigidity, reveals his need to dominate and control others.

Wesley Allan Dodd, executed at his own request by hanging in 1993, kept a diary during the time he was killing little boys. His handwriting during the time leading up to a killing is far more “released” (though not in a positive way) and expansive than the second sample, written after he was convicted. You don’t have to be a handwriting expert to see the difference in the two samples. The second one is reminiscent of Bob Long’s, highly controlled and rigid, while the first is out of control. 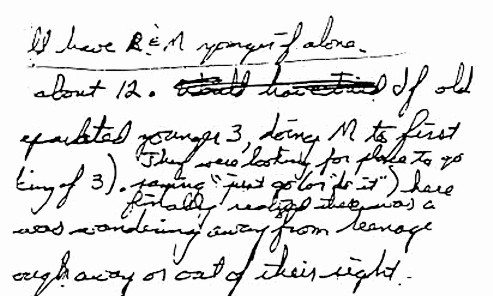 Serial murder is not confined to male perpetrators. Aileen Wuornos, the subject of the movie, Monster, was executed in 2002 for the deaths of seven men. Christine Slaughter Falling (talk about an appropriate name!), whose handwriting appears below, is a very different personality type, but just as deadly. She was accused of killing at least six infants and toddlers she babysat, and was convicted of three counts of murder in 1982, receiving a life sentence that made her eligible for parole in 25 years. In an interview for CNN in 1992, Falling was asked what she would do if released. Her answer: she would like to babysit again, because, “I love kids to death.” She was denied parole in 2006.

Her handwriting sample, written after 10 years of incarceration, is the polar opposite of Dodd’s and Long’s. The extreme roundedness of the writing and the large size, suggest an egocentric person who was constantly seeking love and approval (though clearly, not in healthy ways). The letters “M” on “Me” and “R” on “really” are made in such a way that they look like an X. Such forms are often made by people with a death consciousness, sometimes by one who has experienced a death close to them, or perhaps have received a serious diagnosis of physical illness. In Falling’s case, perhaps her responsibility for the deaths of several young children was on her mind–though not her conscience. This handwriting specimen wasn’t made by someone with a conscience.

Another fairly rare characteristic in Falling’s handwriting is seen in some of the upper loops, such as the “l” on “letter,” which are made in the shape of a candle flame. The flame-shaped upper loop is often seen in one who has sustained a blow to the head. It’s known that when Christine was 8 years old, her mother (who was a 16 year-old-prostitute when Christine was born), hit her in the head with a two-by-four, after which she began having seizures. These flame-shaped loops are often created by those who tend to see the world quite differently than most of us do.

Most, if not all, serial killers came from childhoods where they were abused and/or neglected. Yet, comparatively few abused children grow up to be killers or engage in other types of crime. Many factors, both nature and nurture come into play. Genetics, environment, and the individual’s personal responses to a variety of experiences blend together to determine the outcome.

Handwriting, like personality, is made up of thousands of variables. In order to make any kind of objective assessment, it is important to study the whole picture, not just bits and pieces. The characteristics described above were viewed within the context of larger samples of writing, and are intended only as an teaser to what kinds of information is revealed. Handwriting cannot tell everything about the writer, but it can open a window into the mind, both of the criminal and the “normal” person. Some psychologists find it helps them to get a rapid grasp on what makes a person tick–whether the writer is motivated by the need for power, the need for security, the need to be loved, etc. Especially when used in conjunction with other personality assessment instruments, handwriting analysis can be an important tool for understanding the human psyche.

< * Any typos are all mine (Lee). I posted this last night in a hotel lobby at midnight. Sorry, Sheila.

Friday’s Heroes: Killed In The Line Of Duty
Scroll to top