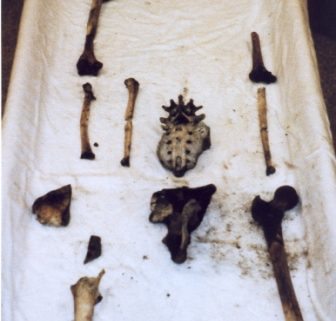 In the past, experts have traditionally determined the sex of skeletal remains by examining characteristics of the pelvis—the pubis is larger in females; the ischium is larger in males. Simple as that. Or, is it?

Suppose the forensics team has mere fragments to study? What if only a portion of the pelvis is available? How about if they only have as little as fifteen percent of the pelvis?

Well, scientists at North Carolina State University have come up with a better, more accurate method of separating the boys from the girls. They’ve learned that there are 20 distinct areas (landmarks) on a pelvis that can be used for sex determination. This was a huge discovery because it meant that even a small section of a pelvis would contain at least some of those distinguishable trademarks. And, to add to this icing on the cake, the new method touts a 98% accuracy rate as compared to a 90% success rate using the standard method of visually examining the bone(s).

Now to be a little more specific about how the process works (easy as 1-2-3). First, a 3-D image is fed into a digitizer, which measures the landmarks on the bone fragment. Then those measurements are compared to a standard. Next…the results. It’s a girl! Pass the cigars.

This new development is terrific news for prosecution and defense teams. Not only do each of them have more accurate results to present to judges and juries, they no longer have to rely on opinion. Defense attorneys won’t need to try and make the forensic anthropologist look like a babbling idiot, and the prosecutor won’t have to make them out as gods. It’ll all boil down to the reliability of a computer and the research of two North Carolina State scientists—Dr. Ann Ross and Dr. Joan Blytheway.

Dr. Ann Ross, on right, with students at NC State

But, this may have all been a huge waste of time. All anyone had to do was ask any teenage boy to identify the bones. After all, they’re pros at determining sex by examining hips.