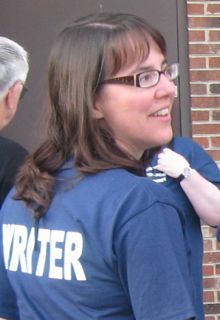 Attend the Writer’s Police Academy in Jamestown, North Carolina from September 23-26. And get a cool T-shirt in the deal! In addition to the popular Firearms Simulation Training (FATS), this year’s event has added a driving simulator, and for a few lucky participants, ride-a-longs in police cruisers!

Hi, I’m Sandra Orchard. Anita Mae, of Inkwell Inspirations invited me by to tell about my awesome experience at last year’s academy. Lee asked if I’d repeat the article here. So here we go.

The event is held at an actual training facility and offers an incredible array of hands-on, interactive and educational experiences to enhance a writer’s understanding of all aspects of law enforcement and forensics. 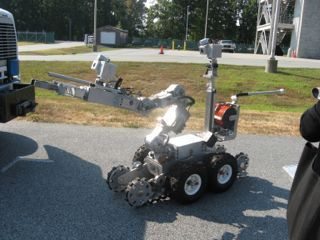 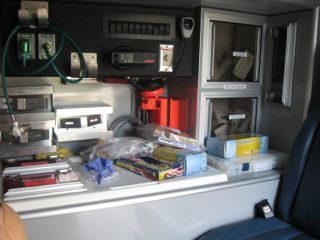 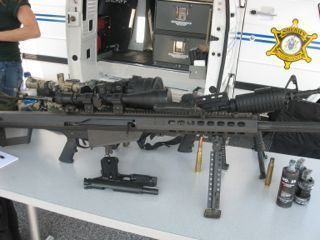 On opening day, almost every imaginable law enforcement and rescue vehicle assembled in the parking lot, and officers were on hand to answer our questions about the equipment. In addition to the sheriff and police command-post trucks pictured, there were motorcycles, cruisers, a fire engine, ambulance, bomb retrieval (that’s little R-2D-2 in the picture), dive team equipment, riot gear, and more weapons than an Arnold Schwarzenegger movie.

Nothing like handling the equipment, and talking to the officers who use it to add realism to your descriptions.

Second came the classes:
We could choose from a vast array of classes such as handcuffing techniques, fingerprinting, forensics, jail search, arson investigation, pepper spray demonstration—yes, one brave officer let himself be sprayed, crash investigation, tools of the trade, sprinkler demonstrations, the list goes on, and… my favorite, undercover work. Considering that I had just signed a contract for the first book in my “Undercover Cops” series with Love Inspired Suspense, I was anxious to glean all that I could from this class. Not only did Marco Conelli, former undercover cop turned writer, share many of his experiences, he gave us glimpses of what went on in his head and heart during that time, which is where the real meat of my heroes’ stories lie. 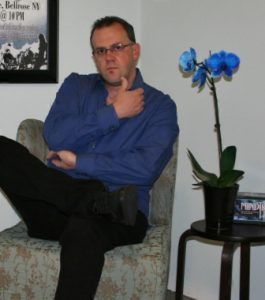 On Day Two…
We arrived at the academy not knowing what to expect. It was kept very hush, hush. We were divided into two groups and ushered into the school one group at a time and stationed in the hall. You need to understand that this is an actual college and students were in classes. Suddenly an armed gunman, wearing a conference ID tag just like the rest of us came charging down the hall.

click the link above to see the brief video

As you can see in the video it felt very realistic. Within minutes police swarmed the hall, took down the gunman, waited for the paramedics to assess him as others secured the building. One officer kept his weapon trained on the downed gunman until the paramedics ran a strip and confirmed he was dead. Officers then escorted the hostages out of the school to be interrogated separately. 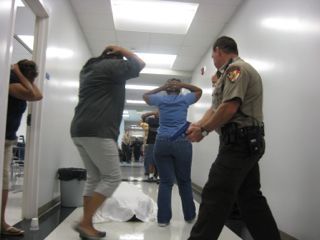 You’ll notice in the picture that the hostages are escorted with their hands on their heads because they have no way of knowing if the gunman had an armed partner. Then we observed the paramedics treating a bullet wound in one of the victims.

As a writer, being in the middle of it, hearing the shouts, gunshots, crying students, tasting the fear and panic and desperation, feeling the cloying atmosphere, I was able to absorb so much that I can now write into scenes in my novels. 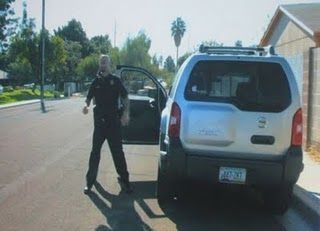 Firearms Simulation Training was an added bonus for attending the academy.

We were given Glocks (some had stun guns) and faced with a floor to ceiling screen that showed videos of shoot and don’t shoot situations like the one pictured above in which the driver jumped out of the car and grabbed the officer from behind. Obviously, I (the partner back in the cruiser) can barely see the suspect, let alone take him down.

When we took a shot, the hit would show on the screen. We were surprised more than once by the post-simulation explanation of why we should have, or shouldn’t have, taken a shot.

For example, in one depiction a man held a baby in a car seat and was wielding a knife yelling at us to stay back. We’re calmly telling him to drop the weapon, unwilling to shoot because the guy might drop the baby! He’s not listening so our shouts grow more urgent. I don’t recall if a single one of us took a shot, because of the danger to the baby. The officer conducting the training told us after the scenario that any officer unable to take that shot would be kicked out of the academy. The man was a serious threat to the life of the baby and the officers and was not responding to instructions.

The most adrenaline-pumping moment for me was when I had to face a hostage taker alone in an office (as depicted on screen). A disgruntled employee had his boss in an arm lock and was waving a gun. I was telling him to put down the weapon, that he really didn’t want to do this etc. But to no avail. All the while, I trained my own weapon at the guy’s head—the only part of his body visible past the hostage. The instant he lifted his gun, I took the shot.

The guy’s brains splattered on the wall behind (yes, it looked as gross as it sounds). The officer in charge of the simulation turned to me and said, “Great shot.”

I pretty much freaked out on him, saying I could have hit the hostage. I was shaking, heart pounding. It was unbelievable. It gave me a whole new perspective on the split second decisions officers are called upon to make and the emotional havoc it can wreak afterward.

~~~~~~~~~~~~~~~~~~~~
In celebration of the launch of her Undercover Cops series, and to show her appreciation to her new readers, on September 30th, using random.org, she will choose one name from her combined lists of newsletter subscribers, Facebook fans, and blog participants. The chosen individual will receive a $25 gift card for their preferred online book distributor. The winner will be announced on her blog on October 1st. If you’d like a chance to win or simply wish to connect, here’s how to reach her:

Sandra Orchard writes inspirational romantic suspense set along the northern shores of Lake Erie in the heart of the Niagara region, Canada. In 2009 she won Daphne DuMaurier Award of Excellence and sold to Harlequin’s Love Inspired Suspense the following year. She is an active member of ACFW, several RWA chapters including Faith Hope Love, and The Word Guild. When not writing, she enjoys hanging out with family, especially her new grandbaby, brainstorming new stories with fellow writers, and hiking or kayaking in God’s beautiful creation. Her newly released debut novel, Deep Cover, is the first in her series, Undercover Cops: Fighting for justice puts their lives—and hearts—on the line.
September 15, 2011/by Lee Lofland
https://leelofland.com/wp-content/uploads/2011/09/New-Picture-18.jpg 320 220 Lee Lofland https://leelofland.com/wp-content/uploads/2017/04/the-graveyard-shift-1.png Lee Lofland2011-09-15 07:14:252017-05-26 15:52:21Sandra Orchard: How To Become A Better Suspense Writer In A Weekend
13 replies