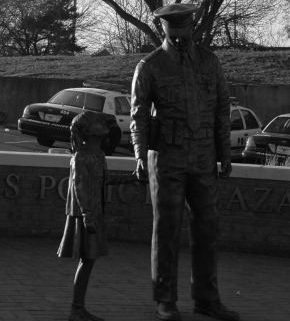 As I sit here the day after a heinous act of violence happened in Connecticut, I am still trying to wrap my head around the fact that someone would target young children.  This blog is usually about cops and criminal procedure. Our make belief world of murder and mayhem has been swamped in a tide of terror that isn’t make belief. That isn’t entertainment. That isn’t easy to put aside. 26 people were massacred at a place once thought safe and sacred—an elementary school.

Like everyone else, I’m sure, we all are reading and seeing this event unfold with heavy hearts and even tears in our eyes. Like other cops, when you watch the news, your mind is filtered with your experience and training, so, I found myself focusing on the first responders. Maybe I was trying to look and evaluate based on my professional experience in hopes that this mind game would distract me from a full realization of the evil that had been wrought. If so, I was wrong. My heart broke with each image. Still I focused on the first images of the first responders at the Sandy Hook elementary school.

I wondered why there were so many firemen at the scene. So many trucks, so many of them so quickly in their red shiny trucks and polished helmets and cleaned up turnout gear. Only later, did I learn that this fire station was literally around the corner from this school, and that the firemen were suppose to be selling Christmas trees that evening to raise money.  When I learned that the Sandy Hook was the neighbor of the firehouse, I knew, just KNEW, those firemen knew those kids faces and many by name. I’m sure that with a fire station so close it was an easy trek over, or just a phone call got the shiny truck and smiling firemen to talk to the kids. Those firemen personally knew most of those tiny victims.  Those men and women were watching “their” school wrecked by horror.

Then I saw the ambulances and EMTs. Most of their machines were silent, and there was no frantic rushing around.  I imagine that all of those EMTS wish they could be trying to save lives and not just stand there aching and silent.  If the EMTS are tending people there’s hope of life. They were still, and this told me it was beyond awful in that school.

And of course, there were my brothers and sisters in blue. Oh so many cops came. Uniformed officers, plainclothes. State, local and federal.  Cops with guns drawn moving through the parking lot and the school looking for evil, hunting for people to save. Cops leading lines of little kids out of the school to safety.  A state Trooper holding the hand of a child, the child swaddled in a police jacket. An image of a cop from my own agency in his bullet proof vest, gripping an M4 and a stern set of his jaw as he leads a man and a child down the road.  I don’t know that agent, but the look on his face seemed to say, “No one, no one will harm this child.”  His face was set in a hard line like he was trying to clench his teeth until they cracked.  On TV he looked menacing, but I bet his face belied the pain in his gut and the clenched teeth were to hold back tears.

“God, I wish I could have gotten here sooner. I wish I had traffic stopped this guy before he got here and he and I had it out on a roadside. But not here.”

“I wish I could have been here to take a report or to drop off a ham when this guy came.”

“I wish today could have been show and tell with my K-9?”

A cop’s life is full of unfulfilled “I wishes.” We’re not super heroes or have a bravado that we think we’re invincible. On the doors of our patrol cars it says “To Protect and Serve.” That’s not a saying, it’s a belief we hold in our heart.  All of those cops wish they could have been there to protect those teachers and those children. I know to a man and woman that if asked, they would, without hesitation say they would go back and be at that front door and confront that gunman, no questions asked. Knowing full well they might not make it out, every cop would take that chance in the hopes of stopping evil, even if it meant giving up their own life to do so.

Like I said, a cop’s life is full of unfulfilled “I wishes.”

All first responders’ professional lives are full of unfulfilled “I wishes.”

We don’t always get to do what we want to do. But we still have to serve. We do what we can.

The EMTS couldn’t save lives. They took their stretchers with such small burdens and kept the lost ones company on their last ride.  The firefighters weren’t letting smiling kids wear their helmets and sit in the big red trucks. Instead, they offered their home to the families of those children, giving them a place to grieve.

Instead of protecting innocence, the cops in Newtown were left to document terror. They were left to photographed and diagram a crime scene in a place that should never have crime scene tape hung. Their bullet proof vests and guns were of no use. Those stern looking cops who tightly held machineguns now tenderly grip little hands as they walk kids to their loved ones. The cops not knowing how to answer the little one’s questions.  Those cops’ badges and uniforms and even their dark sunglasses couldn’t shield them as they looked into the expectant faces of parents knowing they were issuing a life altering words, even as they opened their mouths and uttered the horrible words.  Those cops spoke soft words and watched as hope fled peoples’ faces to be replaced by a pain no one should feel. The cops could only watch as mother’s world imploded or as a grown man openly wept and collapsed. They cops couldn’t protect. All they could do was serve. Do their duty. And ache.

As a cop and a father, my heart breaks at every image I see of the people terror stricken and overcome with grief as they learn they lost their young angel. I see the dumbfound expressions of ordinary citizens aching for their friends and neighbors and the look of ‘why would anyone do this’ and why would this happen—and in my head it echoes the same.

You’ve read my ramblings. I don’t know if it says much about cops and crime fiction. It does say a lot about evil that visits our world every day in large and small ways and the men and women who see it up close. And it says a lot about victims and families.

Now, go find someone you love.

Hug them tight and keep them close.

Tell them you love them.

Rick McMahan is a special agent for the Bureau of Alcohol, Tobacco, Firearms and Explosives. The year 2012 marks his twentieth in law enforcement. Rick’s work wakes him to counties across central and southeastern Kentucky, including Bell County, the area featured in “Moonshiner’s Lament.” His mystery stories have appeared in various publications, including the Mystery Writers of America anthology Death Do Us Part. He also has a story in the International Association of Crime Writers’ forthcoming collection of crime fiction from around the world. In his free time, Rick enjoys writing, and he’s had short stories appear in anthologies such as Techno Noire, Low Down & Derby and the Mystery Writers of America’s Death Do Us Part edited by Harlan Coben.

The Newtown Rifle, And Ammo
Scroll to top