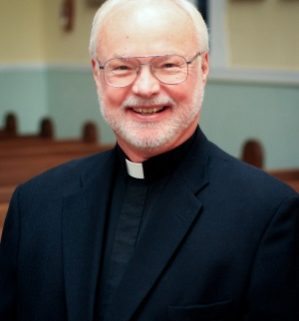 Recently, Judge Bill Hopkins interviewed Fr. Harth about his experiences as a chaplain.

Q: How and why did you become interested in being a chaplain for police, fire, and emergency personnel?

While serving in my first assignment at St. Mary Parish, Joplin, Missouri, I saw a newspaper article about the Joplin Police Department’s chaplain program. Having served as a police beat reporter and a special deputy sheriff, I thought, “I could to that.” I applied and was accepted in December of 1987.

Q: http://www.officer.com/article/10232323/chaplain-murder-on-oak-ridge-dr This article explains how one police officer needed someone to talk to. What struck me was that you and the officer visited the crime scene later. Explain how that can help a public servant overcome a trauma.

A: The officer involved was taken aback by the cold-hearted nature of the crime and felt a need to be able to talk it through. He’s the one who suggested we go to the scene, both so that he could explain to me the circumstances of the death and give me a clearer picture of what he’d met and what reactions that prompted in him. I have since received training in Critical Incident Stress Management (CISM), which provides a means to walk through an event to assist the officer in meeting the situation and moving along in a proper fashion.

Q: Have you ever had unexpected confrontations with suspected criminals that turned out differently than you expected?

A: The bulk of my chaplaincy has been with officers and other department personnel. As a priest, I am occasionally called upon to visit someone in jail. Among those few visits the accused have for the most part admitted to their crimes and sought forgiveness. In one case, an accused murderer avoided talking with me about why he was incarcerated and spoke mostly of his family.

Q: What has been the strangest thing that’s ever happened to you as a chaplain?

A: That’s hard to answer. What some folks would find strange to me are part and parcel of chaplaincy. As those involved in emergency services would tell you, you come to expect the unexpected. Nothing comes immediately to mind.

Q: http://www.officer.com/article/10283502/chaplain-recalls-observations-in-joplin Another chilling article was about the scene in Joplin, Missouri after the tornado in 2011. Explain the most useful things a chaplain would do in such a situation.

A: The answer to that question would need to come from the front-line, first responder chaplains. Those men and women moved from the profound depth of conversations with police/fire/ambulance and rescue personnel describing the horror which they encountered and trying to move through it to simply passing out water and a kind word to those same workers. One chaplain was assigned to remain with a corpse for what turned out to be hours before removal and later did duty at the morgue. By the time of my arrival, operations were being reduced and only local chaplains remained. Part of my mission was to be there for them, hoping to accomplish a little stress management for them. It amused me that about the time I was to return home, they caught on to what I was up to.

Q: http://www.officer.com/article/10233366/chaplains-column-out-of-sight The article talks about the unsung heroes–dispatchers. Without excellent dispatchers, a department can quickly fall apart. You said, “I have been especially touched when dispatchers come to take part in Critical Incident Stress Management defusings and debriefings following traumatic incidents. It shows not only that they’re human but also that they care about officers and victims.” Tell us about how dispatchers can affect a situation and also about Critical Incident Stress Management.

A: If a dispatcher messes up, a situation can go south in a heartbeat. Their professionalism and skills are the lifeline for those sent to a scene, and sometimes they don’t end up hearing “the rest of the story.” They care, and so chaplains try to make it a point to visit with them after a critical incident, not only to hear about matters from their perspective, but also to fill them in if they aren’t sure how things ended.

CISM is a process designed to help those involved in these situations to clarify for themselves what went on, is going on with them, and offer suggestions to secure their proper balance. If circumstances such as nightmares, sleep deprivation, lack of appetite, or other symptoms continue, they are encouraged to move on to the next level of care and seek counseling/professional help. 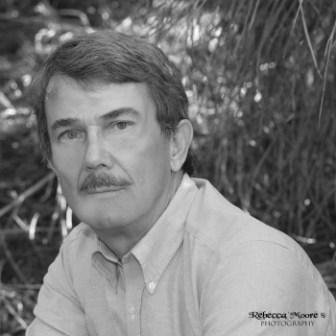 Bill Hopkins is retired after beginning his legal career in 1971 and serving as a private attorney, prosecuting attorney, an administrative law judge, and a trial court judge, all in Missouri. His poems, short stories, and non-fiction have appeared in many different publications. He’s had several short plays produced. A book of collected poetry, Moving Into Forever, is available on Amazon. Bill is a member of Mystery Writers of America, Dramatists Guild, Horror Writers Association, Missouri Writers Guild, and Sisters In Crime. Bill is also a photographer who has sold work in the United States, Canada, and Europe. He and his wife, Sharon (a mortgage banker who is also a published writer), live in Marble Hill, Missouri, with their dogs and cat. Besides writing, Bill and Sharon are involved in collecting and restoring Camaros. Courting Murder is his first mystery novel.

When Judge Rosswell Carew makes the gruesome discovery of two corpses on a riverbank in the Missouri Ozarks, he’s plunged into a storm of deadly secrets that threaten both him and his fiancée, Tina Parkmore. Unsatisfied with the way the authorities are conducting the investigation, Rosswell, who’s always nurtured a secret desire to be a detective, teams up with an ex-con, Ollie Groton, to solve the case before the killer can murder again. Rosswell uncovers a maze of crimes so tangled that he must fight his way to a solution or die trying.

Followon TwitterSubscribeto RSS Feed
Murder In Paradise: No Limits To The Imagination