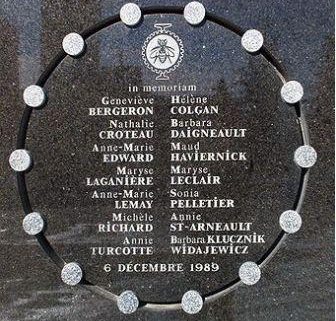 Remembering the victims of the Montreal Massacre, December 6, 1989.

Twenty years ago, tragedy struck at the University of Montreal in Canada. A lone gunman* entered the engineering building, the École Polytechnique, and ordered the people to separate by sex. He declared that all women who studied engineering were feminists and that he hated feminists. He then opened fire.

The gunman left and set out on a rampage throughout the building. By the time he turned the gun on himself, fourteen women were dead and thirteen others were wounded, including four men.

After briefing reporters, Montreal police director of communications Pierre Leclaire discovered that his own daughter Maryse was among the slain.

Police found a rambling three page suicide note, blaming the problems in his life on women and included a list of prominent Canadian women who the murderer said he did not have time to kill.

This tragedy galvanized Canadians to examine violence and misogyny in their society as well as access to firearms. The Canadian government, to honor the memories of the victims, declared December 6th as the National Day of Remembrance and Action on Violence Against Women.

Here are the names of the women whose lives ended that day:

Linda McCabe is the past president of the Redwood branch of The California Writers Club. The branch was founded in 1909 and is proud to call Jack London one of their early members. Linda writes and maintains a fascinating blog she calls Musings from a L.O.O.N.

Registration is officially open and I’m pleased with the number of people who’re taking advantage of the low early registration rate.

Our registration page has been updated. The spammers were killing us with ads.

A large portion of the Writers’ Police Academy proceeds will be going to the Guilford Technical Community College Criminal Justice Foundation. Without them this event would not be possible. The instructors for this event also devote a heck of a lot of their time to answering questions for writers.

* Space for the FATS training is limited to the first 100 people who sign up for it and we’re rapidly approaching that number!

Remember, hotel rooms are limited due to the number of large events in the Greensboro area. Please reserve your rooms now!

Researching Cops: Books of the Trade
Scroll to top