Science is great, isn’t it. Especially if we want to set aside myth and learn the truth about something. After all, science is all about facts, right?

Proving something to be right or wrong is part of good science, and that’s why using sound fact-finding methods plays such a huge role in the truth-finding aspect of law enforcement. We absolutely need to know the truth about crimes and criminals before sending someone to prison for a portion of his/her life. Or, sentencing a person to death.

But, does law enforcement always rely on science to “get their man?” The answer is simple … no. Especially when it comes to police lineups.

The truth is, on one hand lineups are often not very accurate. On the other hand they are. Here’s why.

First of all, there are two basic types of police lineups, live and photo. Obviously, the live lineup is when eyewitnesses view a group of five or six people, hoping to pick the suspect from the group. Police use photos instead of live people when conducting a photo lineup.

More than 75% of wrongful convictions of the first 183 DNA exoneration’s in the United States were caused by mis-identification by eyewitnesses (American Judicature Society).

The least scientifically accurate lineup method is the simultaneous lineup, because human error and emotion is more likely to come into play. For example, when viewing a group of potential suspects at once, the witness may have a tendency to compare one person to another (relative judgement) instead of relying on their memory of specific details. The problem worsens if the actual suspect is not in the lineup, because the witness is apt to falsely choose a person who may only closely resemble the perpetrator of the crime in question.

Sequential lineups eliminate those scenarios. Instead, during sequential lineups witnesses must make a decision about each photo or person before moving on to the next (absolute judgement). 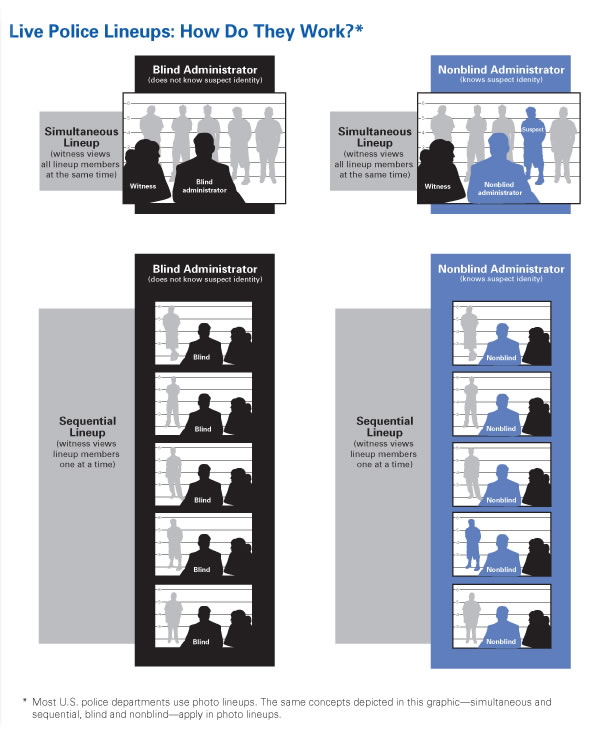 Another method to increase the accuracy of lineup outcomes is to have the lineup conducted by an officer who is not involved in the case, and does not know the identity of the perpetrator (a double-blind lineup). A double-blind lineup eliminates the possibility of an officer of inadvertently/unintentionally transmitting the correct response(s) to the witness (“Are you sure he’s the right one? What about THIS man?”).

Some things that affect the outcome of police lineups:

*Interestingly, people are much better at picking out faces (identifying) of people within their own own race.