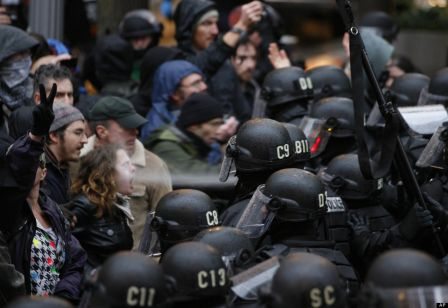 Liz Nichols, at five-foot-nothing, is hardly a physical threat to big, burly, well-armed police officers. But add Ms. Nichol’s tiny body and soft-spoken voice to a herd of angry protesters and suddenly she’s ten-feet-tall and bulletproof. And that’s exactly what she tried to become (unstoppable by police and other officials) when she and her fellow Occupy Portland protesters “sat down” inside a Chase Bank, refusing to move. Admittedly, her goal was to be arrested. Yes, it was her intention to break the law and, when officers entered the bank to remove Nichols and her group, she asked to be arrested.

However, officers did not arrest Ms. Nichols or her fellow protesters. Instead, the officers herded the group out onto the sidewalk where a large crowd of protesters were already refusing orders to disperse and vacate the street (they were impeding the flow of traffic on the street and sidewalks and blocking and interfering with business-as-usual in public places). Not only was this crowd of protesters refusing to obey the police order to disperse and vacate, they had begun to push back and throw items at the officers. By the way, announcements to disperse and vacate were continuously broadcasted via loudspeaker. The message also clearly stated that those who didn’t comply would be arrested. There was plenty of advance notice regarding impending arrests if orders were not obeyed. Everyone had the opportunity to leave. MORE than amply opportunity. The mob chose to ignore the continuous warnings.

Well, Ms. Nichol’s once tiny presence had grown significantly and had now become a huge threat to the safety of the definitely-outnumbered police officers and citizens who were attempting to conduct that business-as-usual. So what options were available to police? Actually, there weren’t many. They could do nothing and allow the protesters to take control of public places and businesses, such as parks, banks, city streets and sidewalks. Obviously, that would be the wrong thing to do. 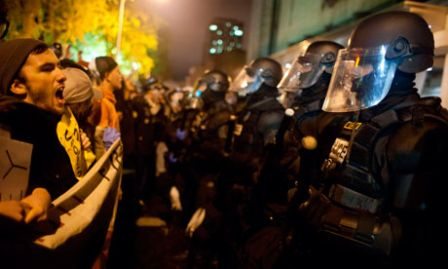 Or,  the protesters could do what’s legal and leave those public places, obtain the proper permits, and then conduct their protests and have their voices heard in an appropriate venue.

A great example of having a message heard, without breaking the law, took place on August 28, 1963, when someone announced his “dream” to over 200,000 people. 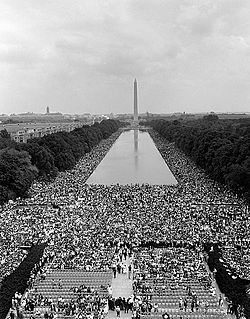 In the case of Liz Nichols (receiving the mouthful of pepper spray in top photo), she and her fellow protesters across the country may have a valid point to make. But, and I’m speaking from the point of view of the police officers, there’s a better way to make that point. Why poke a stick into a hornet’s nest full of officers who have a job to do (remember, they’re acting on orders given from their bosses), and who simply want to do that job without getting hurt or hurting anyone else. Besides, the Occupier’s points are being overshadowed by all the negativity.

Believe me, it’s no fun to squirt pepper spray into the faces of unarmed people, especially tiny women like Liz Nichols. Actually, it’s a bit demeaning to do so. There’s always a feeling inside tugging at your emotions because you’ve hurt someone, even though that hurt is normally temporary and minor.

Please, everyone, place yourself in the officer’s shoes for a moment. You’re outnumbered 50 or 100 to one. The mob is angry. They’re throwing rocks and bottles at you. You have no way of knowing who’s armed and who isn’t. Cops get shot and killed almost every day. These folks are breaking the law. They will not listen to reason, or your commands to move out of the street. And they start pushing back. Harder and harder. Any sign of hesitation and weakness on your part and they push even harder. 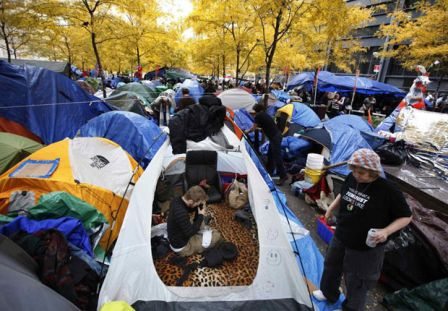 Or, protesters have filled the lobby of your bank and won’t leave, turning your customers away. Hundreds of them have camped out on your property, using your shrubbery as a bathroom. 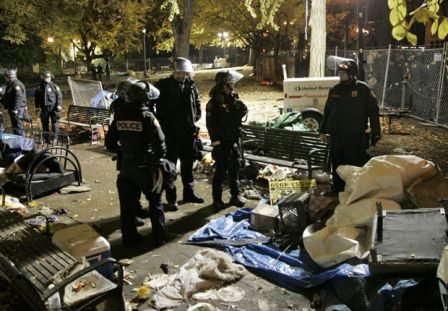 They litter the ground with waste and feces. Tents fill your once beautiful landscape. Your friends and family can no longer visit. Generators hum all day and night. Assaults and rapes take place during the dark hours. And the protesters will not leave, so you call the police.

As a police officer, what would you do, tuck your tail and run? Certainly not. You do your job, using whatever it takes to enforce the law. I’m truly sorry Ms. Nichols got a face full of O.C. spray, but the officers didn’t know her. All they know in those mob-type situations is… 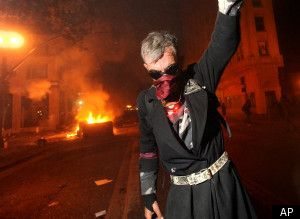 …if walks like a duck and it quacks like a duck, then it must be out to hurt me. After all, a little woman can be as violent as well as any big man. There’s no time in these situations to take a “who’s violent and who’s not” survey. So please, Occupy Folks, sit down and have a meeting. Discuss things. Iron out the details. And for goodness sake, use your heads. There’s got to be a better way. This plan is definitely not working.

* Ms. Nichols has been charged with three counts of interfering with a police officer. 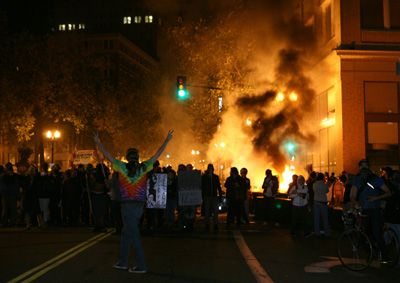 * So far, the Occupy movement has cost cities in excess of $10 million ($6 million in NYC). And who’s footing those huge bills? Yep, the taxpayers. People whose backs are already breaking from the state of the economy.

Portland has shelled out approximately $100,000 just to fix damages caused to public parks by the Occupy protesters. Another $750,000 has been spent in police overtime.