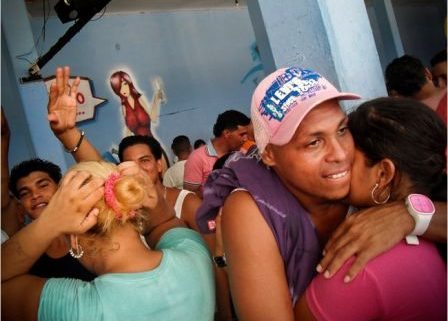 There’s a party tonight and it’s the hottest event of the year. There’ll be Reggae music for dancing in the private club, pot smoking, swimming pools filled with women in bikinis, all the seafood you can eat, a pool hall, and for those who like to gamble…non-stop cockfighting. Yep, this is prison life in Venezuela. Sounds tough, huh?

Sure, gun-toting officers stand guard around the perimeter of the facility, and they even search visitors before they enter. But once those visitors make it inside…It’s Party Time!

Prisoners control everything inside the San Antonio prison on Margarita Island. In fact, many of the inmates are armed, carrying automatic weapons as a means of keeping the peace. Of course, those firearms are also used to guard the boss of the prisoner’s operation, Teofilo Rodriguez, a convicted drug trafficker. And it’s no coincidence that drugs, lots of them, are sold directly from inside the prison. In fact, it’s not uncommon for people to come to the prison to pick up their “product.” After all, the soldiers standing guard over the place only search people entering the prison, not leaving.

Rodriguez, aka “The Rabbit”, definitely rules the roost. There’s a mural of him on a prison wall, several Playboy Bunny-type logos (“The Rabbit”) adorn other walls, and he even employs a personal security team. He’s living the good life.

Children enjoy one of the prison’s four pools

The non-stop prison party often includes inviting rap groups from the outside to perform for the prisoners and their guests. There’s a food stand that sells snacks, four swimming pools—children of the inmates often spend their time in the pool while parents barbeque meat poolside while drinking liquor—conjugal visits, satellite TV, and more.

The perks of this prison are not paid for by the government. Instead, inmates have paid for everything. With drug money, no doubt.

Yes, this prison has everything. Well, almost everything. The one thing they don’t have is escapes. Who’d want to leave?