There’s one job within the police department that really takes special skills, patience, and abilities. It’s a demanding job that requires long, late-night hours, working in extremely dangerous situations, and hanging out with some of the worst criminals in the country.  The job –  narcotics officer.

Police departments take drug crimes seriously, and they take a proactive approach to locating and arresting illegal drug dealers and manufacturers. One reason they take such as hard stance against illegal drugs is because drug activity is often the cause of other major crimes, such as prostitution, larceny, rape, robbery, and even murder.

Drug crimes often spill over from one jurisdiction to another, so in order to better combat the illegal activity police agencies sometimes join together to form a drug task force. These task forces are often comprised of members from local police departments, sheriff’s offices, state police departments, DEA, FBI, ATF, etc. The officers in these task forces have jurisdiction anywhere within each of the member’s home county, city, or state.

To locate outdoor marijuana growing operations, police look for certain things, such as:

– Farm paths that have locked gates.

– Water jugs and fertilizer that’s been strategically placed along footpaths.

– Outbuildings with plumbing and electricity.

– Stacks of potting soil and fertilizer

Officers spend lots of time walking through wooded areas and other prime locations during the marijuana growing season. They also use helicopters and small planes to fly over suspected growing areas. Marijuana has a distinctive blue-green coloring that’s quite visible from the air, even in thick, wooded areas.

Looking down on marijuana plants from police aircraft

Marijuana plants stand out from the surrounding brush. Also, footpaths leading to the crop are like flashing neon lights to officers. Some growers attempt to hide their crops by draping camoflaged netting over their plants. They also grow individual marijuana plants in plastic five-gallon buckets so they can move the entire plant if they think the police may be getting close to their operation. 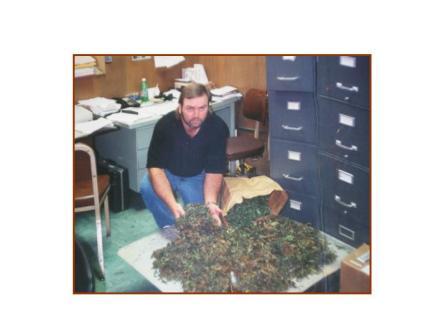 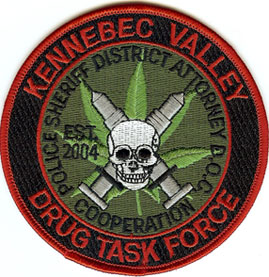 Narcotics Evidence – What Happens To It?
Scroll to top