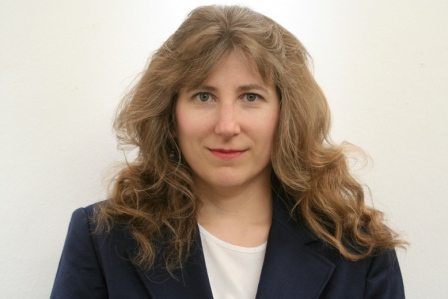 Greetings from a lab rat and fellow writer.

I have been working as a clinical laboratory scientist (also known as a medical technologist) for over twenty years. Just as Lee cringes when he sees police procedures misrepresented in fiction, I grit my teeth when I see laboratory medicine mishandled in books, movies or television.

My profession also suffers from an inferiority complex. Labs are generally tucked away in a hidden part of the hospital and so it is easy to make the invisible department a convenient scapegoat. Or at least that is what it feels like when you work at a large hospital and physicians don’t even know where the lab is located.

On the other side of the spectrum is the representation in fiction where someone can stroll down to the lab and have something instantly analyzed. It doesn’t matter what it is because this lab is magic and the techs do not have to worry about instrumentation or procedures; they can look at anything and give an immediate answer.

I wanted to include a few examples of errors I have noticed in recent novels, but without embarrassing the authors by mentioning the titles. Just let these examples serve as what you should avoid doing with your writing.

A few years ago I read a debut novel set in current day. It was a wonderfully emotional novel and I would have recommended it, except for the fact that the climax of the book included bad logic about blood banking genetics. A character explained how realized his paternity due to his blood typing and that of a child. Except that explanation was too neat and tidy and it doesn’t necessarily work that way.

Sigh. This is not a subject that editors will flag since it is beyond their skill set. It is likely they will assume the author has done the research and that the information is correct.

I recognize it is human nature for writers to ask their friends questions to assist them in their writing. Unless you have a friend who is a laboratory scientist, I would not rely on advice from other medical professionals regarding laboratory medicine. Your friends might be wonderful nurses, physicians, Xray technicians, respiratory therapists or pharmacists, but they are not trained in laboratory medicine. A nod and a “sounds reasonable to me,” will not absolve you if they are answering out of ignorance about another field of medicine.

If you do not know any laboratory scientists, try calling your local hospital laboratory and ask if there is a tech who likes teaching and has time to answer theory questions. You might be calling at a bad time, and if so ask when it would be good to call back. Generally there are predictable busy times and lulls during a workday. Try to ask your questions during a lull when the tech has time to think clearly and elaborate their answers.

This will help you understand the current practice of laboratory medicine, but if you want to know about medical practices in the past I would recommend joining this list serv on the history of science and medicine.

In regard to the history and evolution of blood transfusions, here is a link to a dandy timeline created by the American Association of Blood Banks and it starts with the year 1628.

Medicine has changed dramatically over time and some procedures we would consider barbaric today were standard practice in the past, such as blood letting. This was considered to be a therapeutic method of restoring balance of the four humours. The humours were: black bile, yellow bile, blood and phlegm.

People were sometimes thought to have an imbalance of their humours and could thus be described as: melancholic, sanguine, choleric or phlegmatic.

I mention this because a few years ago I read a novel set in the thirteenth century. I was engaged in the story about a Welsh king and his court until one of the characters was described as coughing so hard he produced sputum. I stopped dead in my tracks.

“Ha!” I said aloud. “It should have been phlegm instead.”

Seriously, I think I may have said that aloud. Which is never a good sign when your readers are taken out of the narrative and start uttering criticisms aloud.

The author could have gotten away with using the word spit, but certainly not sputum. Sputum is the nasty loogies you produce from your lungs and was not a term used in the thirteenth century.

This is also not something an editor will find and flag for you. It probably would pass most critique groups as well. That is unless you had someone like me in your critique group who knew medicine and history and was bold enough to question your word choice and not just look for spelling/grammar mistakes.

To leave you with on a nicer note than blood and phlegn, I wanted to share a few photographs from a trip to France I took while researching my novel Quest of the Warrior Maid. The story is an epic historic fantasy set in the time of Charlemagne. I sought out historical monuments and museums housing artifacts that dated back to the ninth century and before.

One of the places we visited was Hotel Dieu in Paris. It is a hospital with origins that date back to the seventh century. 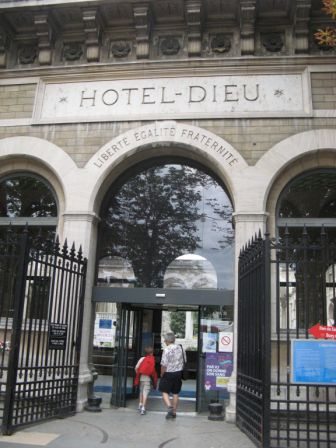 The current building was constructed in the 19th century during the time of Baron Haussman’s massive renovation project in Paris. Over the centuries, previous versions of the hospital suffered from fires and floods. There are historical woodcuts along their corridors depicting some of the history of this hospital. 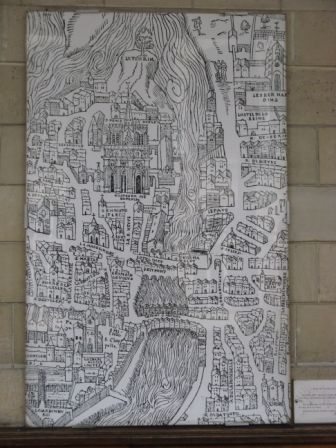 The next woodcut is from the 16th century and shows King Louis XII visiting patients at Hotel Dieu. 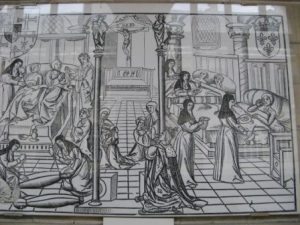 Besides being an active working hospital, it also has hotel rooms available on their sixth floor. They have private baths, room service in the morning and wifi access. If you are as lucky as we were, you might have this as your view from a skylight. 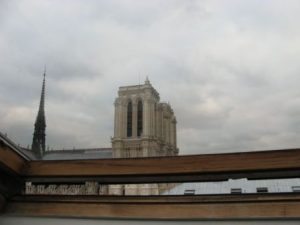 If you are not sure what it was being seen, here is an unobstructed view of that famous building. 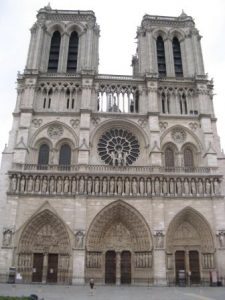 We enjoyed walking outside of our hotel and seeing seeing Notre Dame Cathedrale first thing in the morning.

Although the cathedral was built after the time my story took place, it holds a special Parisian magic that inspired my writing. I also adored seeing the statue of Charlemagne in front of Notre Dame. 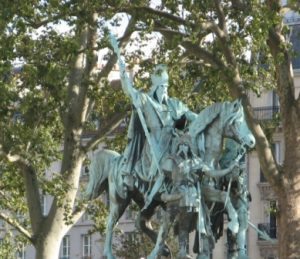 Good luck with your writing and if you have any specific laboratory questions, I would be happy to try and answer them for you. 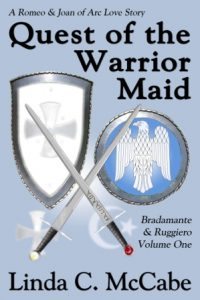 A love foretold between sworn enemies will determine the fate of Christendom. Bradamante, the niece of Charlemagne, and Ruggiero, a Saracen knight descended from Hector of Troy, are renowned warriors who meet and fall in love on a battlefield before being separated. This tale of impossible love is set against the backdrop of a holy war between Islamic and Christian armies shown in bloody sieges in Marseille and Paris. Other legendary heroes such as Orlando and Renaud de Montauban are featured in this saga of chivalry, secret romances, betrayal, revenge, and magic. The story is adapted from the classic, but largely forgotten, epic poems “Orlando innamorato” and “Orlando furioso” written during the Italian Renaissance. Quest of the Warrior Maid should appeal to fans of Arthurian legend, medievalists, Francophiles and Italianophiles. )

Quest of the Warrior Maid is available as an ebook and a trade paperback and is available on a global basis. Please visit Linda’s website at www.LindaCMcCabe.com for more information or to schedule an author chat for your reading club via speakerphone or Skype.

Linda C. McCabe spent a month in France scouring museums and trekking through medieval hilltop villages in the Midi-Pyrenees researching her novel Quest of the Warrior Maid. She is a past-president of Redwood Writers and has had essays published in the Santa Rosa Press Democrat, the Los Angeles Times and Redwood Writers’ anthologies as well as the Centennial Edition of the California Writers Club Anthology West Winds. She lives in Northern California with her husband and teenaged son.