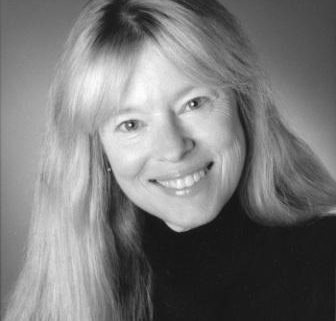 Former attorney Kate Flora is the author of ten books. Her dynamic character, Thea Kozak, returns in 2008 in Stalking Death, from Jim Huang’s Crum Creek Press/The Mystery Company. Finding Amy: A True Story of Murder in Maine, co-written with a career police officer, was a 2007 Edgar nominee. The story was filmed for Court TV and Psychic Investigators. She has gone in a new direction with Playing God and the upcoming The Angel of Knowlton Park, gritty police procedurals from Five Star. She is currently researching a new true crime and plotting a light-hearted series. Flora’s stories have appeared in the Level Best anthologies, in Sisters on The Case, an anthology edited by Sara Paretsky, and in Per Se, an anthology of fiction. Flora teaches writing for Grub Street in Boston.

When it comes to police procedure, mystery readers are a sophisticated bunch. Meeting their expectations means we can’t just make it up. We have to do research. My own efforts to “get cops right” led me to the Portland, Maine police department, where my relationship with my “go to guy,” Deputy Chief Joe Loughlin, led to a 2 ½ year collaboration writing the true story of one of his murder cases, Finding Amy: A True Story of Murder in Maine. 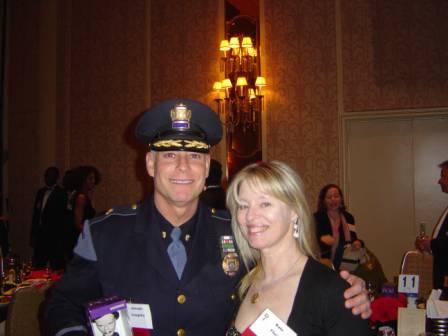 The Maine Game Wardens who helped find Amy’s body sent me to talk with another police department about another body they found, and now I’m nose-deep in another true crime.

Along the way, my research into law enforcement has led me into some interesting situations. I took my local department’s RAD course. I learned to shoot a handgun in the basement of a police department, with bullets in my ears for protection because all the ear protectors were missing. I flagged down an unsuspecting police sergeant at my local gym to ask some questions, which led to a citizen’s police academy in another city. I took an interview and interrogation course along with a bunch of local cops and store security officers. And once, because I wanted to make my character’s experience feel really authentic, I asked my local police chief to arrest me. He did it by the book. So much so that later he e-mailed to ask if I was okay. I was. Shaken but okay. And I got nine pages of notes from the experience.

I’m probably the only suburban housewife on my block with her own bullet-proof vest and handcuffs. And likely the only one with a police officer’s hat hanging on a hook in the entry. I’m sure I’m the only person in the whole Commonwealth of Massachusetts with her own toy replica of a Miramichi, New Brunswick police car.

It’s always a learning process, and it can be daunting. But I try to get it right for my readers.

Here are some of the ways I’ve educated myself about writing cops. 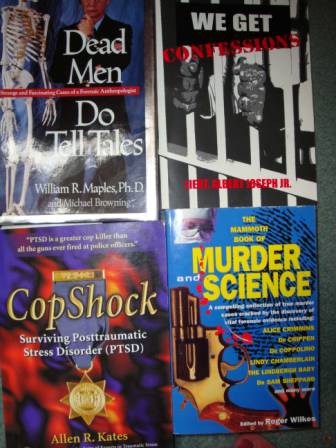 Read David Simon’s Homicide. Cops read it. Cops like it. Cops quote it.

If you can stomach it, read, Practical Homicide Investigation. 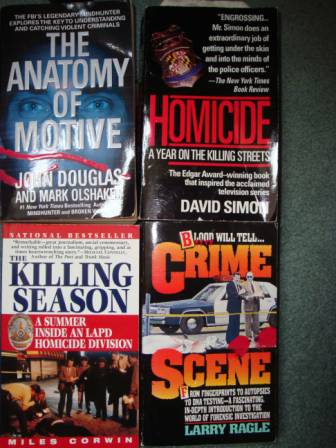 Get yourself a criminalistics textbook.

Even though civilians love the stuff, don’t get your forensics or your procedure from CSI.

Hang Around with Cops

You can read books ‘til the cows come home, but there’s no substitute for the real thing. If you’re going to write cops, you’ll want to know how they talk to each other, how they pick real information out of what sounds like radio squawk to you. What kind of guns they carry and what all the rest of that stuff on their belt is and what it’s for. What they’re looking at that made them conduct a traffic stop and what they’re looking for once that car is stopped. And an observant writer is always looking for the small details. What kind of stuff is on the desk? The Three Stooges. What’s on the office bulletin boards? Pictures of cute puppies. What do they have in the trunk? Everything.

Take a Citizen’s Police Academy. You’ll get real cops telling you the rules they work by–criminal and Constitutional Law, the “use of force continuum,” when you can stop someone, search someone, search a car, etc. Learn how 911 works. The incredible dangers of traffic stops. You may even get to shoot a gun. You’ll also establish police contacts to answer your questions. If your department doesn’t offer one, find another which does, explain your interest, and ask if you can attend.

Go on a ride-along. Many police departments will allow citizens to ride with their officers on patrol. This is a wonderful opportunity to see their world from the inside and to ask your questions. Don’t be a pest. Don’t be a bore. Take your cues from the officer you’re riding with. Often the person you’re riding with considers it a burden to have you along. But if you show interest, most cops are pleased to have someone genuinely curious about what they do and are great at answering questions. You may find yourself seeing your town or city in a completely different light as you learn the history of the buildings on your route-as one officer told me, “that’s where we found the guy hanging in the basement, and over there is where the guy shot his girlfriend and then ran down that alley and shot himself.” And the people you pass on corners and stoops may also come with a history. You never know what you’ll encounter. Once I got to go on a stake-out and actually spotted the bad guys.

Develop your own police source. Ask friends, relatives and co-workers if they know any police officers who will to talk to you. If this doesn’t work, try calling the information officer at your local police department. Sometimes you may meet resistance, but usually, if you explain who you are and that you’re just trying to “get it right,” they are very helpful. And one contact usually leads to another, so you can find the detective, drug investigator, ballistician or computer forensics expert you need.