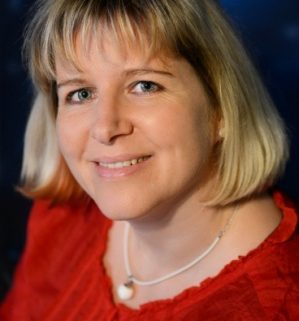 Finn found a pale blue T-shirt at the back of the closet that had a corny slogan only a math teacher would find funny. It had a beer can and the limit definition of the derivative on the front of it. On the back it said Never Drink and Derive.

Pretty clever, right? At least for a math pun. What do you think, how well will this translate into other languages? Not too well into German, considering that the German words for drive and derive are “fahren” and “ableiten”. There goes the pun.

I’m a translator, and I translate books from English into German. That excerpt comes straight from my desk (from Amy Harmon’s “Infinity + One”). Puns like this are part of the reason why translating is more than just looking up words in a dictionary and stringing them together. Translating a book into a foreign language requires careful adaption to make sure that the (in my case) German version creates the same effect on the reader as the English original did. Everything that could take the reader out of the story because he or she has no idea what is meant has to be localized, with the utmost respect to author and story.

In order to do my job properly, I have to become invisible. Have you ever read a book that was not originally written in the language you are reading it in and thought: “Man, that translator did a great job”? Whenever the translator is mentioned in a review, it’s usually because he or she did a poor job. So when reviewers write that the author’s style is fantastic, that the book was so much fun and very easy to read, that the puns were clever and the mystery suspenseful, I feel that I’ve done both the book and the author justice.

When I started learning English at the age of fourteen, my teacher gave me some great advice: “Always assume that the sentence made sense before you tried to translate it.” That’s a pretty good guideline for a professional translator. It’s crucial to fully understand the original book. If I know that something is supposed to be funny but I don’t get the joke, I must have missed something. The same applies to any references I don’t get. This is where translation becomes more than just looking up words, it’s about being pretty knowledgeable about foreign traditions and cultural references.

If the text talks about cream tea, it helps to know that this doesn’t refer to a tea with cream but to a traditional English meal where the tea is actually served with milk, but the scones come with clotted cream. If a character claims that she seems to have moved to Mayberry, it helps to know about the Andy Griffith Show. But what do you do if that show never aired in Germany, and your German readers will have no idea what the lady is referring to? You get creative. After spending weeks trying to come up with TV characters that would create the same image with the German reader as Barney Fife and Andy Taylor, I took a completely different approach by referring to two different tools, a sharp one and a not so sharp one. Mayberry became the toolbox. Footnote averted.

However, I try very carefully to keep the original setting very much alive in the story. If a private eye lives in Los Angeles, I will not move him to Cologne to make it easier for the German readers to relate to him and his surroundings. But if he talks a lot about taking Advil, I might change that to Ibuprofen, though, because Advil is not available in Germany and is therefore unknown to the German readers. By changing the brand name to the agent, it becomes immediately clear that we are talking about a painkiller (my pharmacist loves these consultation visits, by the way).

The German language works differently from the English language, and we even have different gestures. Putting somebody’s head between their knees will not immediately tell the reader that this person must have felt sick – it just seems like a strange thing to do. So you either explain it in a throwaway line, making sure it doesn’t take the reader out of the story, or you find a gesture that is familiar to Germans and conveys the same meaning. However, you need to make sure that you are not doing all the thinking and interpreting for the reader — show, don’t tell.

And there is the dreaded issue of “Sie” and “du”. The German language differentiates the English “you” into a formal “Sie” for people who have either just met or have a business rather than a personal relationship, and the “du” between friends and family. When translating a book you have to make a lot of decisions – how do the characters address each other to make it sound organic, and at what point do the protagonists switch from “Sie” to “du” (assuming they met for the first time during the course of the story)? I once had to re-write an entire scene after finishing the book because it only turned out in the end that the hero and the cop who arrested him at the beginning were brothers. During the arrest, they had a conversation in front of witnesses. I couldn’t use the “Sie” because family members wouldn’t address each other that formally, but didn’t want to use “du” either to keep the element of surprise until the end as the author intended. So I had to carefully craft a conversation that avoided all addressing but without sounding unnatural as not to alert the reader that something must be up with those two.

And this is exactly why I love my job. I love the challenge, and that I get to bring new stories to the German readers.

I once read that submitting for a book for translation is like sending a child to live abroad. But with your translator, there is family abroad who will take care of your child and love it as if it was their own.

Jeannette Bauroth is a professional English-German translator with a 10-year career and a love of books—especially humorous and romantic mysteries. She enjoys working with authors and specializes in indie publications. Together with her friend Corinna Wieja she founded “Indie Translations” (www.indie-translations.com) to help indie authors bring their stories to the German readers. 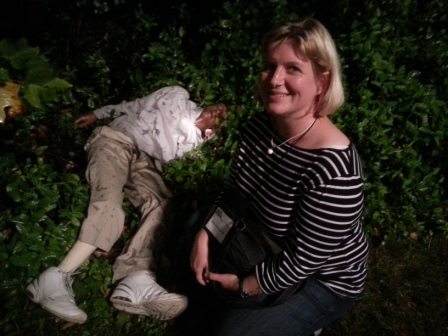 Jeannette investigating a murder at the 2014 Writers’ Police Academy.

When Your Car Breaks Down In The African Bush: #HungryLions