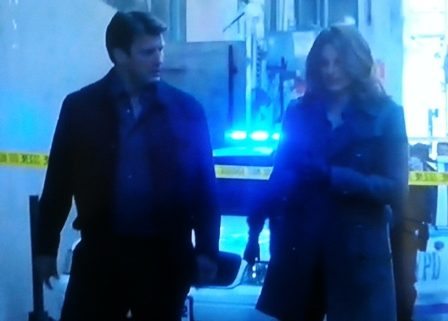 “My hero was a liar and a goat herder.” ~ Castle

This week the show returned to the lighter side. The case du jour centered around the death of one of Rick’s favorite action heroes from the 1980s, a washed up actor found dead in an alley. I’ll let Lee handle the case part, starting with Lanie telling Kate the victim had bruising on his torso without removing his shirt. Really? Even with this unnecessary mistake, I liked the episode. Rick’s exuberance over meeting some his other favorite heroes, made complete by Kate’s eye rolls, provided plenty of humor. We even got some smooches, telling us their marriage is going well. I adore happy Caskett and couldn’t help but smile.

Rick did irritate Kate, however, while packing up her apartment in preparation to move everything either to the loft or into storage. I’ve been wondering when or even if the powers that be would tackle the last vestige of Kate’s single life, and I’m so glad they did. Kudos to the continuity gods. Rick’s offhand comment about never having liked the place really got off with Kate, so much so that she lamented about it to Lanie during a combination girls-night-out/goodbye-to-Kate’s-apartment celebration. Kate apparently felt bad about getting irked with Rick, but Lanie was quick to point out that the reason his words bothered her was because the place was where she had rebuilt her life after her other apartment blew up in Boom. Where she solved her mom’s murder, and where she fell in love with Rick. So true. I love the place, personally, and am sad to see it go. At least it’s staying in the family, since Kate mentioned that her cousin Cynthia is moving in.

Kate’s final walk through of the place was bittersweet. So many memories, both happy and sad, and the ending of a major chapter of her life. She and Rick are now married, meaning that she no longer lives alone… and his home is her home, as well. She’s spent most of her time at the loft for the past year or so anyway, but selling the apartment made it real. I especially liked that she carved her initials on the steps. They were always my favorite part of the place.

I had to laugh when Rick teamed up with the Indestructables. Such excitement and glee. Like a little kid at Christmas, until he found out the reason for their mission. I loved the way he pointed at his wedding ring and said, “Hey, guys… my wife’s a cop…” So funny.

Such an amusing episode. I really enjoyed it, and look forward to next week’s Bad Santa. I’ve been told the end contains a “game changer” for Rick, something that will keep him out of the precinct for an episode or two in the new year (but has nothing to do with his and Kate’s relationship), and that has me on pins and needles. No idea what it might be. Can’t wait!

Actually, I thought the sparseness of Lanie’s comments was a nice touch. After all, the M.E. side of her character is easier to tolerate in small doses. Still, in the brief time she was on screen she managed to spout off that nonsense about peri-mortem (at or near the time of death) bruising on the victim’s torso. This would have been great information had the victim’s torso been exposed. No, medical examiners do not undress murder victims in the street and then re-dress them, including jackets, coats, sweaters, etc., before transporting to the morgue.

I was also a bit curious about the semi-upright positioning of the stretcher that raised the victim’s upper body. EMS crews do this when a patient is experiencing breathing difficulties. Doing so helps them breathe a bit easier, sometimes. I guess the purpose was to present TV watchers a better view of the neck wound and cheesy grayish makeup job. Two words about the makeup, though. Face Off.

I’m not going to delve too deeply into the NONSENSE on this show known as Tory. Instead, I’ll say only this. How does it feel now that you know the government has a secret database (EARIS – Ear Identification System) containing images—two per person, with the exception of Van Gogh—of all of our ears? That’s right, “they” can use those ear images to track down every single person in the country within a matter of seconds.

Thinking back, I remember how difficult it was to ink and roll a suspect’s head across those two-print earprint cards, which, by the way, are way bigger than fingerprint cards. The filing cabinets we used to store them were huge. Tory…puhleeze…

Castle and his buddy the action hero (played by Ted McGinley) entered the drug dealer’s office to steal the car/recorder. 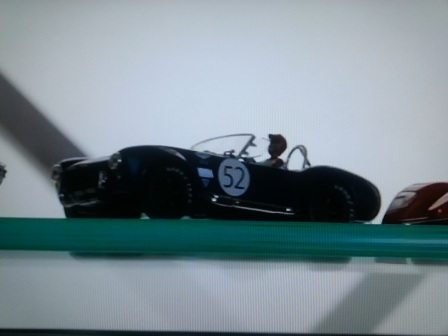 Sure, the writers made a point of having an actor say this was legal because they were citizens, not cops. However, Castle acts as an agent for the police, which means he absolutely must follow the rules/laws that apply to law enforcement, including search and seizure laws. If not, the evidence he “picks up” cannot be used in court.

Still, Fillion is at his best when he’s doing humor. 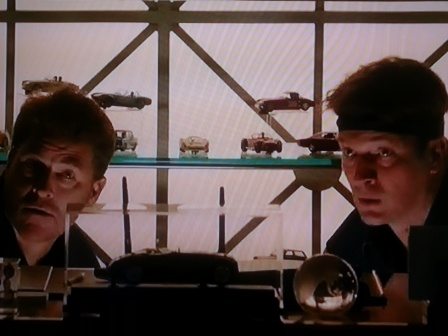 By the way, it was hard for me to not see McGinely (above left) in his former role as Jefferson D’Arcy on Married With Children. I kept expecting him to call Castle, Al. In fact, the entire scene seemed like the type of adventure Al Bundy and Jefferson would undertake to get away with visiting their beloved Jiggle Room, the “nudie bar,” without upsetting Peg and Marcy. So that was a bit of a distraction, but still fun.

Finally, for those of you who watch Castle hoping the knowledge gained by doing so will help you earn a law degree…prosecutors need more than just a single/lone person’s testimony that someone has committed a crime (the son agreed to testify against the drug dealer). Evidence must back up the statement(s). If “he-said/she-saids” were all that’s needed to send people to prison, well, there’d be no one left on the outside.