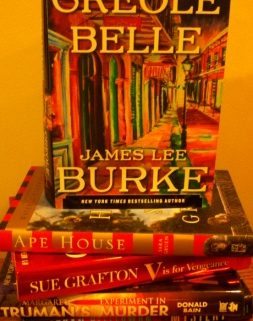 I’ve said it in the past and I’ll say it again here…open the cover to a James Lee Burke novel and you’ll instantly be doused with swamp water and the combined scents of meat fires and crab boils. Burke is undoubtedly the master of painting vivid pictures using words as his choice of medium, and a blank page as his canvas—he’s Manet meets Norman Rockwell.

Creole Belle is a tale of passion for the bayou and rage toward anyone who dares to threaten Dave Robicheaux’s precious Gulf coast. It’s a convoluted story with intricately detailed flavors of the mob, stolen and forged art, white slavery, Nazi war criminals, BP’s oil gushing into the waters of the Gulf, tar balls, the blues, and the love of fathers for their daughters, even if one of those daughters is a hired “hit-woman.” Actually, Burke unleashed a plot so splendidly thick and layered and lavishly decorated with all the trimmings, that readers may worry about the book’s bindings giving way at any moment. But the danger of the book coming apart is, as always, held together by the extremely strong friendship between Dave Robicheaux and Clete Purcell.

Dave and Clete plow through the pages, searching for Tee Jolie Melton, a young blues singer. Along the way, Clete finds the daughter he never knew, Gretchen, and Dave is bursting-at-the-seams-proud of his daughter, Alafair, who’s hard at work writing a novel.

During the hero’s journey, there’s plenty of action, plenty of heartache and angst, and plenty character flaws that ring true on many levels.

There’s also plenty of violence in this book; however, it’s violence that, while sometimes over the top, forces the reader to turn the pages again and again.

Clete barrels his way to the final chapter in traditional Purcell style—sex, drugs, alcohol, and a little Boogie-Woogie to help it all go down. Dave, on the other hand, pushes back when his old nemesis—alcohol—comes calling. But his determination and drive shoves him down the only path he knows, the right one. And he’ll stop at nothing, short of killing an innocent person, to reach a satisfactory conclusion to the crime du jour.

Emotions run high in this book, as high as the Spanish moss that lifts and flutters in the pre-storm breezes, like fine lace gently sprinkled over the branches of live oaks. Ghosts from both Dave and Clete’s past appear in the story to remind us of the daily struggles facing soldiers who’ve seen the worst of the worst.

I highly recommend Creole Belle. Sure, Dave’s a little off-center when it comes to following department rules and regulations, and, to my horror, Burke actually brought out the dreaded “c” word (cordite) in a line on page 363—“Clete and I had stayed high on booze and racetracks and the smell of cordite and…” Still, the book is a great read.

I feel I must warn readers who may be new to Burke’s work…this may not be the best book to start your journey with this author. I suggest dipping your toes in the water first, by picking up a copy of one of his earlier works. Then hang on tightly, because James Lee Burke is an author who, once his writing sets its hooks in you, will never let you go. You’ll be a fan for life.