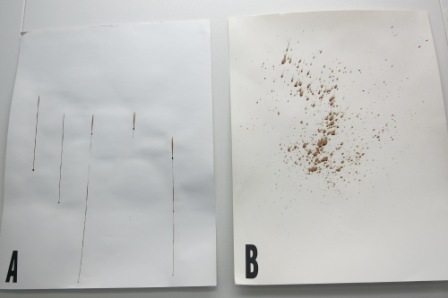 Angle of Impact – the angle formed between the direction of an individual drop of blood and the surface it strikes.

Back Spatter – blood that’s directed back towards the source of energy, such as a hand holding a firearm, or hammer.

Back spatter from close range gunshot

Point of Origin – the point (three dimensional) where the direction of travel (blood droplets) intersect.

* My online Writers Police Academy will soon be up and running. In the coming days, I’ll be asking for a show of hands from those of you interested in signing up. It’s the next best thing to attending a real police academy! More details soon.

* Be sure to stop by Terry Odell’s blog tomorrow for another Homicide-Hussey story. They’re great!