INTERPOL was established in the very early 1900s. The organization’s vision was to connect police from around the world, to help them work together to make the world a safer place.

The International Criminal Police Organization (INTERPOL) is the world’s largest police organization (190 member-countries). The mission: Preventing and fighting crime through enhanced cooperation and innovation on police and security matters.

How does INTERPOL make all this happen?

Of course, there’s more to it than the list above, but it is one point from the list that we’ll address in this article—data and communications and how they relate to the title of this piece, “INTERPOL: Federated Searches.”

Before we dig in, though, first imagine that you’re a deputy sheriff who’s working alone in an area of the county far away from the nearest town. Your closest backup is on a call and thirty minutes away, and that’s if she could drop what she was doing to immediately rush to your aid.

You see a car driven erratically (all over the road, from lane to lane and sometimes from shoulder to shoulder). So you activate your emergency equipment (that’s lights and siren, in case you didn’t know) to initiate a traffic stop.

Once you approach the driver’s window you notice three small children in the rear seat area. After a bit of investigation you learn that neither child is of the same ethnic background and neither are of the same race as the quite nervous driver, a man who’s forged license identifies him as a man named Tommy P. Terrorism. (You later learned the P. stands for Pedophile).

Fortunately, forward-thinking leaders in the deputy’s state decided to join the list of federated states, locations that have instant access, through INTERPOL, to a worldwide database of known, dangerous criminals. A quick check, much like the standard NCIC check conducted by officers across the U.S. (a check for wants and warrants, etc.), and our deputy discovers the driver of the car is wanted in a member country for the murder of 87 police officers. A “hit” from another country indicates the driver is also wanted for the abduction of small children. And, the guy is a known terrorist who’s wanted for the bombing of a school in his home country.

Without access to this database, the officer would need to detain the driver for a very long time, probably more than is constitutionally permitted, to investigate his suspicions. And that’s if anything at all could be learned without access to the international database. More often than not, officers have absolutely no way of knowing if the person they’ve encountered is wanted in another country. This database is VITAL to protecting the officers on the street, us, and our loved ones.

To help separate the various levels of danger and/or severity of crime and other information, INTERPOL maintains a color-coded system of alerts, a series of “wanted posters.” This is the information that’s distributed worldwide. 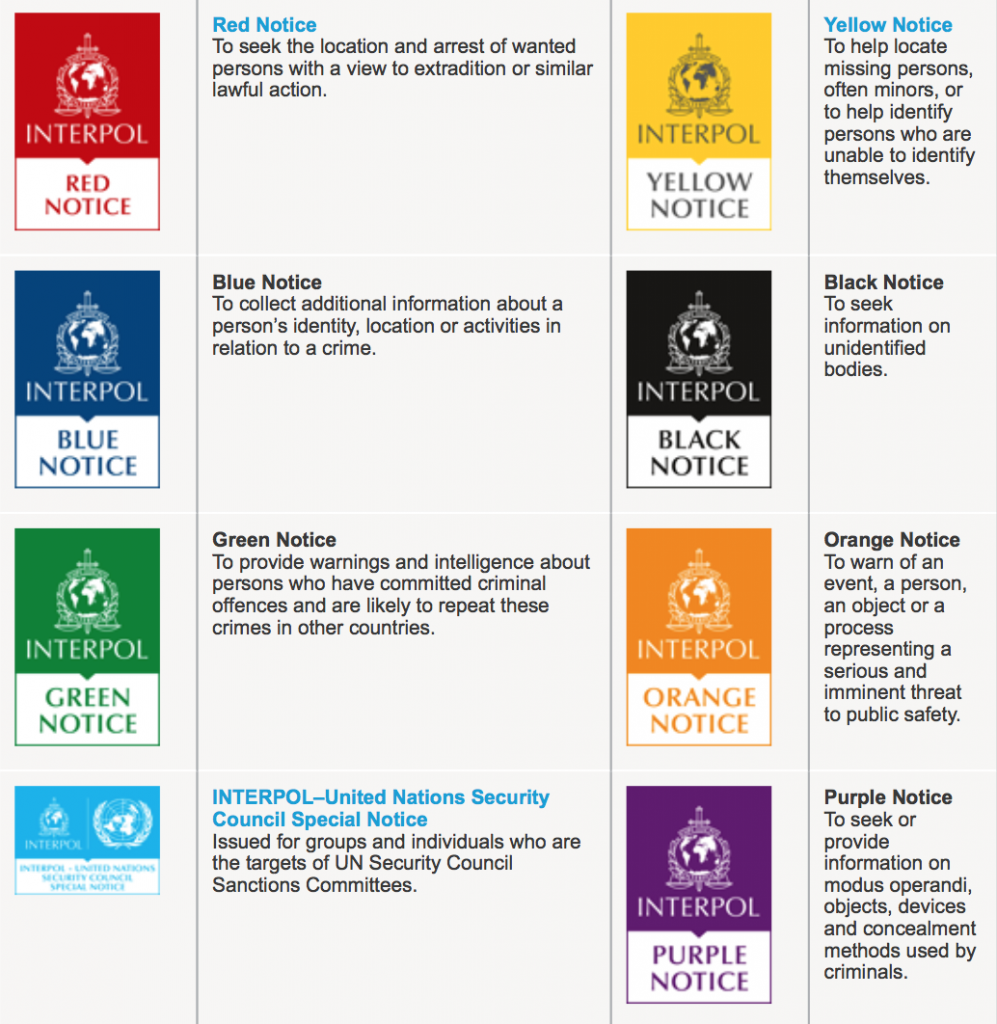 Keep in mind, these notices (red, for example) are not a formal authorization to apprehend someone. In the U.S., we need a formal arrest document and even then it must be vetted by the Department of Justice prior to the arrest.

This database also includes the records of stolen vehicles and equipment (over 7 million), stolen and lost passports, proof of identity documents, visa, etc. (nearly 60 million), and even information about firearms used in commission of crimes.

Now we see how important federated searches can be. A quick call on the radio to is all it takes. The dispatcher will then send the request for information to one of the sharing systems, such as the NCB (see below).

One quick call could save the life of those little kids in the backseat of Tommy Terrorism’s car. And, that same radio call could be the one thing that saves the deputy’s life out there on that dark and deserted country road.

Now lets take a look at the member states. All 50 were eager to join this extremely important service, right?

Again, the process is simple. Officers run a check on a person and the nearly instant results show either the person is wanted for something, or not. This is the same type of result that officers see each time they run a check on someone using U.S. databases. No secrets. Nothing nefarious or ominous.

A few states (less than 10) already have the necessary preparations in place, but still have not signed on. The remaining states (over half) have made no move toward becoming a federated state.

This is NOT part of the immigration controversy. Has nothing to do with it. NOTHING. Federated searches are strictly and totally about international criminals, and it’s been in place for a very long time.

Actually, the first INTERPOL “database,” was established is 1927. Introduced a year earlier, the National Central Bureau (NCB) stated that each country should form its own main point of contact for international inquiries. In the U.S., that point of contact is located in Washington D.C. (INTERPOL Washington, the United States National Central Bureau). The Washington Bureau is jointly managed by Homeland Security and the Justice Department.