Thursday nights were for doing laundry, letter writing, and shoe-shining. However, the Thursday night of this particular week was a bit different because the next day was the first of a three-day furlough for inmate I. Dunnit #64312-123

Dunnit was 13 months into a 24 month sentence in federal prison for providing false information to the IRS. He’d been a model inmate since the first day he set foot in the camp located in the California desert. Working as a tool room clerk, he earned the top bonus pay of $.40 per hour on top of his $.12 per hour base salary. He attended regular Toastmasters meetings, sang in the prison choir that occasionally performed in local churches, including the one attended by the warden and his family, and he played on the tennis team that regularly crushed the local Jaycee team whenever they visited the prison to play a friendly match or two on the institution’s top-notch courts.

Getting a furlough approved was a long shot, but not impossible. Still, Dunnit’s counselor, Harry Pitts, a portly man with a set of jowls that hung from the sides of his face like a pair of cheap drapes, thought he could make it happen. Pitts was a kind man who saw a little good in everyone, especially in inmate I. Dunnit, and to secure Dunnit’s 3-day furlough he’d reeled in a couple of favors, like not telling the warden’s wife about a certain little blond clerk who spent plenty of time in her boss’s office with the door closed and the Do Not Disturb sign hanging on the outside.

The application process had been short and sweet, with the reason for furlough stated as “to re-establish family and community ties.” The other choices on the form seemed better—to attend a religious meeting, attend a court proceeding/hearing, receive special medical or dental care not offered in the prison facility, and to participate in special training or a work detail—but Pitts stuck to his “keep it simple” plan, and it worked. The furlough was approved and signed by the warden.

So when Friday morning came, Dunnit showered and put on a pair of new jeans, a blue dress shirt, plaid boxer shorts, new Ralph Polo socks, and his favorite pair of New Balance running shoes, the clothing his wife mailed to Pitts a week in advance of the furlough.

At 9 a.m. sharp, the officer working control in the front office called Dunnit’s name over the intercom.

“I. Dunnit, report to the main office.”

This was it. His wife had arrived to take him away from the concrete, the tool room, and the 999 other inmates who were also working on ways to get away from the camp. Although, it wasn’t so bad at the camp, since many of the prisoners “go over the hedges” at least once a week.

You see, the prison camp has no walls or fences, and there’s a dirt road that runs beside the place that leads to the main highway running north to San Jose and south to L.A. The first turn to the left is practically a straight shot to Vegas.

Many of the guys leave the prison at night, running through the tumbleweeds and dust, dodging scorpions and jack rabbits, to hop inside a waiting car driven by girlfriends, wives, friends, or family. They drive into town to catch a movie, have a nice dinner at a local restaurant, or simply climb into the backseat for a bit of “desert delight.” And, somewhere just shy of 10 p.m. count time, the fellows slip back onto the prison grounds with bellies full of steak and wine, eyes red of pot smoke, and the look of satisfaction stamped across their flushed faces. They also bring things back into the prison, such as wine, pot, clothing, food (shrimp, steak, etc.), cellphones, radios, and more.

Still, getting away to spend three days at home, eating home cooked meals, visiting with family, sleeping in a real bed instead of a steel slab covered with a plastic-coated mattress, walking barefoot in grass, smelling things other than the guy’s feet in the upper bunk, and even holding a dollar bill and driving a car, well, it would be three days in heaven.

Unfortunately, a three-day furlough ends in … well, three short days. And the drive back to the camp was far too quick. But what a weekend! Saturday, the entire family came over for a barbecue around the pool. The oldest daughter brought her kids who stuck to Grandpa Dunnit like glue. Piggyback rides and hugs. Hamburgers and potato salad. Homemade iced tea and ice cream. And dignity. He had his dignity back, even if it was for only three short days. No one telling him every move to make. No strip searches. No bending over. No squatting and coughing while guards look at and inspect his most private areas. Even model prisoners lose their dignity.

Walking back inside the main door to the camp office was tough.

“Welcome back, Dunnit. Have a good time?” said the officer on duty.

“You see your grandkids?”

“Sure did. They’d grown quite a bit since I last saw them too.”

“I know what you mean. Mine grow like little weeds.”

Dunnit handed the officer his bag.

“Well, I guess we may as well get this over with. Step inside the restroom and take off your clothes and hand me each piece as you take it off. You’re gonna have to pee in a cup for me too.”

Dunnit slipped off his new clothes, and his dignity, neither of which he’d see again until his release date. 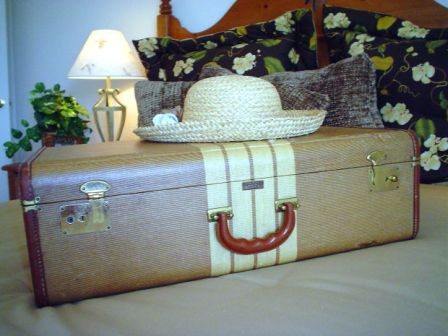 Yes, furloughs are possible for federal inmates. The length of the furlough depends upon the time remaining on their sentence—the less time the longer the furlough. In Dunnit’s case, his was an overnight furlough because he had less than 18 months left on his sentence.

The expense of the furlough must be paid for by the prisoner or his family.

Inmates incarcerated for violent crimes are not eligible to receive furloughs.

While on a furlough, the inmate may not consume alcohol or drugs. They also may not consume any food item containing poppy seeds, since the seeds often show up on drug screens as a positive result for opiate use. The same normally applies to those who are on supervised probation.

Some federal inmates are also granted furloughs when transferring from one prison to another.

**Inmate I. Dunnit is a fictional character. Prison furloughs, however, are very real.

Followon TwitterSubscribeto RSS Feed
Is Your Detective Bad To The Bone?