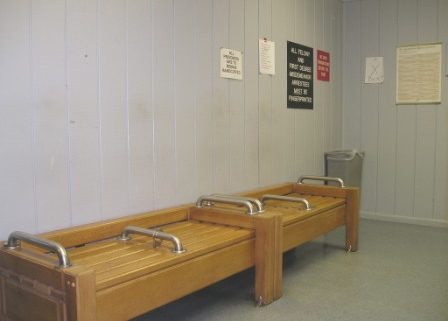 Mr. X is a former business professional who committed a crime that landed him in federal prison. He’s out now and has agreed to share his story with the readers of The Graveyard Shift.

GYS: You mentioned a couple trips you took while incarcerated. I think the readers would be quite interested in those details. Tell us about the first one, please.

Mr. X: I’m sure you’re referring to my transfer from one prison to another, right?

GYS: Yes. I know you went on other excursions during your time in, but this is one that’s the most interesting, and it’s one our readers won’t expect.

Mr. X: Well, the first trip occurred after I’d been in about a year. My counselor called me to his office and said they’d sort of figured my custody status wrong. Originally, they’d housed me in a minimum security prison—one with double fences and razor wire—but I was actually eligible to serve my time in a camp. He then asked if I’d like to transfer. My response was an immediate yes, if he could find one near my family. Who wouldn’t want to go to a camp, right? I mean, to go from hell on earth to a place with no fences, no razor wire, better food, better jobs, less guards, and better visiting opportunities. That was an easy decision.

The arrangements were made in a matter of days. I was going to a camp near my wife who had been transferred for work since I was incarcerated. The camp was run by a private security company—a private prison.

I was, however, concerned and apprehensive about the transfer. Those trips can be awful. They chain you up and place you in the back of a hot van, or bus, and haul you to a jet that’s parked in some hidden spot. Then you fly you to Oklahoma where you may sit for several months before you finally take off for the new place. You may also get shuttled around from county jail to county jail. During that time, you don’t get visits, commissary, work, mail, etc., because no one knows where you are from one day to the next.

Well, that’s what I was expecting, but one of the guys I hung around with a bit—he fancies himself as sort of a jailhouse lawyer—said he’d read that you could apply for a furlough transfer. He went on to explain that it was possible, with the warden’s permission, to actually walk out the gate, hop on public transportation, and make the trip, unescorted.

I figured I had nothing to lose so the next night I approached the warden outside the dining hall and asked him about it. Well, without blinking an eye he said, “Fill out the application and have your family get your plane ticket.” I was stunned, but that’s what I did.

The day of my trip arrived and I still couldn’t believe they were going to let me walk out the gate. At 9 a.m. sharp I was summoned to the office. It was like a dream. I walked from the office to the front gate where a guard asked me a few questions and then opened the gates. The feeling was bizarre.

I walked outside to hugs from family members. They drove me to the airport where I enjoyed a nice meal and a flight across country. The couple seated beside me were pleasant, and I enjoyed a nice conversation with them—about nothing really, but it was wonderful to talk about things other than appeals and how to sneak an extra dessert from the dining hall. I often wonder how they’d have reacted if they’d known I was a federal prisoner.

We landed at a large airport where I was met by my wife—she was my ride to the camp. We planned the trip so that we’d have a little time together. So we stopped by the house for some much needed “quality” time before making the three hour trip to the prison camp. I’ll skip those details.

Later, I arrived at the camp with my bags in hand, kissed my wife goodbye, and went inside the office (no fences, no guards outside, and no gates!). A guard at the desk checked me in like i was at a motel. She then told me which building I’d be assigned to and pointed in that direction. I made my way across a well-manicured lawn and stepped into a nicely air-conditioned building. No yelling, no loud TVs, and absolutely no guards. Not one. It was like I’d been re-born. I was a new man with a glimmer of hope for my future.

GYS: Your next trip was a bit different, yes?

Mr. X: It sure was. After I’d been in a while I heard about inmates being granted furloughs—weekend trips to their homes to spend time with their family. The purpose of the furlough is supposed to help prisoners gradually become accustomed to outside life with their families. Well, I applied for one and it was approved. I went home for three days during the Christmas holidays and it was wonderful.

My wife picked me up in the prison parking lot and we spent three glorious days together, at home, before I had to return to the camp. I was walking on air when I got back.

I’d also gone on short day trips, like to trim roses in the town parks, or to the warden’s Ruritan Club to spruce up the grounds. And they were nice, to break up your time and to see some real people, but they were nothing like my time with my family, at home.