9-2-10 – Agent Michael Gallagher was killed in a crash with a drunk driver while patrolling on the Tohono O’odham Nation. The drunk driver, 40-year-old Angela Mata, had run a stop sign before crashing into Agent Gallagher’s vehicle. She has now been charged with negligent homicide along with other charges relating the deadly crash. 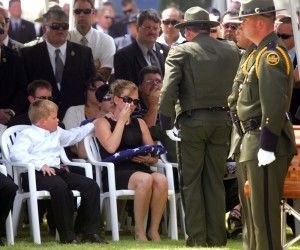 Agent Gallagher is survived by his wife Samantha and their 8-year-old son Quincy.

9-8-2010 – Lt. Dan Kromer was struck and killed by a passing vehicle as he was attempting to aid a stranded motorist on the side of the highway. The driver of the car did not stop and is now wanted by police. Lt. Kromer had served his department for over 20 years.