I’ve delivered Friday’s Heroes to your computers for several years now, and with each passing week the feature has become exceedingly more difficult to publish, having to write about the police officers who lost their lives while keeping us safe.

As I prepare this section, posting photographs and the names of the officers who were killed during the week, I often wonder what they must have endured during the circumstances that led to their deaths.

I’m also reminded of the situations where many of us—former and current officers—barely managed to escape with our lives.

Sadly, some officers aren’t that fortunate.

A week ago today, one of my friends from years past, Deputy Lee House, signed on to work his regular shift. Seven days later, I find myself preparing the most difficult blog post I’ve ever written.

This week Lee House is the focus of Friday’s Heroes. 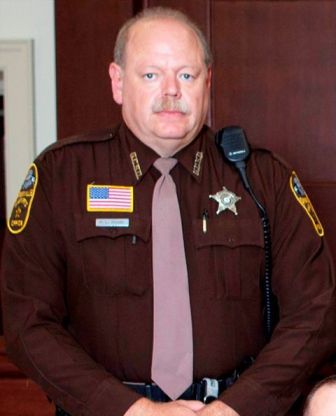 Lee was on patrol when he received a call from dispatch and, as we’ve all done, he headed out to assist the person who needed the police. It was 9:23 AM.

Not more than a minute after receiving the call Lee’s patrol car hit a patch of ice and skidded off a county road, landing in a deep creek after breaking through ice. The car was totally submerged in frigid water.

The car didn’t strike a tree, guardrail, or any other object. In fact, had the creek not been in the path the car traveled, Lee probably would’ve walked away without a scratch. Instead, the car ended up on the creek bottom, out of view and sight of searchers.

No one had a clue what had happened to Lee. It seemed as if he’d vanished without a trace. A multi-state BOLO (Be On The Lookout) was issued by the sheriff’s office shortly after officials learned that Deputy House had not arrived at his assigned call. Officers from numerous agencies and jurisdictions, including helicopters, joined together in a massive search effort.

Reports indicate that cell phone service in that particular area of the county is iffy at best. Phone records show that Lee made two calls at 9:24 AM, just one minute after he last spoke with the dispatcher. A third call was to his department. Neither of the call attempts went through.

Unbeknownst to his fellow officers, Lee was hopelessly trapped inside his patrol car at the bottom of the creek with no means to summon help.

It was just under 24 hours later when an officer returned to the creek and made one last attempt to shine a light into the murky and icy water. He thought he’d seen something shiny deep down, so police divers were immediately called to the scene. It wasn’t long before everyone’ worst fear had been realized. The divers found the car and recovered Lee’s body.

I met Lee House many years ago. We weren’t working for the same department, but our paths crossed during a police training session near Richmond, Va. We hit it off, I think, because of our mutual appreciation of music. We both played guitar.

Our tastes, though, were polar opposites. I enjoyed jazz, Zeppelin, Santana, The Beatles, and even Sinatra and Louis Armstrong. Lee, however, was a die-hard fan of the Ramones.

Denene and I traveled to Lee’s home a couple of times to have dinner, and so Lee and I could play a few tunes on our guitars. I tried and tried to do the Ramones thing, but it just wasn’t me. Sure, I could play the songs, but never cared much for them. Likewise, Lee tried to tone it down and follow me with some AC/DC (Back in Black) and Zeppelin’s Black Dog. It just wasn’t meant to be, so we’d set aside the guitars and settled, instead, for a drink or two of the Absolut Citron Vodka Lee kept in the freezer.

One night after dinner, Lee introduced us to his pets—a gigantic python, a huge black scorpion, and a tarantula. Again, not my thing. Denene’s either. We had a tiny, white poodle.

Lee and I were nothing alike, but we somehow managed to find common ground and remained friends over the years, socializing on occasion, whenever we found ourselves in the same area, which wasn’t often. In fact, thinking back, I hadn’t been in touch with my old friend in over fifteen years. Time really does fly by.

Lee House was a was fine police officer. The kind you’d want your kid to be if he or she ever decided to make law enforcement their career. He was fair and just. And he’d often bend a rule if he thought it would help someone. But he was quick with the cuffs if the person ever crossed the line again.

I just wish his life had been longer.

(above photo taken 20 years ago, during his time working a narcotics assignment)

Well, I suppose it’s time for me to say my final goodbye, but it just wouldn’t seem proper to do so without playing some sort of music. So…

This one’s for you, buddy.

You know I’d prefer Louis Armstrong’s version. In your honor, Lee, I’ll gladly sit through the Ramones one last time. And I’ll crank the volume to the max…

It’s A Mystery!
Scroll to top