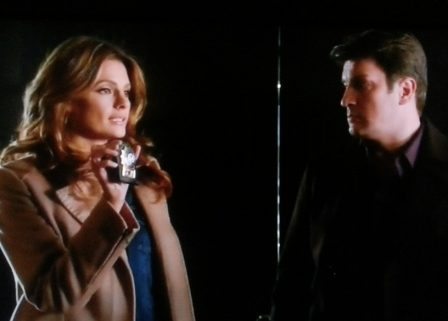 Well, this episode of Castle was much better than the last one. I enjoyed the case more (I’ll let Lee handle that critique) and was enthralled by all of the delicious Rick-Kate moments… even the touch of angst brought on by the wedding dress the fashion barracuda had Kate model.

The first scene with Martha tickled my funny bone. Susan Sullivan is priceless in that role. Nobody else could play Rick’s mom with such theatrical flair. So smart and funny… and Rick and Kate agreed to try to book the Cordova House as a wedding venue. A beautiful place, truly… but it isn’t exactly what I have in mind for them.

Good thing, because Kate’s panicked hesitation during Rick’s phone call — while wearing the gorgeous, yet unusual wedding dress — caused them to miss out on booking the Cordova House for a spring ceremony. She looked beautiful in the dress. Beautiful, reverential, and overcome with emotion. Had the dress made everything all too real? Was she getting cold feet?

Of course not. She’s marrying Rick, right? She loves him… always. We learned later, after the two of them finally got to talk about her hesitation, that her balking about moving up the date came because she missed her mother. What little girl doesn’t dream of shopping for a wedding gown with her mom? Picking out flowers, planning the reception, digging through magazines for ideas. Maybe not everyone longs to do that, but Kate obviously does. She expected to see her mom standing behind her, looking at her in that dress, and all she saw in the mirror was empty space. Had to have been a punch to the gut. No wonder she freaked.

I loved how understanding Rick was after her declaration. She’s a lucky woman to have found such a kind, loving man. Kate was right saying her mom would’ve adored him… that goes without saying. He was Johanna’s favorite author, after all.

I was so happy when Kate told Rick she wanted to get married in the spring after all. Aha! Andrew Marlowe had hinted September wasn’t set in stone, and I’m so glad. Bet we’ll get a wedding finale in May. What do you think?

Loved this episode. It had the best beginning and ending scenes of the season, in my opinion. We got kisses. More than one!

Bring on the next new episode — in two weeks because of the Winter Olympics. Can’t wait.

You know, sometimes it’s difficult for me to write these “bad cop” reviews. Not because there’s nothing incorrect as far as the police procedure and forensics in this show. Goodness knows, there’s always a barrel full of goofy stuff in nearly every episode.

It’s just that I sort of dislike having to constantly ding poor Tamala “Lanie” Jones. Of course, having acted in blockbuster hits such as My Name Is Earl and Booty Call, well, I’m sure she’s used to hearing tongue-in-cheek comments about her characters.

But this is Castle, and Jones’ character is a medical examiner whose main purpose is to “info dump” clues so the killer can be located and arrested within the time allotted for the show. So, the information she provides could and should be, at the very least, somewhat accurate. If her character was spouting off nonsensical information on My Name Is Earl we wouldn’t give a flying flip.

However, Lanie is portraying an expert who should be providing reasonably accurate information to her TV detective friends. At the very least, she shouldn’t screw up things that totally defy common sense. For example, always saying that “based on lividity the time of death is…”

*Remember, my dissection of the police procedure and forensics is for the benefit of writers who do not want to make the same silly mistakes in the current works-in-progress.

Let’s all say this loudly enough so the Castle writers can hear us. “IF LANIE BASES ANYTHING AT ALL ON LIVIDITY, SHE MUST BE ABLE TO SEE THE EFFECTS OF LIVIDITY!”

You cannot see the purplish stained tissue/flesh caused by livor mortis (lividity) when the victim is fully clothed and lying face down with her long blonde hair covering the face. Lividity presents on the LOWEST points of the body; therefore, an examination of the body must be conducted to determine the stage of livor mortis (fixed or not). Even then, lividity is not the most accurate means of determining TOD (time of death), if at all.

Okay, enough of that tired and old rant. Let’s move along to this particular episode. Could it be that even Lanie is growing a bit tired of saying the same things over and over again, especially when the lines are as wrong/silly/dumb/incorrect/ridiculous as can be? Do I detect a silent apology and maybe a slight eye-roll as she once again mentions lividity? 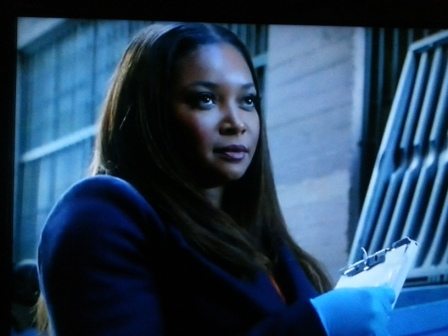 Anyway, the victim of the week was strangled, and Lanie said the killer used “a scarf, a sash, or something.” That really narrows it down, huh? However, I have to question how anyone could make that determination in the field, BEFORE conducting an in-depth exam, especially when the ligature mark is extremely narrow and bears no resemblance to a scarf or a sash. 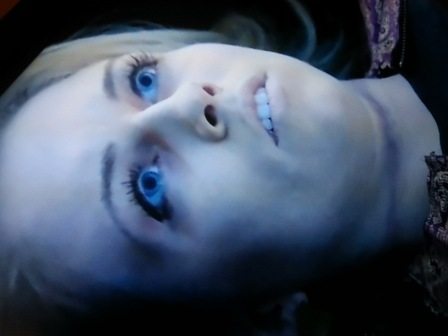 The mark, however, does have the appearance of “or something.” So I guess she called this one right (picture me doing an “eye-roll” here).

Next, Lanie told Beckett she’d found animal hair (dyed blue) on the victim’s neck. She even went a step further to say they’d been left there by the killer. I ask you this…HOW COULD SHE HAVE POSSIBLY KNOWN THE HAIRS WERE LEFT BY THE KILLER?

Sorry…but this show makes me lose my patience, and I tend to shout when the writers force poor Ms. Jones to say stupid things. I’ll try to control myself for the rest of this review.

Okay, the body was found in a dumpster with tons of fabric and other items discarded from various clothing designers. Wouldn’t it be a safe bet to at least consider that someone who works in the high-fashion world just might be exposed to a garment made of blue animal hairs? Or, is it a new thing for all killers to stock and carry blue animal hairs to deposit at the scenes of their crimes. Did the Murderer’s Local 666 union negotiate a new contract that includes leaving blue animal hair at all crime scenes?

Let’s not forget Lanie finding black coral on the victim’s shoe (yes, I’m sitting here shaking my head from side to side). How in the &^*% would she know the stuff was black coral? Is there nothing her Ouija board doesn’t have in its database?

How many of you noticed that Ryan was silently announcing a big clue when he tried to make a call using the landline in the dead woman’s apartment? Ryan picked up the receiver and instantly heard a lot of static on the phone (we heard it too). He frowned so hard his eyebrows almost came together as one. Then he glanced around his immediate area. Obviously, we were supposed to notice (and I did, and I knew exactly why he did it). The static was caused by a “bug” planted in a nearby lamp.

So, we’re to believe that the two women who lived in the apartment never bothered to have the phone company send someone over to repair the faulty line? Wouldn’t you want that problem fixed? And, were we supposed to believe that in New York City, in an upper floor apartment with plenty of windows, there would be absolutely no cell phone service?

By the way, I’ve used a handheld police scanner to check for transmitters. It worked quite nicely. The scanning function locked on a transmitter’s frequency when the scanner was close to the bug. Move away and the scanner began searching for a signal again.

Of course, back in those days some scanners also locked in on cordless and wireless phones. It was not uncommon to drive through a neighborhood and hear everything from people exchanging recipes to someone saying, “Hey, a cop car is driving by. Hide the dope.” Nowadays, that shouldn’t occur since phones have built-in protections. And, it’s not legal to possess a scanner that intercepts phone conversations. Actually, it was illegal to listen in back in the early days, too. But it happened automatically with certain scanners.

Ryan told the dead woman’s roommate that he’d have someone come by later to take her statement. Gotta call BS on that one. That’s his job and he should’ve taken the statement while he was there. That’s part of “clue-gathering.” But, how else would the writers have introduced the phone static that led to the bug in the lamp? This was lazy writing.

Hey, what happened to Beckett’s scar from the rifle bullet that hit her chest many seasons ago? It wasn’t there last night. 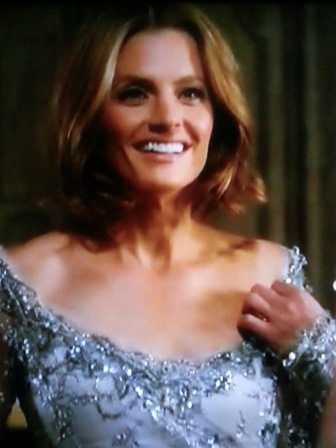 Let’s see a show of hands. How many of you knew right away which character was the killer? 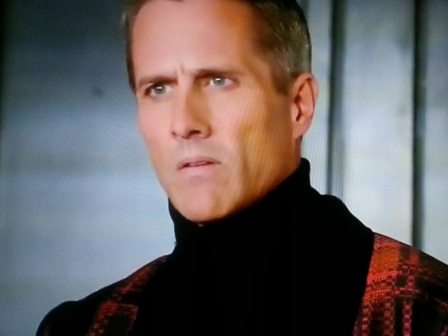 Could he have been more obvious?

Beckett, though, had to learn the hard way that Julian was the murderer. She had to wait for DNA test results to come back (I guess she’d misplaced her copy of the boilerplate script).

She announced to the killer, and to the TV viewing audience, that the DNA of two people were discovered on a hairy, blue scarf found in a dumpster outside of his apartment. Well, that was great information, but to what did the lab compare the DNA in order to reach their conclusions? They had the dead body for comparison to one sample, but what about Julian’s DNA? Where/how did they obtain it? Perhaps the second DNA sample found on the scarf came equipped with a tiny ID bracelet on which was a message that read, “If found please return to Julian. I’m his DNA.”

Well, that brings us to the end of the goofy police stuff (as much as I cared to mention, that is). So let’s end this week’s review with something for you diehard fans of the mushy stuff… 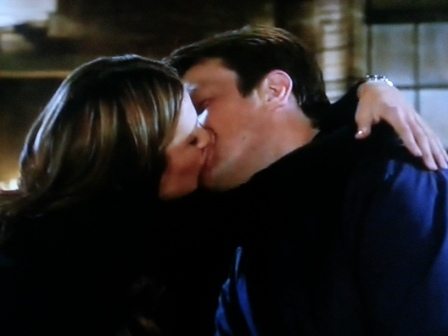 *By the way, I never edit my posts (there’s not enough time in the day), so please excuse the errors.