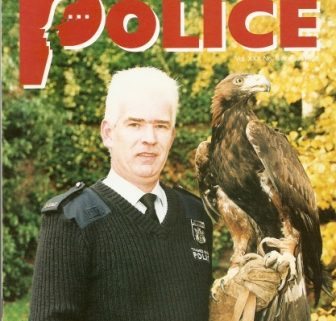 I never envisaged being a Cop. It never crossed my mind that one day I would patrol the streets of my home town as an Officer in the Thames Valley Police. I left school a few months after turning 15. My future was already mapped out and five months later I joined the Royal Navy. This was December 1966.

I left in 1974 having seen a lot of the world including the United States where I spent a memorable July 4th on Virginia Beach with the U.S.Navy. I had specialised in Communications. I was able to read Morse code, use a Signal Lamp and also jam missiles, something there was very little use for in civilian life.

A friend suggested working in the Radio/Control Room with the local Police. I applied and for the next two years I answered 999 emergency calls and dispatched Police Officers to incidents on the radio. As time passed I suppose I grew restless and wanted to be at the other end of the radio. I applied to become a Cop and within two weeks I was wearing a Uniform again. After 10 weeks at Training School I returned to the same Police Station and went on patrol. The town I worked is Reading (pronounced Redding) and is in the County of Berkshire, although the correct title is Royal Berkshire due to Windsor Castle one of the Queens residence. The Thames Valley Police incorporates this county and also Oxfordshire and Buckinghamshire. Reading is a large busy town some 40 miles from London and famous for Biscuits and Beer. If there are any watchers of the series ‘Life on Mars’ this was the time I joined.

My years at Reading were spent on Foot Patrol, Area car, Instant Response Car and also as a Police Motorcyclist. Incidents in Reading were numerous. Every conceivable crime would happen in this town and dull, quiet moments did not occur often. During my years there a number of villains did not want to come quietly and like many Officers received injuries from black eyes through to broken ribs. Crimes with guns were not common place in the 70/80’s but on one occasion I did end up with one being pointed at me before the offender made off. 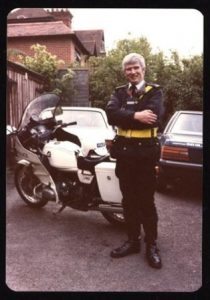 After 8 years I moved to a rural location and a much smaller Police Station. Only 6 Officers and one Sgt. The area was large but the population reflected the Police strength. We covered a number of villages and we bordered with Henley on Thames where the annual regatta is held and known to many people worldwide.

It was while I was here that my private life crossed over into my Police life. My interest is birds and in particular birds of prey. I am a Falconer and together with my wife we have run a rescue service for birds of prey. In the U.K. we have nothing like the USFWS and wildlife crime falls primarily to the Police to deal with. The illegal trade in wildlife is second only to drugs and firearms and the U.K. has its share. During the late 80’s and early 90’s numerous thefts of birds of prey both from the wild and captivity were being stolen. Birds such as Peregrines, Goshawks and even Golden Eagles were being stolen. I started the first National Theft Register for birds of prey stolen from captivity. There was more than I could have imagined and I was successful in getting some back and prosecuting the persons concerned. Birds stolen from the wild and passed off as captive bred was not easy to prove, but the turning point for LE was about to change when DNA Fingerprinting was used on the alleged offspring against the parent birds. Much has now changed because of this and now very few birds are stolen in comparison to 15-20 years ago. I have used DNA fingerprinting many times. Like other crimes it knows no borders and I have travelled all over, England, Wales, Scotland and even Germany during investigations. 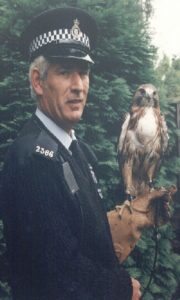 Strangely enough it was dealing with this type of crime that caused me more problems than at any other time. I received many threats. I have had Funeral Directors turn up at my house, infra red cameras installed by the Police in my garden to help protect my own birds against theft following threats and even a determined set up for a cash pay off to drop a case. People involved in wildlife crime can be quite threatening. I can recall one time, having just finished interviewing a suspect. I switched off the recording facilities and he said to me, “I know where you live”. He then reeled off my address. For sometime to come after that I carried a Police radio 24/7.

Although dealing with a lot of wildlife crime I still remained primarily a Patrol Officer using both Motorcycle and (Panda) Car. 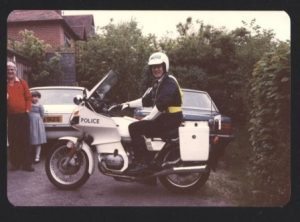 In 1997 I took a break from the streets, returned to Reading Police Station and operated the CCTV cameras in the town centre. I spent a year there before returning to the streets. This was short lived as I had a minor operation in Hospital which went slightly wrong. I ended up with an infection and a trapped nerve and out of action for 3 months. On return to work I went back to operating the CCTV again.

I had only been there some three months when I was asked to go to the Coroners Office to help out there. Coroners Office!!!!! You have to be joking I said. They weren’t though and although I argued it you cannot argue too long against senior Police Officers. I therefore agreed to help out for three months. It was not what I thought it was. Although sad at times it was a busy and a thoroughly investigative role. Murders, suicides, accidents of many descriptions all had to be investigated and an Inquest held. Strangely it was a very rewarding job. The three months turned into 3 ½ years and I actually came out under protest. We were short of Police Officers and I had to return to main line policing and the Coroners Office was civilianised, something that was going to be a great advantage in the near future.

I went back to Reading Police Station and joined The Street Crimes Unit dealing primarily with street robberies i.e. muggings.

Early 2005 I was in a position to be able to retire and pick up a full pension. I could have stayed longer and probably would have but as luck would have it a position became available in the Coroners Office. I applied for it and was fortunate enough to be selected. I resigned from the Police and the rest is history as they say.

My area is West Berkshire. I am still employed by Thames Valley Police and I work in a Police Station. I work very closely with the Officers and in fact, I probably spend more time with Detectives (C.I.D.) than I ever did as a Uniform Cop.

Although now a retired Cop, it really doesn’t feel that I ever left. 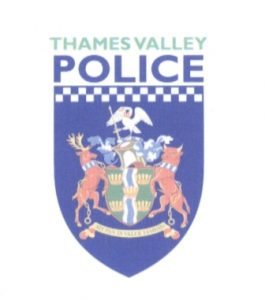