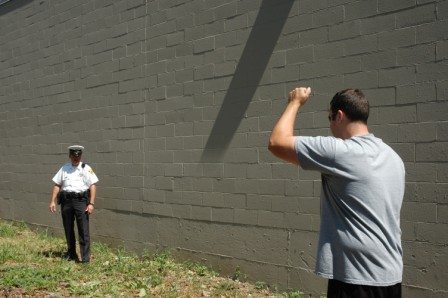 Recently, I had the pleasure of presenting a fun workshop to the San Francisco Area Romance Writers, and sometime during the workshop someone asked about the 21-foot rule. They inquired because they were curious to know if what they’d heard—that it is nearly impossible to … well, read on. You’ll see why she asked.

So, here we go … Confusion at the very onset.

Police officers are forced to make many split second decisions during the course of their careers, and one of those decisions is when to use force, and which level of force should be employed, if needed.

Should a Taser be used when a combative suspect is holding a knife? Should the officer go for her firearm if the suspect is swinging a baseball bat at her head? Is an officer ever justified to shoot an unarmed suspect? Are there situations when officers must retreat? All these decisions are made within one-half to three-quarters of a second. That’s about how long it takes the average human to react to a given situation.

Let’s first examine the scenario pictured above. Here, an officer stands facing a knife-wielding suspect who clearly presents a danger. The bad guy is holding an edged weapon (a knife) in the classic “ice pick” position. Years ago officers were taught that a suspect could be shot, and justifiably so, if he were wielding a knife in a threatening manner while positioned within a distance of twenty-one feet (the 21-foot rule), or less, from the officer. The reasoning was that the suspect was without a doubt an immediate, deadly threat.

Officers were also taught that they’d not likely survive this scenario without using deadly force. The fact is, it’s doubtful that an officer could draw his weapon and squeeze off a round, without aiming, if a suspect began his charge from a distance of twenty-one feet or less. Many agencies and officer survival instructors (I taught this at the academy) have pushed that distance back even further, to 30 feet. This distance plus the time is takes the officer to decide a course of action is called the “reactionary gap.”

The reason for the increased distance is because not every scenario is identical. Not every officer reacts in precisely the same manner. People perceive things differently. Some suspects are faster than others. The list goes on and on and on. Twenty-one feet is not enough distance in many instances.

Suppose the officer properly assessed the incoming threat and managed to draw his weapon and fire. How long would it take to think about and perform those two basic tasks (draw and fire)? Inquiring minds wanted to know so they conducted a series of experiments.

The fastest officer tested was able to draw his weapon from a security holster in a little under 1.5 seconds. The slowest was a about 2.25 seconds. Sounds pretty fast, huh? Maybe not, and here’s the why not. 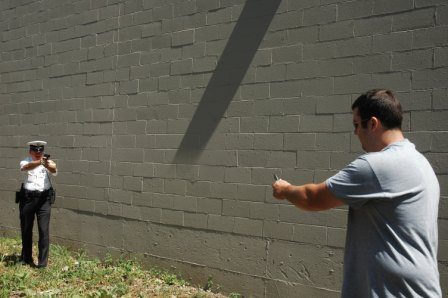 Today officers must rethink the twenty-one foot rule a bit. Sure, the thug (a universal term for a “bad guy”) is potentially a deadly threat, but not an actual deadly threat until he makes some sort of hostile movement toward the officer. In other words, the 21 foot (or 30) distance is not automatic permission to shoot. There MUST BE a THREAT!!

Of course the officer should have his firearm in a ready position as soon as he perceives the threat. By the way, this is definitely a situation where the officer should always choose his firearm over a non-lethal weapon, such as a Taser or pepper spray. Remember the the old saying, “Never bring a knife to a gunfight?” Now there’s a new addition to that rule—“Never bring a Taser to a knife fight.”

The key to knowing when it’s time to shoot is simple. If the officer feels that his life, or the life of an innocent person, is at risk, then the shoot is justified. However, the officer must be prepared to articulate his reasons for pulling the trigger. Was the suspect making stabbing motions while advancing?  Was he charging the officer? Was his/her or the life of someone else in jeopardy? Was there a threat of serious bodily harm?

There are reasons, too, that may not justify the shoot, such as the suspect being so intoxicated that he couldn’t possibly have followed through with the threat. In short, the threat must be real, or at least perceived as being real in the eyes of the officer. The officer must also be able to recognize when a threat is over. If the suspect drops his weapon, the justification for deadly force ends immediately. The same is true when a suspect uses an automobile as a weapon. When a driver uses his car to charge an officer, the officer may shoot to stop the threat. However, when the car speeds past the officer, heading into the sunset, the threat is over. In most circumstances the officer may not shoot at the fleeing car. Where would those rounds go? Besides, bullets won’t stop a moving car. Suppose the driver is shot? What happens to a driverless car that’s careening down a busy street at 50 mph?

When any suspect points a firearm of any type at an officer, deadly force is immediately justified. 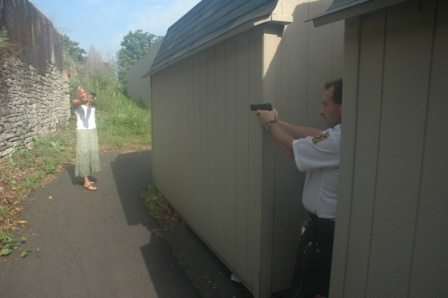 In situations like the one pictured here, it’s not uncommon for officers to hesitate briefly before using deadly force to stop the threat. Why? Interestingly, officers sometimes perceive women and children as being less of a threat than a male suspect. That’s why simulated firearms training sessions, like the ones we use at the Writers’ Police Academy, use both women and children in the shoot/don’t shoot scenarios.

The woman in the picture above is very much a deadly threat, therefore, the officer is justified in using deadly force.

Interestingly, but not surprising, a couple of people at the RWA session last weekend said the woman in the photo above was in no way a threat to the officer. Of course, I immediately asked why they felt she wasn’t a threat. My favorite response was, “Because she’s wearing sandals.” Another was, “He’s bigger than she is.” And, “She’s a woman. He should be able to handle this without shooting.” These responses are fairly typically among citizens (and writers) who’ve never been involved in a deadly encounter like those police see on a regular basis.

No doubt about it. This IS a deadly force situation. The small, sandal-wearing woman is very much a threat to the officer.

The 21- (or 30) foot rule is not actually a rule. Instead, it is merely a guideline officers use when determining the outer edge of the reactionary gap.

Obviously, officers do not pull out a tape measure to examine distances during a dangerous and deadly situation. 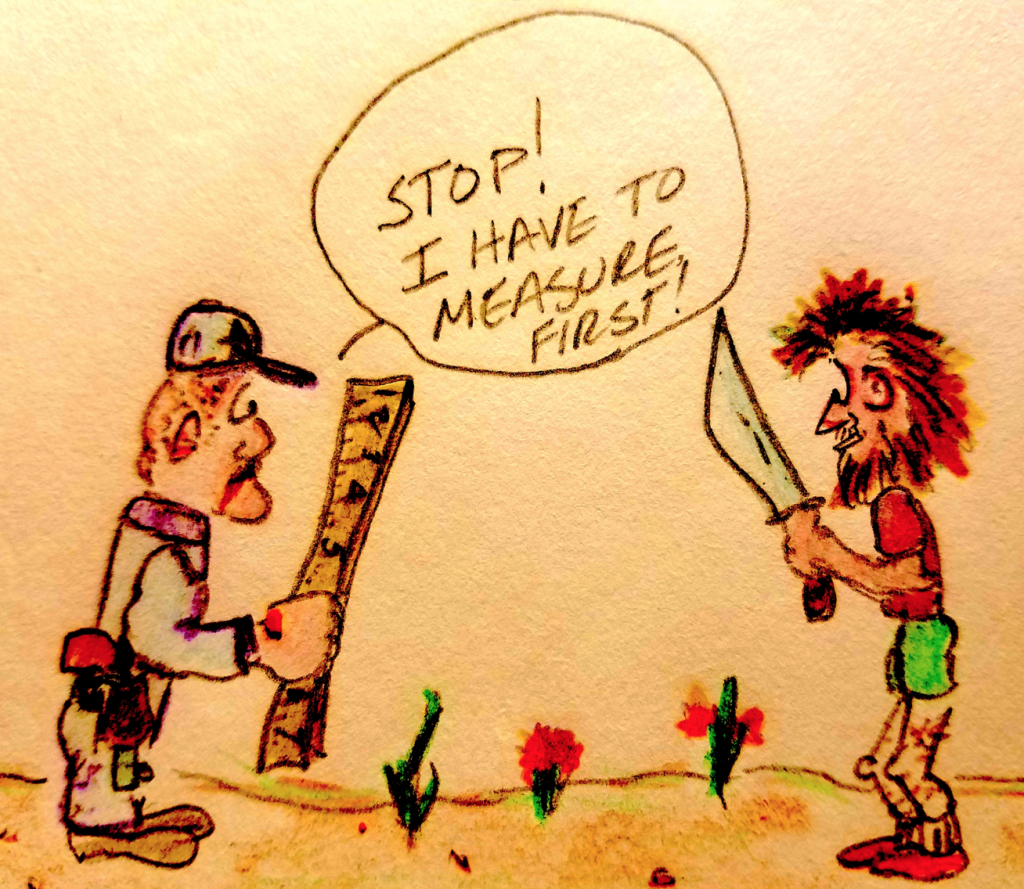 However, they should practice the drill over and and over again until they’re comfortable with how and when they should react and to learn which method works best for them. Retreat is certainly an option to consider if the officer feels that’s the best move at the time.

The big takeaway from this piece is that officers are legally permitted to use deadly force whenever they feel their lives or the lives of others are in jeopardy. And, that the courts have ruled that we, as ordinary citizens who were not at the scene of an officer-involved shooting, may not second-guess how the officer perceived the threat(s) they faced at the precise moment deadly force was used. That’s it in a nutshell.

Let’s see how well you do with a short true or false quiz. The answers are posted at the end.

*By the way, police officers are not taught to kill anyone. Not ever. Instead, they’re taught to stop a threat to life. And, it’s not always a firearm or edged weapon that threatens human life. Victims, including armed police officers, have been beaten to death by suspects using no more than their bare hands.

Scenes from the RWA meeting last weekend in Emeryville, Ca., across the bridge from San Francisco. 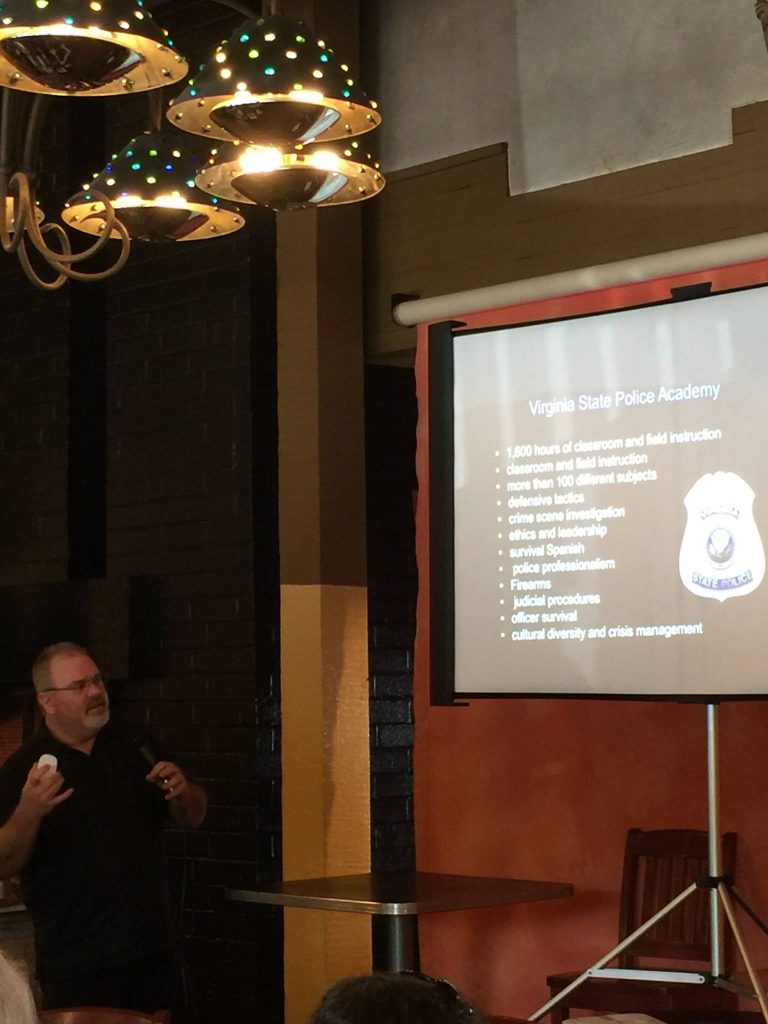 The Q&A portion of the program was quite energetic. Actually, this was the exciting scene at the time we gave away a free registration to the Writers’ Police Academy. 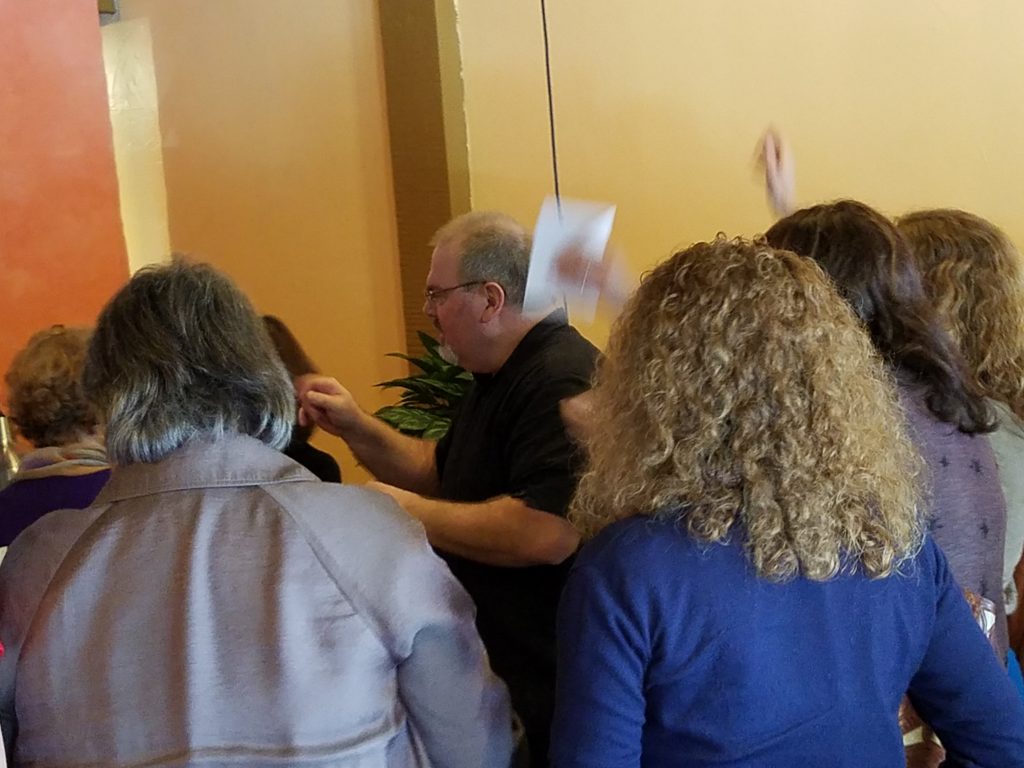 Speaking of the WPA, Peggy (Margaret) Lucke decided to show off her WPA attire. 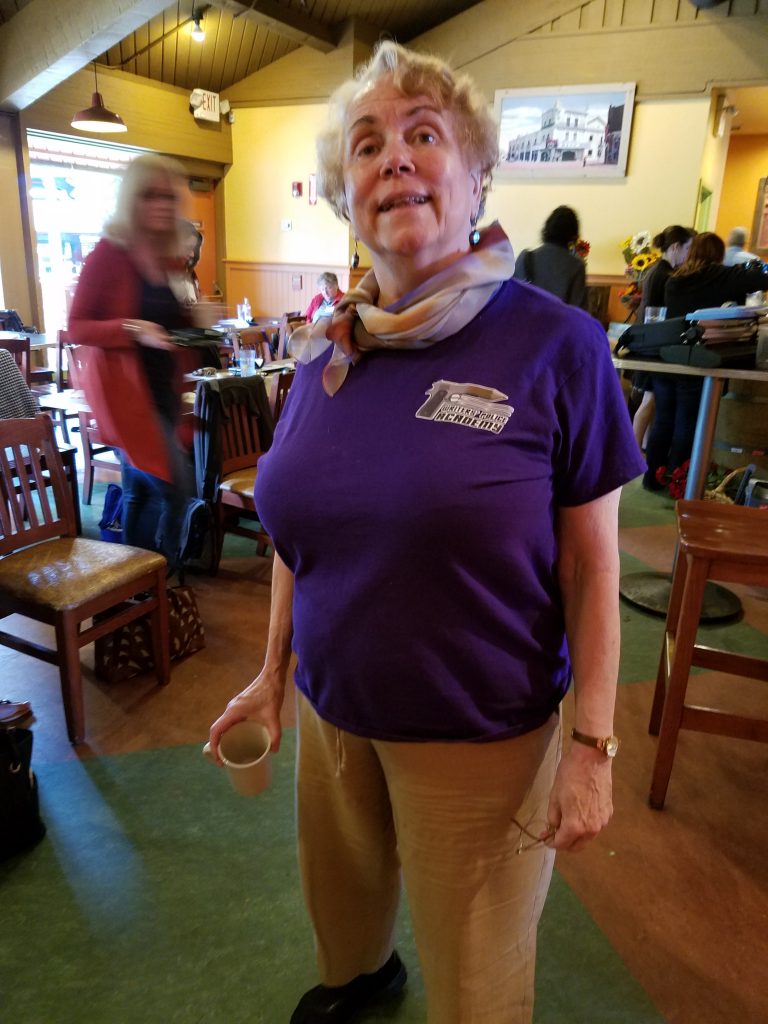 Book translator Jeannette Bauroth and her husband, Mike, stopped in all the way from Germany! By the way, Mike is the guy who goes to the homes of the recently convicted (of certain crimes) to confiscate their firearms. 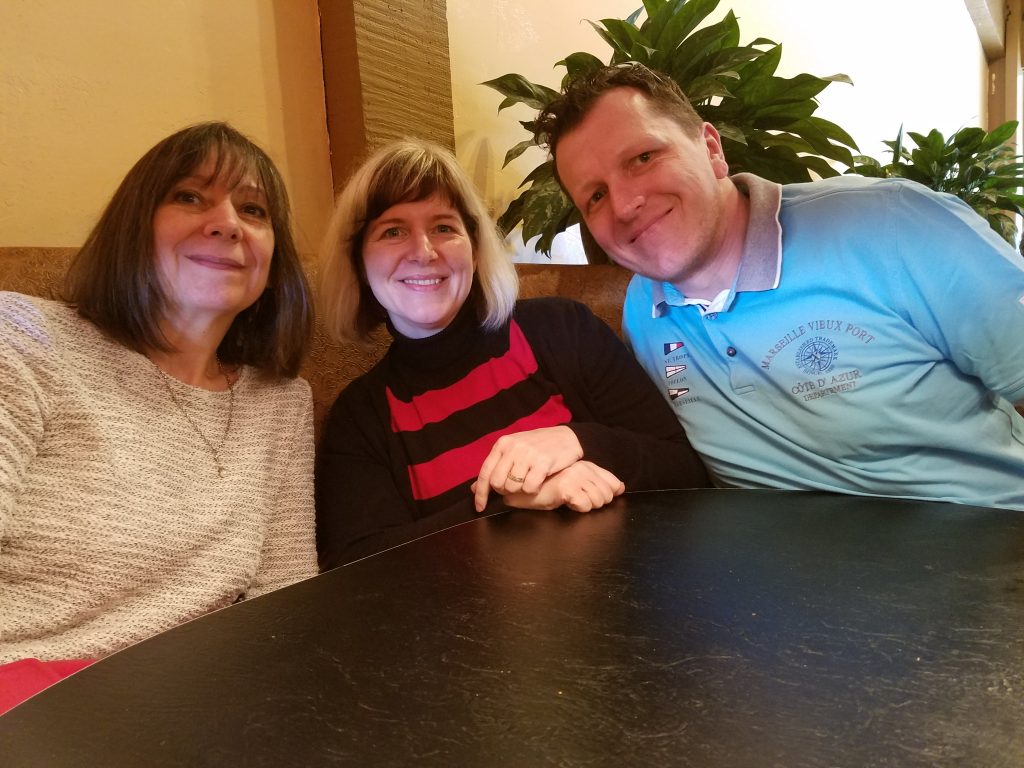 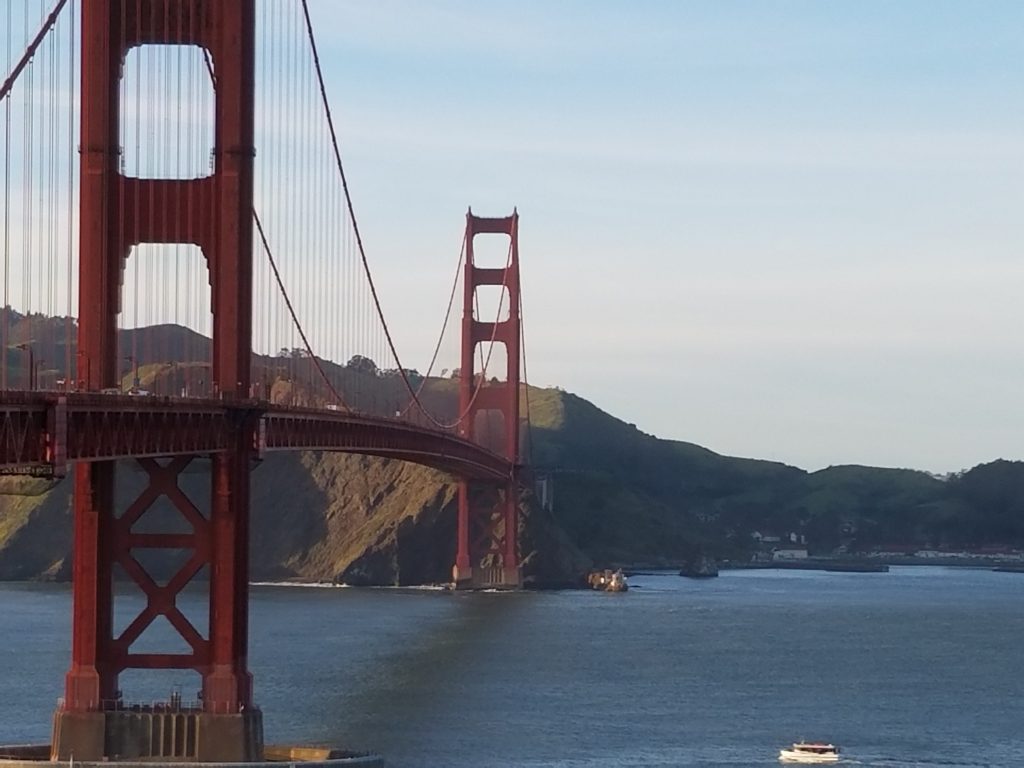 Followon TwitterSubscribeto RSS Feed
Cops: Why They Look And Act “That Way”