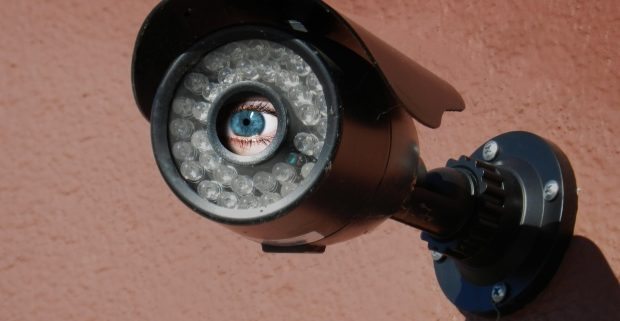 President George W. Bush created the Department of Homeland Security, a move that merged several agencies under a single umbrella—Coast Guard, National Guard, FEMA, Customs and Border Patrol, TSA, Secret Service, and a gaggle of other three-letter agencies, with the exceptions of the FBI and CIA.

This move was supposed to create a safer America—“a concerted national effort to prevent terrorist attacks within the United States, reduce America’s vulnerability to terrorism, and minimize the damage and recover from attacks that do occur,” according to the National Strategy for Homeland Security.

Well, here’s a bit of Homeland Security news that just might give you reason to scratch your head and wonder…

1. During the past 31 months, over 1,300 Homeland Security badges and official credentials have been lost or stolen. These were not items kept in a warehouse, though. Instead, they were the ID’s and badges issued to active-duty agents. 165 department firearms are also missing (lost or stolen). Antonio Ramos, a muralist, was killed in Oakland last November. The weapon used to commit the murder was stolen a couple of months earlier from an ICE officer in San Francisco.

2. The BioWatch program is an initiative of Homeland Security. Its purpose is to detect the release of pathogens into the air as part of a terrorist attack on major American cities. Now, I’m slightly familiar with this program, and Denene is extremely familiar with it. The concept is great. The program works, and it works well.

What? You didn’t know there are “sniffers” in position all across the U.S., especially in cities that are particularly attractive targets for terrorists? Well, they’re out there and there are plenty of them, you just don’t recognize them because they’re mingled in with all of the other hardware attached to every piece of vacant space on telephone poles and other such city or utility real estate.

Since terrorists seem to set their sites on gatherings of large crowds, such as the Super Bowl, Homeland Security decided to place a few portable sniffer boxes in and around downtown San Francisco in advance of the big game next Sunday. I know, the game will be played in Santa Clara, not San Francisco. Santa Clara, by the way, is actually 40 miles away from San Francisco, a distance that can sometimes take a couple of hours to travel if the freeway traffic is in full bloom.

Anyway, Homeland Security officials placed portable sniffers throughout downtown San Francisco, and they chained the boxes to light poles. To power the units they ran the electrical cords to the power poles and tapped into city current. 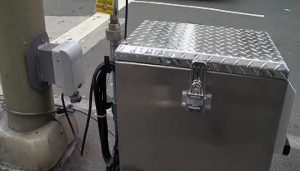 Now, I’m no rocket scientist, but I believe anyone who can figure out how to plug-in and unplug a basic toaster could surmise that cutting the cord or pulling the plug on this high-tech toxin detector would be all that’s needed to set an evil plan into motion. And we mustn’t forget that the game, and the crowd associated with it, will be some 40 miles away. Therefore, I’m thinking the only “sniffs” these boxes will detect will be those of wino urine and pot smoke (those of you who’ve visited San Francisco will understand). And that’s if the boxes are still plugged in on the day of the game. Hmm…a pair of bolt cutters for the cables and officials may find a couple of these diamond-plate boxes for sale in local pawn shops or in the back of a contractor’s truck being used as a toolbox.

Hey, I know.  A crook could steal two or three and use them to store all those missing badges and guns.

A final thought…do you suppose the boxes are nothing more than decoys, mere empty shells used to fool potential terrorists. Nah…those cowards wouldn’t care if the boxes were there or not. Besides, by the time the sniffers detected a harmful toxin in the area, the people around it would already be toast (notice how I used “toast” to tie in with the earlier reference to “toaster?”). However, an alert from these mini tool boxes would provide ample time to save the politicians who will probably not set foot anywhere near these things.

So, do you feel safer now?