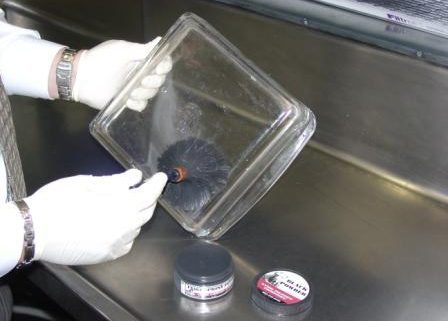 You already know about fingerprint powders, luminol, and Kevlar, right? Well, it’s time your characters added some new stuff to their crime-solving toolbox, starting with…

1. Fingerprint Ridge Builder – a chemical solution used to enhance/clarify fingerprint ridges of people with poor ridge structure, such as the elderly and people who work with their hands—bricklayers and other masons, farmers, concrete workers, etc. $19.95 per 8 0z. pump bottle

2. Blood Lifting Strips – fingerprint lifting strips that allow investigators to easily lift and preserve bloody impressions from nearly every surface, such as clothing, brick, concrete, etc. Strips appear similar to large baby-wipes and can be cut to size as needed. $44.50 per pack of 8×8 strips

6. Anti-Static Evidence Bags – used to contain and protect evidence—hard drives and other computer components—-that are sensitive to static electricity. $11.70 per 100 bags

We Were Hard Workers
Scroll to top