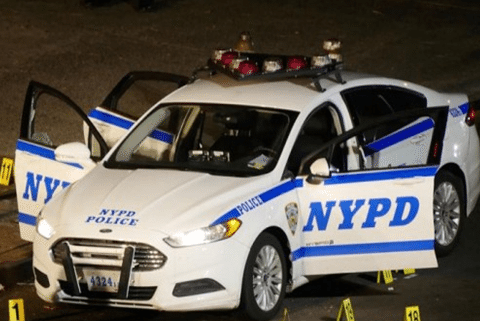 The NYPD uses a tactic called “Broken Windows,” the aggressive cracking down on minor offenses which, in turn, creates a ripple effect that reduces the number of major crimes such as murder, robbery, and rape.

Since the tactic was utilized the city has seen a huge decrease in its crime rate. For example, according to the New York Times, homicides are down by 82%. The number of rapes dropped 77%. Robberies are down 84%.

New York’s prison population has also decreased accordingly…by 28%, meaning that more people were released than were entering the system.

So the Broken Windows policy works, and it works well. As a result, NYC is the safest large city in the U.S.

So what’s the problem? Well, let’s again visit the New York Times (post the murders and violent attacks on police officers), a paper that only five short months ago published the initial Broken Windows article that basically touted its successes.

According to a NY Times article published one month apart from the one mentioned above, in spite of the enormous payoff many are adamant that Broken Windows unfairly targets people of color, and they’ve called for an end to it. Communities United For Police Reform director Joo-Hyun Kang was quoted saying, “The continuation of broken-windows policing will only deepen the divide between police and community.” This statement comes after the report that NYC is the safest city in the country.

I’m sorry that race and emotions have to enter the picture, but when crimes occur more often in some areas than it does in others, well, that’s where the cops are forced to focus their attentions. That’s how it works. Think rationally for a minute, please. Violent crime (hypothetically) occurs in one neighborhood every single night of the year, but you want police to stop going there and instead patrol over on the next block, where the crime rate stands at practically zero?

Suppose your job is to troubleshoot problematic ice cream freezers. So you drive to a nearby grocery store whose manager has complained about all sorts of trouble that’s wreaking havoc on all flavors in the box. It’s no secret that every brand and tasty treat is suffering because of those problems.

So you enter the store, totally aware that the frozen desserts are located on aisle 14, but you avoid 14 by repeatedly walking up and down aisle 9—birthday cards and scented candles—knowing full well you’ll never see a single spoonful of Rocky Road. It’s a fact that the troubles within the freezer will never be addressed by avoiding them. Not ever. Nor will they mend on their own. In fact, things will only grow worse without intervention. The same is true in areas where the majority of crimes take place.

Law enforcement cannot be proactive by avoiding areas where crimes frequently occur. Even reaction times can be slowed to a crawl when officers are forced to remain on the outside of known crime areas. After all, you can’t catch fish if you’re fishing in the middle of a parking lot.

Anyway, back to the New York Times…

This headline falsely insinuates that officers are refusing to work and that’s not the case at all. Instead, they are erring on the side of caution by not placing themselves in situations where they could be attacked and/or killed. And their concern and fears are just, considering the recent murders, violent assaults, and ambush attempts of police officers across the country. NYC officers are simply not setting themselves up as targets by making arrests for minor offenses—basically, the very crimes that fall under the Broken Windows tactic/policy.

Dangerous and deplorable are the reporter’s words to describe the lack of enforcement of petty and minor crimes.

The ill-informed author of the NYT article concludes with a demand for officers to “Do your jobs.”

But…when the police did their jobs the NY Times practically condemned and blasted them for doing it, even when the numbers showed a safer New York City. Now they’re angry because officers not doing what you wanted them to stop doing?

So which is it, New York Times? Should cops enforce the law, or not. Should they stay out of certain neighborhoods, or patrol them? Which do you want? A safe city, or a city where criminals, by intimidation, get to pick and choose which laws the cops are allowed to enforce?