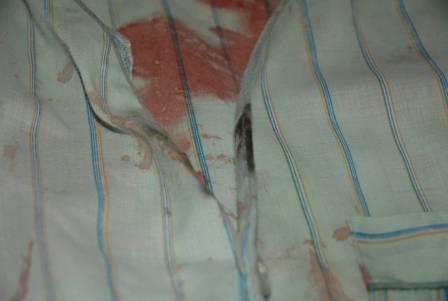 Shots fired from close range leave tell-tale marks called stippling, or tattooing. These marks are discolorations of the skin caused by burning gunpowder.

Evidence of contact with hot gunpowder can be seen just above the “V” opening of the shirt (the blackened area) in the photograph above. The person who wore this shirt was the victim of a shooting at close range—less than a foot away—with a 9mm pistol. Notice there’s no hole in the back of the shirt. No hole, no exit wound. The bullet stayed in the body even from a shot at this short distance.

The next photograph (post autopsy) is of the wound the victim received in the upper image.

The wound in the image below is round and neat, and it’s approximately the diameter of an ink pen. It’s not like the wounds seen on television where half of the victim’s body is blown into oblivion, or beyond, by a couple of bullets from a bad guy’s gun. Sometimes exit wounds are nearly as small as the entrance wound.

The amount of damage and path of travel depends on the type ammunition used and what the bullet struck as it makes it way through the body. I’ve seen officers who easily mistook exit wounds for entrance wounds, at first glance. A closer examination reveals stark differences. Exit wounds normally present pieces of avulsed flesh angled slightly away from the wound. And, usually, there’s little or no trace of gunshot residue around the outside of the wound. 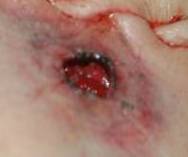 (Above) The hot bullet entered the flesh leaving a gray-black ring around the wound. The impact of the bullet, gunshot residue, and hot gases striking the tissue left behind a distinct bruising (ecchymosis) around the wound, as well as stippling/tattooing. The zig-zag pattern above the wound is the post-autopsy stitching of the Y-incision. 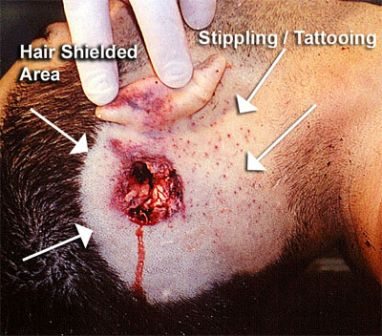 (Above) Stippling is clearly visible below the wound. Above the wound, hair prevented the hot gunshot residue from contacting the flesh. 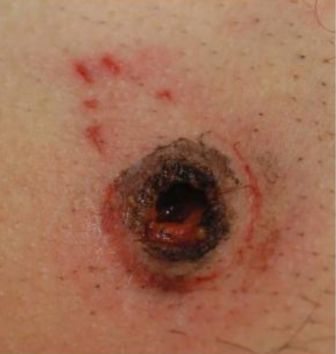 (Above) Contact wounds/muzzle imprint may be present when the the barrel of a gun was in direct contact with the skin at the time the weapon was discharged.

Wounds sometimes show an abrasion ring (a dark circle around the wound) that’s caused as the hot gases from the weapon contacts and enters the flesh. The force of the gas blows the skin and tissue back against the gun’s muzzle, leaving the circular imprint. Other markings from the weapon are sometimes visible as well, such as the checkered pattern and barrel shape below.