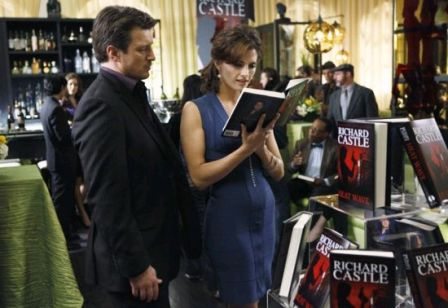 When the screen went dark and the credits began to roll on episode five, When The Bough Breaks, I wanted to dance. I wanted to kiss babies, pet a puppy, and plant a tree. I even had the wild urge to climb on my rooftop and shout to the world. I wanted everyone to know that the show was, as far as police procedure and forensics go, pretty darn good! Actually, the entire show was fun in it’s own silly little way.

Writer/producer Rene’ Echevarria’ single-handedly pulled off what I thought was lost cause. He found the missing magic, the mojo, the secret formula that made this show so appealing in the beginning. And best of all, there were no stupid, goofy, ridiculous, hard to believe, ramblings from unbelievable characters.

After watching this episode, the root of the show’s past problems became glaringly obvious. First, we’ve seen a different medical examiner, M.E. Perlmutter played by Ayre Gross (although in his last appearance he was a coroner), in two episodes.

Both of those shows were really good. His character is so, so believable. He’d even make Tamala Jones’s foolish ramblings seem plausible.

Second, the Castle writers have been trying too hard to add unnecessary, way cool elements of CSI, but it hasn’t worked. Not at all. In past episodes the CSI bells and whistles have seemed awkward, and forced. They stand out from the rest of the show like throbbing sore thumbs. And that’s what this blog is all about, educating writers so they won’t make those same mistake in their books. There’s nothing worse than reading an out of place phrase that takes the reader out of the story. Thankfully, Rene’ Echevarrio’ put a great big band aid on a chronically aching thumb. This episode flowed nicely.

Now, on with the police stuff. 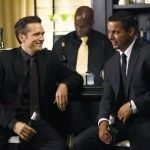 – Beckett arrived at the scene of a homicide, got out of her car, and left her lights flashing. That’s totally unnecessary when you’re not in traffic, or in an emergency situation. BUT…nearly all cops do that. It’s habit. Almost all crime scenes look like disco dance floors because of all the winking, blinking, flashing, and flickering red and blue lights. Besides, it looks cool. Good scene.

– The new M.E. was totally believable. I could work with this guy. Even his morgue scene was realistic. He’s a natural. Watch out Quincy!

– Beckett and crew chase a suspect through a restaurant kitchen. One of Beckett’s partners, in a wrestling ring-type move, takes him down. By the way, not every police takedown is a by-the-book technique. Things don’t always happen to allow that sort of thing. I’ve seen many weird take-downs, like the one we saw on this show, or worse. This was a good scene. Anyway, Beckett slaps on a cuff and immediately tells the guy he’s under arrest. What for? It’s not against the law to run from the police. Now, he is suspect in a murder, so they could legally cuff him for their safety (and they should), especially since he did run, but technically he didn’t break any laws.

– Beckett and Castle enter an interview room. Becketts says, “You’ve been advised of your rights…” Suspects should always be advised of Miranda each time a new officer takes over the interview. Even if the interviewing officers take a lengthy break (overnight), they should repeat the process before re-starting the interview. Beckett’s interview of the victim’s husband was good.

– The composite drawing looked like a portrait drawn during a sitting. I’ve never seen one look this good. Robin Burcell? Thoughts?

– I still want to hear if NYPD cops use the term “vic” as much as these guys do. Remember, this is not used universally among police officers. In most areas, cops say victim, not vic.

– Beckett’s interview of the doctor (the murderer) was good. Although, I was a bit disappointed that she fell for his story. Her character is much too tough for that.

I’m sure we could all appreciate the irony in Castle’s agent complaining that he wouldn’t return her calls. Yeah, right. Somehow I think the shoe was on the wrong foot. You guys have that problem, right? Agents call you every day, right? 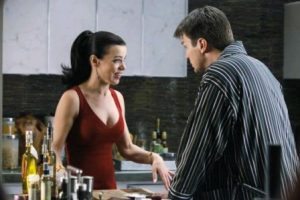 The chemistry between Castle and Beckett was fantastic, and the show had a real ending this week. Great job Mr. Echerarrio’ 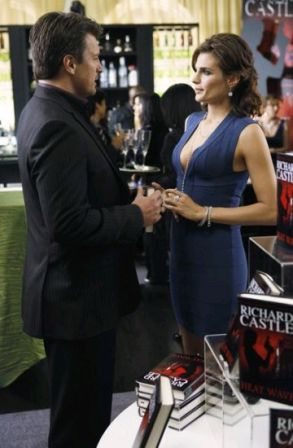