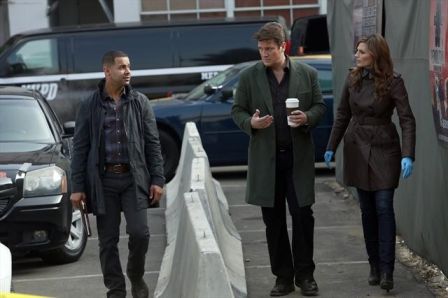 Last night was all about Esposito, a detective who wore many hats during the course of a murder investigation. And I have to tip my own hat to the writers for showcasing that aspect of police work. Yes, there is far more to being a real-life cop than writing traffic tickets and solving murders. Law enforcement professionals also serve as counselors, peacemakers, role models, coaches, stand-in parents, friends, etc. And Esposito certainly did what it took to fulfill each of those roles when a kid nicknamed “Monster” needed his guidance. That, my friends, is the side of police officers the public rarely sees.

Anyway, before I pick apart the police procedure, let’s see what Melanie thought of this episode.

This episode centered around  the murder of a popular party DJ, and Esposito took center stage. After seeing the previews and the sneak peeks online late last week, I wondered if we’d get any interesting Caskett moments in this one… and we did not, except for at the very beginning.

The show opened with Rick teasing Kate about the movie she had apparently chosen for them to watch the night before. A cute, fun moment, but certainly nothing that affected the relationship. The two of them did work the case, with Ryan and Esposito’s help, but they weren’t the main focus for a change. Enter Esposito and his attempt to help a troubled teenaged hoodlum.

I did enjoy the show, albeit not as much as when we’re treated to dozens of little Caskett gems. I thought Lanie was right on target, and that Espo did a great job with the kid. Nice.

Still, I look forward to more Kate-Rick moments next week.

As always, the episode opened with a murder. This one, the homicide of a female DJ (DJ Beat). Lanie, of course, is called to the scene, and when Beckett and Castle show up she fills them in on what she’s learned since her arrival.

Lanie – “The cause of death is most likely a GSW (gunshot wound), and near as I can tell she was shot at close range. The lack of seepage and blood spatter indicate she was killed elsewhere and dumped here.”

Lanie is still on course. She has stopped (and I’m crossing my fingers that this continues) her wacky forensic predictions about things she couldn’t possibly know until autopsy.

You know, I’m really liking the new Lanie. Sure, there are still a few things that pop up up here and there. Like when she told Beckett about her discovery of the MSG-laden peanut oil on the tarp. To say that the oil indicated the victim was killed near a Chinese restaurant was totally ridiculous.

First of all, she wouldn’t have been the person to make that discovery and analysis. Second…the analysis was completed far too quickly. Next, well, it was just plain dumb. Why couldn’t the discovery also point to the murder taking place at a peanut oil factory? Or at the private residence of a peanut oil aficionado?

But I get it. The writers needed a quick way to get that information inserted into the story. What I did like about this was that Lanie pulled it off. She’s much more believable these days. I wonder what brought on the abrupt change? Hmm…

– Beckett is questioning a juvenile (sure, officers may question juveniles if department policy permits) when he says he needs his guardian’s permission to answer questions. That situation is the same as when an adult requests an attorney. Questioning should cease at that point.

The kid was absolutely right when he said, “Maybe you’re allowed to talk to me, but I don’t have to talk to you.”

– Beckett states that many criminals use juveniles to do their dirty work. This is true, and they do so because they know juveniles receive very little time in detention, if any, for committing certain offenses.

– Someone said CSU discovered fibers at the crime scene, and they’d linked those fibers to a specific vehicle. Yes, this is possible. Although, fibers/carpet of this nature are usually found in various models within a certain auto manufacturer’s lineup of vehicles. Still, it is possible to narrow the search using carpet and rug fibers.

– Finally, Beckett and crew stopped saying “APB—all points bulletin,” and switched to BOLO (Be On The Lookout). I haven’t heard APB in many, many years. BOLO is the more common term used by today’s officers. “They issued a BOLO for a 2012 Lincoln MKZ.”

Again, I really liked the role played by Esposito this week. He was quite believable. The scene in the bar where he took out the biggest and baddest guy to get to the “boss…” well, if you haven’t already done so, please take a moment to read the brief anecdotal section called “Mountain Man” in my book on police procedure (page 107). I think you’ll understand Esposito’s mindset a little better after reading.

Esposito’s time with the kid… As they say, been there, done that. And so have most police officers at some point in their career.

Overall, this was a nice episode that showed the depth of the Castle actor/acting pool.

Followon TwitterSubscribeto RSS Feed
A Hike In The Olympic Mountains: Heaven On Earth

Murder In Paradise: No Limits To The Imagination
Scroll to top