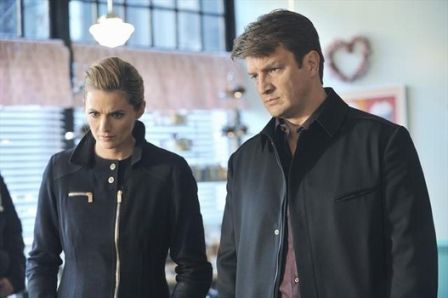 Okay, who knew that straight-as-an-arrow Ryan had an edgy dark side? I, for one, was pleasantly surprised to see Seamus Dever take on the persona of the undercover cop as an Irish mob thug, and boy did he deliver a very nice performance. It was also nice to see Dever showcased instead of doing the instant “pop-in” thing whenever a bit of information is needed to move the story from one point to another.

Before I spill my entire review in this opening segment, though, let’s move along to Melanie’s take of the show. I know she had to be squealing like a hungry pig when Beckett and Castle finally locked lips near the end of the episode. I wonder if she’s back from her trip to Cloud 9? Melanie, would you please stop swooning long enough to share your thoughts on last night’s episode…

Wow. I wasn’t sure if I’d like this episode or not, since it focused more on Ryan and less on Castle and Beckett, but I was pleasantly surprised. What a great episode! The writing was tight, the scenes moved quickly, and the show had enough humor and Caskett moments sprinkled in to keep me on my toes.

The episode started with Kate confronting Rick about saying the name “Jordan” over and over in his sleep. Was Jordan a woman? Someone he just met? Or maybe someone from his past? She kept bugging him about it throughout the entire episode, and nearly every time they made me laugh.

Ryan and Jenny are trying to have a baby, of course, and they go to have tests made to see why they hadn’t been able to conceive. Ryan leaves his lunch at home afterward, and Jenny brings it to him at the precinct — just in time to see some strange woman lay a kiss on him and call him “Fenton”. Can you say awkward?

The woman turned out to be someone from Ryan’s past when he was undercover with the Irish mob, and he hasn’t said a word to Jenny about it. The woman is tied to the murder of Jimmy the Baker, as are some guys Ryan ran with when he was undercover as Fenton O’Connell. He goes back under to catch them, and Jenny is not happy. I loved the undercover part of this show. The undercover scenes were suspenseful and scary, with enough twists to keep me riveted to the screen.

Kate finally talked Jenny down, and Ryan escaped with his life with the help of the team. The scene where they rescued him rocked, and Nathan was so funny. I cracked up when Ryan called Castle’s name, and he backed around the corner and shouted, “Seriously? I-I forgot my vest.” Too funny.

Once things settled down and everyone was safe again, Rick finally came clean to Kate about the name “Jordan”, the name of a defunct car company he wrote a paper about in boarding school — or rather, the company he paid someone to write about. That incident helped shape who he was, and he’s felt like a fraud ever since. IMHO, I believe Kate was thrilled he told her the truth and gave her more info about his past, especially after the seed of doubt Meredith, his ex-wife, planted in her head during her visit in the episode Significant Others back in January. Good for him! And that kiss… finally, we got one with a little passion! Whoa. I just watched it again. Can’t stop watching it, actually.

The last scene was between Ryan and Jenny… with him apologizing for going undercover and her telling him she needs him to be there for her. The reason? She’s pregnant! All of their worry about not conceiving was for nothing. How exciting! I can’t wait until the rest of the team finds out.

All in all, this was a solid, fun episode. Still, I can’t wait for the one next week, Castle’s 100th episode, written by the show’s creator, Andrew Marlowe, and his wife Terri Edda Miller. They write the best episodes ever. I predict they’ll treat us to classic Castle, and I cannot WAIT! It has a plot similar to Hitchcock’s Rear Window, with Rick stuck at home after tearing up his knee in a skiing accident when he and Kate go away for a weekend. Should be a blast!

Pardon me, while I take a moment to see if I can locate the problem with my computer. I know something has to be wrong, because no matter which keys I hit, the dang machine always types, “Lanie was great last night!” And we all know those words couldn’t coming from me, right?

Think about it. For years, I practically begged the folks writing the show to please give Lanie lines that were believable (remember, believable make-believe is the key to great fiction), but they stood their ground, making the woman spout off nonsensical forensic goop. However, this season has been a complete turnaround. For example, last night Lanie simply told Beckett that CSU would be running the tests on fibers discovered at the crime scene. Great comment. Perfect, actually.

In the past, the writers would’ve had Lanie saying something like, “I personally found these fibers clinging to the victim’s watchband. My preliminary finding is that the right-handed perpetrator stood on one foot and had his left eye closed while shooting our vic in the back with a Star Trek Phaser. As the money-laundering mob hitman pulled the trigger, the vic reached behind and managed to pull nineteen fibers from the shooter’s jacket, a garment made from pure Tibetan Yak hides. Now, those animals always stand on hillsides with slopes of precisely 45 degrees or more, therefore I conclude that our vic died between 11:00 p.m. and 11:07 p.m. Oh, yeah, the shooter’s name is George.”

Again, Lanie did a fine job last night. I kept waiting for the goofy-bomb to drop, but it never did.

– Beckett told the guys to run all ’68 Dodge Cargers through the system to see who in the immediate area owned one. Yes, that is possible, folks. Especially, when it’s a vehicle that’s not commonplace, such as the ’68 Charger. However, if officers attempted to run, say, all the 2010 Honda Civic’s, well, the list would go on forever.

– Sioban’s statement, “I want my phone call, now!” sounded all fine and dandy, but that “one phone call” is not one of our constitutional rights. So, you’ll get to make it when it’s convenient for the officers. And that might mean later in the day, or night, once you’ve been sweetly tucked into your cozy jail cell. At that time, an officer might roll a stand-up portable telephone to your cell, where you can reach through the slot in the steel door to punch in your number. Oh, the call would be a collect call made at a crazy-high rate that’s charged to your family.

– Ryan…where do I start? Well, I could begin by saying I liked his metamorphosis from cop to thug. Anyone who’s ever worked undercover will tell you that it’s a bit like an actor playing a role. However, the role must be so convincing that you’ll walk away at the end of the day, instead of someone discovering your lifeless body floating in the Hudson. 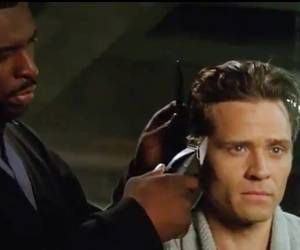 I think Ryan pulled it off nicely, starting with the haircut. And, actually, I thought he looked better than ever with the new “do.”

Ryan also played it nicely when he was around Siobahn. You could see it in his eyes that, at some point, he actually did care for her. And this is the reason why “handlers” absolutely must pay close attention to the officers who’re working deep cover. It’s so easy to fall into the lifestyle and to develop feelings—romantic or platonic friendships—for the very people they’re there to take down. Believe me, it happens. (Handlers are the officers assigned as contact/supervisor for the UC officers)

– Okay, as usual, my wife and I both named the killer very early in the episode, and we did so by following our simple formula…it’s someone who has a very brief role, but stands out just enough in their short time on camera. Still, the writers concealed this one much better than usual.

Well, that’s about it for the police procedure. But I do want to mention the “cheesy factor” going through the roof over Castle’s admission of wanting to write, and write, and write to prove that he was a great writer to…a bunch of kids he went to high school with… That was the corniest thing I think they’ve done on this show so far.

Overall, this was another good episode. The acting, of course, was good. Stellar acting, though, from Semus Dever. By the way, did you know that Semus Dever is a first cousin to a popular mystery writer? In fact, many of you know the cousin. Okay, I see the wheels turning, but I’m sworn to secrecy. But no one said I couldn’t tease.

By the way, every time someone said the name Siobahn last night, all I could picture was the powerhouse singer Siobahn Magnus who once was a contestant on American Idol. Remember her?