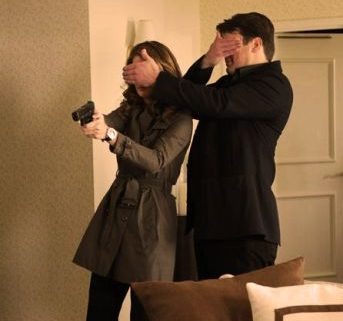 Once again (as if I had any doubt), this show opened and headed straight for the land of all-too-familiar. The same-old same-old. The tired and old story we see week in and week out.

We get it, Marlowe. You’re milking your fans for every last drop of “I wanna watch” juice. The problem is, even the characters are beginning to look tired. Yes, even Castle seems to have lost some energy. I mean, how many times does it take to repeat the same thing over and over again before everyone loses interest?

My opinion of this episode is far less than favorable. Even the guest star annoyed me with that horrible mangled accent. In fact, I could only understand something like every third mumbled line. Anyway, let’s see what always-happy-about-the-show Melanie has to say. Maybe she found a bright spot somewhere is this mess.

Welcome to the big black moment. Yes, that’s right. We’ve reached the darkest days for our two wanna-be lovebirds. The moment in any good romance when all is lost and the reader — or in this case, the viewer — decides the couple in question will never get together. Yet we shouldn’t lose hope. You know the saying: It’s always darkest before the dawn.

When The Limey begins, Kate is still reeling from Rick’s cold shoulder — the change of heart that resulted from her inadvertently revealing she remembers everything about her shooting, including his desperate I love you — and yet she has no idea he knows that she knows (does that make sense?). Or maybe she just doesn’t want to know.

Lanie finally talked some sense into Kate during a girl’s night in and convinced her to tell Rick how she feels. I really loved one of her lines: “How long can you circle before the fuel runs out?” Perfection. Still, even that sage advice did absolutely no good at all, because Rick picked up right where he left off last week — only this time, he showed up with a shapely blonde flight attendant in tow. A blonde he allowed to drive his red Ferrari. They went on date after date, and that hurt Kate. To top it off, she and Rick are out of sync at the precinct, too… no fun theory building or playful eye sex this week. Just pained looks and hurt expressions. 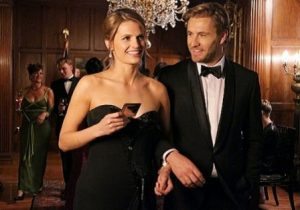 Kate even went undercover with the handsome, sexy Colin Hunt from Scotland Yard, turning Rick’s head when she appeared wearing a gorgeous black strapless dress, yet that still wasn’t enough to keep his attention. He’s hurting, and he’s showing out. To say he’s acting like a passive-aggressive middle schooler is putting it mildly. Come on, Rick. Grow up!

He’s not the only one at fault, however. Kate had the perfect opportunity at the end of the show to tell Rick how she really feels, but does she? Of course not. She clams up again and lets him walk away. Aarrgghh!

This is getting very, very old — and in the next episode, three weeks from now, Rick abandons Kate to work with Detective Ethan Slaughter. I do believe, though, that we have indeed reached the big black moment in their relationship. Stana Katic herself has said that happiness is just around the corner for our dynamic duo, and that Caskett shippers will be smiling by the end of the season. I certainly hope so. Because right now, I’m drowning in angst! 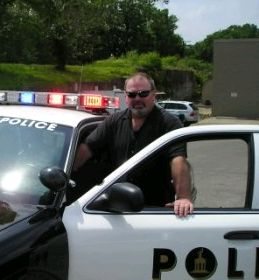 The case this week was a disaster. Seriously, think about it…a woman’s boyfriend, the only man she ever loved, was flying around in a helicopter that was shot down by a smuggled missile. So, like any normal girlfriend in the good old U.S. of A., she decides to take it upon herself to find the missile smugglers. Now that’s always an easy task, right? You know…work eight hours, eat dinner, do a little laundry, watch a little TV, and, oh, yeah, run out and catch me a couple of international smugglers who’re selling stinger missiles by the dozens. Doesn’t everyone do that sort of thing? Puleeze…

Lanie was the only bright spot in this episode. Yeah, you heard me right. That’s how bad it was for me. Yep, I was actually hoping to see and hear more of Lanie. Of course, she didn’t disappoint, starting with her comment, “She was strangled, but she didn’t go down without a fight.” How did she know the woman fought back? According to Lanie, the bruise near the eye was an indication that she’d defended herself. What’d she do, hit her attacker with her face? Now, that’s going down fighting, for sure.

And the fingerprint thing… So now Lanie is not only NYC’s chief medical examiner, firearms expert, toxicologist, and trace evidence expert, she’s also a certified fingerprint examiner. Just so you know, M.E.’s do not compare and match fingerprints.

– Beckett and crew heads to bad accent guy’s hotel room where a hotel employee uses his key to let them inside. Well, they’d need a warrant to make that entry. Hotel employees cannot allow access to someone’s room. When you stay at a hotel you’ve rented that place for the night. You’re basically a tenant, and landlords cannot give permission for a search of their renter’s property. On the other hand, if the police had a warrant the employee could open the door to prevent damage, and to make the entry safer for the police (he could also give them the key, if they have the warrant).

– Beckett steals the bad guy’s card case from his pocket while they’re dancing. And that’s exactly what she did, she stole it. Not legal. However, had he tossed the item in the trash, well, then it’s fair game.

– Castle’s family was missing from this episode. Good or bad? Actually, I was pleased that we weren’t subjected to Alexis’ morgue nonsense. And to miss Mama Castle’s out of place actor-type scenes was also quite pleasing. However, I like the mother and daughter/granddaughter in the show when they’re adding something useful to help the story along.

There really isn’t a lot to discuss about the criminal case, because it was weak…really weak. As usual, suspect number one was a wash. And, the choice of using the “cop-as-a-suspect” recurring theme is also getting really old. Hey Marlowe, it’s okay to use a new idea once in a while. I promise we won’t mind.

I have a great idea! Since this show used to be about a mystery writer, why don’t we invite Mr. Marlowe and the entire cast to the Writers’ Police Academy for a chat session with some of the the top mystery writers in the country? Then the Castle folks could get an idea of what it’s like to write mysteries, learn about real cops, real procedures, and forensics, and maybe even get a few new ideas. What do you think?

Oh, one last thought. The Biggie Slim guy…another disappointing killer. Please come to the WPA, guys. We can help. Really, we can. 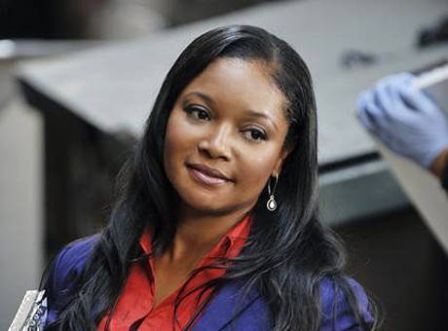 There were a couple of note-worthy lines in this episode:

“How long can you circle before the fuel runs out?” ~Lanie

*Remember, folks, I write the sections about the police stuff at the requests of writers who want to know if the procedure used on this show is realistic. Yes, I do realize the show is fiction and I do realize this isn’t a cop show. But please do keep those hate-mail cards and letters coming. It’s so nice to hear from you.