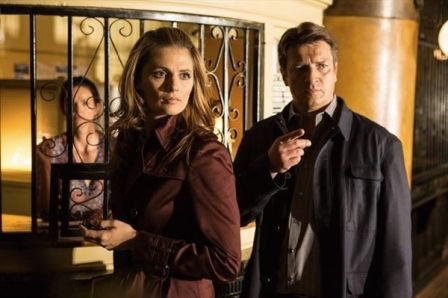 Last night’s episode was, well, bizarre. And not in a good way.

The shaky-cam filming style combined with the characters over-acting and hamming it up for the cameras was downright horrible. This was definitely the worst episode of Castle to date. In fact, had this been the first episode I’d seen I would never tune in again. Of course, there were a few funny moments. Unfortunately, the bad outweighed the good this week.

But that’s my opinion. Let’s see what Melanie has to say about what we saw last night.

Tonight’s episode, about the death of a legendary rock and roll singer, was told documentary style like The Office and Community—a first for Castle. Nathan and Stana said in interviews that looking into the camera was hard to do, because as actors, they usually spend so much time trying not to look at it. Their characters had other ideas, of course. Rick preened for the camera, while Kate did her best to avoid it. Ryan didn’t seem too thrilled about the attention either, but like Rick, Lanie craved the spotlight… as did Esposito, who turned out to be the biggest ham of all—and pretty good singer. I thought the episode would be funnier than it was, but I did enjoy parts of it.

I wanted more romance, of course. They gave us a few tidbits, such as Rick telling one of the cameramen when talking about Kate, “I just want you to see what I see,” meaning strong, independent, capable Detective Beckett. Or at least that’s what I got out of that line. And later, when Rick and Kate were talking privately and he hooked a lock of hair behind her ear, she smiled, leaned into his touch, and put her hand over his… before noticing the camera and jerking away. Uncomfortable, much?

Then near the end of the show, Captain Gates told the whole precinct she would review the entire tape for its appropriateness… and that sent Kate into a tailspin. She was afraid Gates would see the aforementioned scene between her and Rick—an understandable fear considering she believes her boss wouldn’t approve of their relationship, especially a PDA in the precinct.

Didn’t turn out that way, since she and Rick cornered the filmmaker and convinced him to “lose” that piece of tape, but it was a close call.

Otherwise, this was just a weird episode. I laughed in spots and enjoyed Esposito’s singing and hamming it up, but don’t really enjoy the documentary style as a rule so this one didn’t really grab me. The case bored me, and I simply could not fathom why in the world Lanie would check for antibodies for polio, measles, etc, in the victim’s blood. Too odd, even for TV. I mean, please!

I can understand the producers wanting to try something new with this documentary style, and I don’t fault them for it. I’ll just be glad to get back to regular Castle episodes. Next week’s show involves a murdered priest, and the promo for it had ominous overtones. Very scary. Then comes the Christmas show, titled Secret Santa — their first holiday show ever. I can’t wait for that one. A very Castle Christmas. Teehee!

As I said above, there wasn’t much to like about this episode. And, of course, Lanie did the show no favors. However, I have to come to the actor’s defense this week, because the writers truly stuck her with horrible material. I know, that’s the trouble each and every week, but this time was far worse than before. She’s an information dump for writers who are too lazy to write necessary information into the script. A fiction writer (books) would most likely be rejected by agents and editors if he/she tried this move. Believable make-believe, it’s not.

So let’s started, and there’s no better place than…

– The film crew was standing in the middle of a bloody crime scene, contaminating and destroying the evidence. Wouldn’t happen, not in a million years, no matter how many “official letters” they possessed.

– Lanie and her use of lividity to determine the time of death. Well, here’s some information about lividity, and what it is. After reading, you be the judge. Ask yourself, could Lanie pinpoint the time of death within two hours, long after lividity is fixed?

The staining of tissue normally begins within the first two hours after death. The process reaches it’s full peak in eight to twelve hours. Once lividity becomes fixed it is basically no longer useful for determining a time of death, other than to say the death most likely occurred “over twelve hours ago.” Lividity alone cannot be used to pinpoint an exact time of death.

– Esposito, speaking about a murder suspect, stated that a preliminary test indicated that the blood found on his clothes was indeed his and not the blood of the murder victim. Well, there is no preliminary blood test (presumptive test) to determine the origin of blood. There are tests, however, to determine whether or not blood is human (Sirchie Fingerprint Laboratories offers such testing material).

– Lanie, and how she stated this while maintaining a poker face is beyond me, said the victim had no polio vaccine antibodies in his system. And, she went on to say that there were no other immunization vaccines present in his system. This, to say the least, was RIDICULOUS! There’s no way she’d have tested for any of those things. Why would she, unless maybe the victim presented with signs and symptoms of polio. This was the absolute wackiest thing Lanie has said over the years. Again, the writers used her to get this information before the viewers, and that’s lazy writing on their part.

The show wasn’t all negative. When Esposito heard gunshots and screaming coming from inside a locked apartment, he kicked in the door. Police officers may enter without a warrant if they truly believe someone’s life is in jeopardy (exigent circumstances). The same is true if they honestly believe that evidence in a crime would be lost or destroyed if they didn’t act immediately to seize it.

– It was a pleasant surprise to see C. Thomas Howell make an appearance last night as the cult leader. For those of you who don’t know, Howell plays the part of Dewey on Southland, the most realistic police show on TV (TNT).

– One final thing that bugged me…the roadie supposedly taught Swan (the murder victim) how to play guitar. In fact, Swan had stated that the roadie (sorry, I don’t remember his name) was a far better guitarist than he could ever be. So, when it was discovered that the bass player was the killer, the band replaced him with the roadie. It’s not likely that a dynamite lead guitar player would ever replace a bass guitar player. They’re two different instruments that are each played differently. Sure, it’s possible, just not likely. That would be sort of like Team USA replacing a shot putter with a swimmer. They’re both on the same Olympic team, so why not?

What do you guys think? Was it a bad episode that’s far beneath what this show is capable of producing? Or, did you love it in spite of the obvious flaws?

Are You Writing What You THINK You Know?
Scroll to top