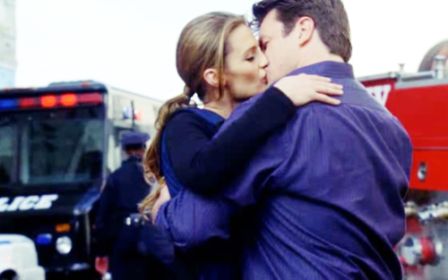 Well, this is one time when it truly is a good thing to have two reviewers—the good and bad cop. Why is this a good thing? Because Melanie absolutely loved this episode, and I absolutely hated it. And, as far as I’m concerned, hated is not a strong enough term to describe my feelings about what I thought was a real snooze fest. A total yawner. But, I’m pretty sure I know why and how Melanie and I came to be at opposite ends of the spectrum on this one, with no common ground or element to share.

Melanie watches Castle for the romance and relationship. I watch for the comedy and the police procedure and forensics (or the lack of). This episode was all about the relationship, the love, and the goo-gooey-eyed moments that occurred over the history of the show. And we saw those moments via flashbacks. By the way, the flashbacks made this episode doubly painful for me because I despise “back-in-time” scenes. So, an entire episode of nothing but flashbacks of mushy stuff pretty much pushed me over the edge. But I can see how Melanie and a boat load of shippers would have spent their time last night squealing and drooling throughout the show.

Since there was no real police procedure (goodness knows what little we did see was goofy), I’ll first call on Melanie to share her giddiness with you. Melanie, have you returned to earth, or are you still floating among the clouds after seeing all the mushy stuff last night?

I loved this episode. Absolutely LOVED it — even though I had to keep in mind that this episode should have aired before last week’s show. Consider that in terms of relationship continuity. Even so, after nearly a year of being together, Kate finally told Rick she loves him. Yes, she might have said the words under duress, under the threat of death, but Stana’s tears and the agony on her face told the tale. I was in tears, too. What about you?

The first scene with Rick bringing Kate breakfast in bed — he even made hearts in their coffee — and then her sitting on his lap set the tone for this one and told us the episode would focus on their relationship. Yes, Kate stepped on a bomb inside the suspect’s apartment and had to remain “still” to keep from setting it off, but the episode did revolve around her and Rick. He stayed inside the apartment to keep her company even though he could have fled at the beginning to save himself. He used humor to keep her distracted so she wouldn’t focus on her predicament, and it worked, at least for a while.

All of the flashbacks and fun from the pilot on brought back so many good memories and made me laugh out loud over and over again. They reminded me why I love this show so much. One day I’m going to gather all my DVDs and watch the show again from the beginning, just because I can. I love the evolution in Kate and Rick’s relationship and the way they’ve learned to trust and love one another. The way they’ve opened up, maybe not on every level even now, but so much more with each new episode. This show has hit all the right marks with me, and that says a lot because I write romance. Kudos to Andrew Marlowe and company for finally giving me the love story I’ve craved ever since I started watching television.

I adored the relationship part of this particular episode, and that of course made up most of it, but I did giggle at the Mission Impossible-like green lasers shooting up from down below to outline the edge of the bomb. Seriously, folks? I could hear Lee’s loud groan from here in Mississippi. If that’s really the way bomb disposal units do that, I’ll retract my statement… but seriously? And Rick coming up with the code at the last second… okay, I can live with that. He did save Kate after all… and the hug they shared once the bomb disengaged made me tear up all over again.

And of course, now we know Gates is aware Kate and Rick are in a relationship. Finally! Like Gates said in the show, she’s not an idiot. I knew she had to know, and I thought they handled her letting them in on it in a great way. So glad that silly story line is over, however. I thought they dragged it out way too long. Sorry, but I did. A little of that went a really long way.

Crazy green lasers and Gates aside, I thought the powers that be did a fabulous job of putting tonight’s show together so fast. Still was an extra episode ABC added after Marlowe, et al, had lined up the remainder of the episodes for the end of the season, so they had to decide what to do in a hurry. They shot the show in three days, versus eight, and then used the clips from previous seasons to fill in… giving us that delicious trip down memory lane. Yay for the wonderful editors who took on that monumental task. I thought the idea worked perfectly.

Tension, angst, drama, laughter, tears… it doesn’t get any better than this. I’m afraid the next two episodes might kill me, however, what with the… well, never mind. I don’t want to spoil too much. Stana did tweet that the finale is a tearjerker, but in a good way. Really?

Only two more episodes to go in season five.

I just have a couple of points to address this week.

First, the fully-suited entry team kicks in an apartment door. They’re ready to do battle, complete with Kevlar helmets atop their little actor heads. As they make their carefully executed entry, a pony-tailed Beckett steps into the line. I’m sure you guys are aware there’s a certain order and purpose of the entry team. Each person has an assignment and their position in the line dictates what each person is supposed to do. So Beckett jumping line is just not the proper thing to do. Besides, she wasn’t dressed appropriately for the task at hand. Not to mention how silly it is to have Castle parading around, unarmed, in a highly charged for-well-trained-cops-only situation.

And let’s not forget the crossfire situation surrounding the bomber (Fosse). Oh, and Ryan running through the alley holding his pistol in outstretched arms. If you have a moment, re-watch the scene and you’ll see his weapon waving side to side, wildly. An accidental trigger pull during that scene and who knows who’d have been the recipient of that round.

Yes, the bomb disposal unit was pretty goofy. In real life, the team commander absolutely would not have allowed Castle to remain in the room with Beckett. And, they most certainly would not allow him to wander around at will, going out for coffee, etc.

– Why on earth would Ryan and Esposito simply leave Beckett and Castle in a building where a bomb was set to go off? They warned her about it and then we saw the duo at the precinct talking to Gates. Odd.

Finally, I was a bit confused about the premise of the bomb, the bomber, and the guy the bomber was targeting. As I understood it, the bomber (Fosse) was trying to learn the identity of his kid, I think. But when Castle figured that out, he also correctly guessed that the password to deactivate the explosive was the mystery kid’s name, Billy. Well, if that were the case, then Fosse already knew the kid’s name. Somebody please clear this up for me. Not that it’s important, because it’s not. Besides, it fit perfectly into this week’s totally ridiculous case.

Well, as I said earlier, I didn’t like this episode at all. But I’m sure the true shippers are still swooning because they had the opportunity to see all the lip-locking and tear-jerking moments all in one episode. Good for the shippers, too, because this sort of thing is precisely why they love this show. And they are the target audience, not me.

There was one good aspect to this yawner…I had an extra hour to work on my current book, which, for the first time since the show first aired, is what I did while this episode slogged by.

By the way, who knew that Beckett had worn so many different hairstyles over the years? And I’d almost forgotten that Castle is a writer…