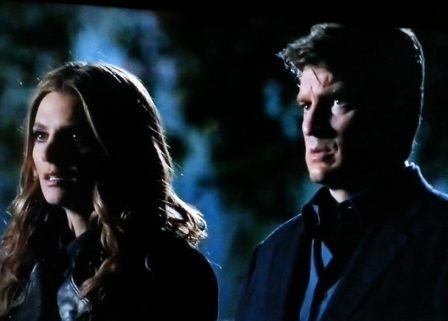 Telekinesis was the theme, and there was more to this episode than a semi-drunk amateur magician bending a couple of spoons at Grandma Gertie’s 95th birthday party. In fact, this show was filled to the brim with snazzy parlor tricks. So, without further ado, let’s drop in on Melanie to see what she pulls out of her hat.

A real life Carrie at one of Rick’s old high schools? Mean girls versus the outcasts? Yes, the scenario has been done to death in just about every procedural that’s ever aired, but this one came with a twist. I’m not sure if Rick, Kate, and crew ever decided if any of the telekinetic acts the outcast kids performed were real, but the strange occurrences added to the storyline… as did some real life accuracy. Lanie actually used the term “liver temp” when referring to estimating time of death at scene of Madison’s murder. Not sure if it was a first, but I was thrilled the writers did their homework for a change. Kudos to Dara and Chad Creasey, who are new to the show this season. 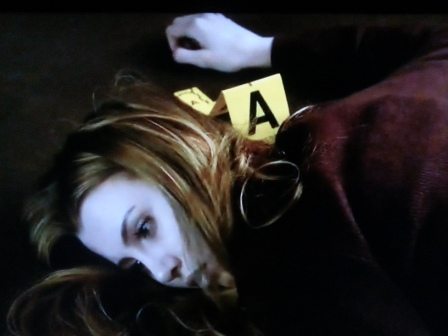 After the lead in with the requisite dead body, the scene changed to Kate and Rick at the loft sparring over whether to go with a live band or a DJ for their wedding reception while they got ready for bed. Rick figured they’d go with a band, while Kate opted for canned music. Their animated discussion soon led to the realization that they don’t have a “song” like most couples. So what will the band or DJ play for their first dance? Ack!

Kate and Rick soon got busy working the case, leaving us to fret over their wedding music, and wound up at Rick’s old high school. His trip down memory lane led to them sharing stories from that time in their lives, and we learned both of them missed their senior proms. Rick got himself expelled the week before the dance for putting a cow on top of the administration building, and Kate opted to attend a poetry slam instead as an act of defiance. Always the rebel. Knowing the pair as I do, neither scenario surprised me.

The case took several wrong turns before they finally figured out who murdered Madison, but once they did our dynamic duo returned to the school during the Starry Night dance to arrest the culprits. A nice touch. Once Kate sent the kids off to the precinct with a couple of uniformed officers, Rick asked Kate to dance. So sweet and romantic.

While they were dancing, Rick uttered one of the best lines from the series so far, IMHO. “Everything I’ve ever done, every choice I’ve ever made, every terrible and wonderful thing that’s ever happened to me… has led me right here, to this moment with you.” Cheesy, certainly… but the line is so Castle, and so perfect for them. I loved it.

Loved the song, too. Did you recognize it? It was In My Veins by Andrew Belle, the song playing at the end of Always, the season four finale, when Kate showed up dripping wet at Rick’s door and said, “I just want you.” Can’t think of a better song for them to dance to at their wedding. 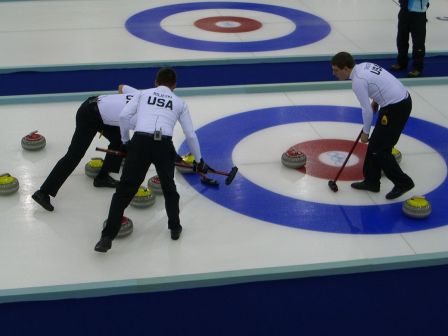 I enjoyed this episode. It wasn’t the best, but it held my attention, made me laugh, and cranked up the romance. Classic Castle. Just what I needed after a week of watching skiing, curling, and bobsledding. The Olympics are nice, but I’ve missed my regular shows.

I agree with Melanie. It’s sometime difficult to force myself to switch channels while this year’s exciting Olympic games air opposite my favorite shows. Actually, we record everything these days and watch, commercial-free, at our convenience. However, we’ve also found ourselves fast-forwarding through much of the games.

Is it just me, or have you also noticed more falls, trips, stumbles, and spills than in year’s past? Sure, it’s sort of fun, in a train-wreck-watching kind of way, to see a skater slide face-first into a wall, as long as they’re not injured. But aren’t these people supposed to be the best in the world at what they do? Aren’t these the folks who bested every single skier, skater, and snowboarder in every single competition?

Speaking of snowboarders… Have you seen the guy who wears clothing that’s at least four times the size he should be wearing? His freakin’ pants are so big the waistband hovers around his knees, and to keep them from falling to his ankles he installed some sort of strap with one end that’s attached to the pants and the other to an out of sight location somewhere on his body.

Is there no dress code for THE games? Can’t this guy stop pretending to be a gansta’ for a couple of hours so he doesn’t have to constantly tug on his pants to prevent them from becoming tangled around his feet and skateboard sans wheels?

Anyway, enough of that rant. Let’s move on to…Lanie (groan). 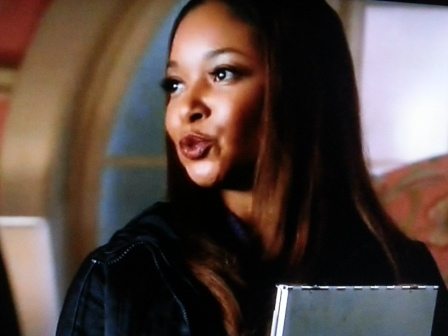 Like Melanie, I was about to do a few happy cartwheels when Lanie said she used the liver temperature to estimate the victim’s time of death (TOD). How difficult was that to do, Castle writers? Change a couple of words and suddenly your character is believable. Fantast— Wait a second. I almost forgot. Lanie told Beckett that the blood on the ceiling belonged to the victim. Well, that’s a hunk of Voodooery and crystal-ballish forensics. She’d need the folks in the lab to compare the blood on ceiling to that of the murder victim, and that can’t be done at the crime scene. For starters, she can’t even be certain the stuff on the ceiling is truly blood until it’s tested.

The murder case was a bit wacky, with a couple of unrealistic loose ends left to flap in the breeze. But it was a fun case, and to make it more enjoyable was the reference and resemblance to Stephen King’s Carrie. It was also a nice touch to have Castle do a bit of name dropping (King) and mentioning that he himself is still a writer. 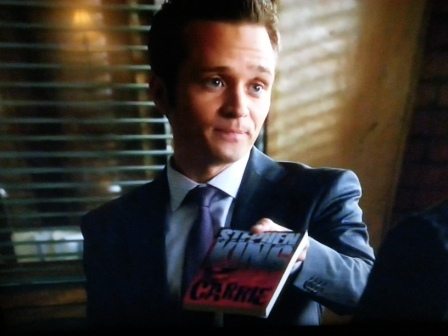 Actually, Castle probably plucked a few raw writer nerves when he said that young people no longer read paper books, opting instead for e-readers. But, it is what it is. I prefer paper books. I also enjoy using my Kindle. But a Kindle simply does not, and will never, smell like a book. Nor will it ever have the feel of an honest to goodness book. I think someone needs to invent a line of fragrances, such as “Old Book” and “New Book.” Then, when we need to reminisce about the days we spent in libraries and brick and mortar bookstores, we can give ourselves a pick-me-up by spritzing our e-readers a quick dose of “Old Book”.

Show of hands. How many people actually thought Lucas (the blue hands guy) was the killer? No? Well, me either. The writers and director sure tried to make us believe he was, though. In fact, they did everything in their power to throw us off track (I picked the blonde girl almost immediately).

Seriously, how blatantly obvious were the phoney clues—blue paint, and the “he’s guilty” look from the young lady in the background. 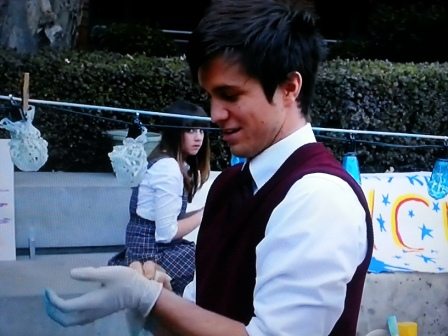 Please, writers, we know the boilerplate script forward and backward, up and down. Shake it up a bit. We like surprises. Really, we do. Even this show (below) tries to add a bit of surprise once in a while. 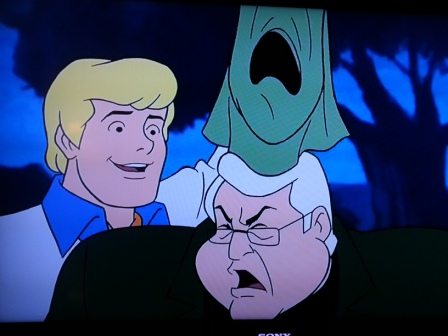 With the end of the show rapidly approaching, the writers made one last push to throw us off track. 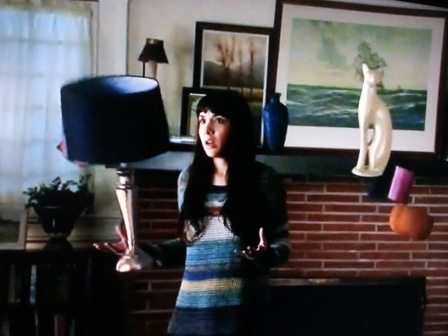 But I was on to them and stuck to my guns. I was convinced that the blonde girl was the killer (she was so not a factor in the show that I couldn’t remember her name). However, I glanced down to write something, and when I looked up I thought the Castle officials had finally stumped me. I just knew they’d revealed the murderer and that I’d been wrong all along. But, it wasn’t to be.

It was only the well-armed Musinex guy. 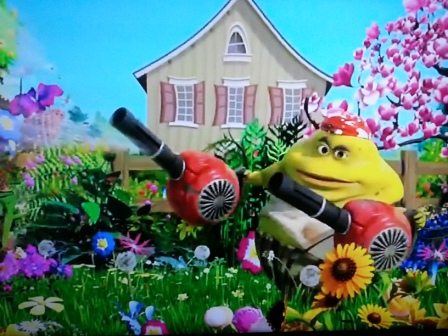 Anyway, the case was eventually wrapped up and the blonde girl and her BFF were led away in handcuffs. And, of course, everyone went to the prom, including… 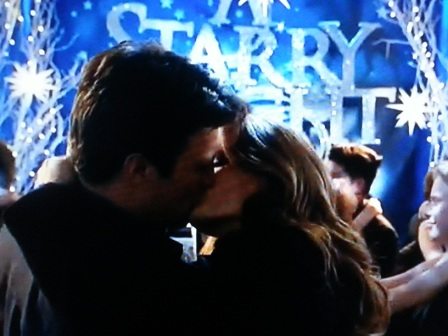 By the way, you knew early in the show they’d end up at the prom, right?

Finally, what about the doctor? Was it ever explained how he managed to float/levitate? 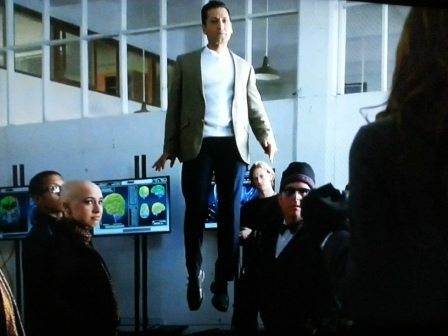 Oh, the storyline about telekinesis used by an angry young woman, well, I wonder where they got the idea? Yes, I wonder…