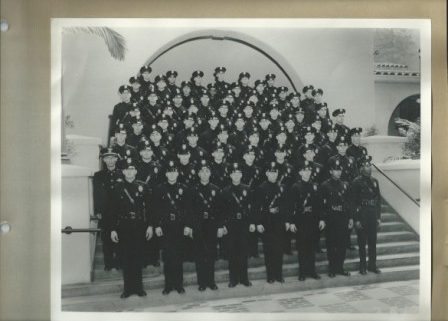 Reading through The Graveyard Shift brought back many memories for Jerry Cokely, and he was kind enough to share those thoughts with us today. Here’s what he had to say.

The LAPD And A Partner Named Wambaugh

Training has made drastic changes since my LAPD class of 1957. They put us through the rigors, too, and I suppose each generation does it somewhat differently but with the same goals in mind.

All, except one, in our class were military veterans. Frank and I took him under our wings and taught him how to march and make drastic changes from his pure civilian life. Jim Poedy was born with two left feet. At least that’s is what we thought for awhile.

The various tests during the LAPD application process were intense in various ways. They included a three hour written test followed by a physical agility test, both on the same day.

Then the physical examination days later. At that point I weighed in at 150 and 5-foot-10 (almost). The no-neck gorilla in line in front of me would not have needed a partner to work with. I believe he could have pinned on his badge without wearing a shirt. Much to my amazement he was rejected as the doctors considered him too “muscle bound” and a health risk over a 20 year period. Additional surprise came when the doctor praised me for being is such great physical shape (looks aren’t everything). The past 18 months with the Marine Corps got credit for that.

After passing those tests an oral interview was given followed by a psychiatric examination. At the oral they tested me by calling me a mamma’s boy. Knowing I was single and living back home they asked me “Did your mother tie your tie?” It was a shocking question to test my reaction. Without giving it much thought I looked the questioner square in the eye and boldly and proudly stated “No, I did it all by myself.” They accepted my reply and the three interviewers went on to other questioning.

The few of us who passed all the tests were told that we were 3% of the applicants who had initially begun.

For me it had been only 30 days. I don’t think that really impressed any of us and certainly not me. We were just anxious to get the job and to become police recruits. We were hired as” Policemen” and not as Police Officers as they are today. The ladies were Police Women (none in our class).

Life during the Police Academy was similar to USMC life and is generally considered as quasi-military as the discipline is similar. All lived at home and attended the academy during the day. The physical training included running, calisthenics, and especially doing sit ups. 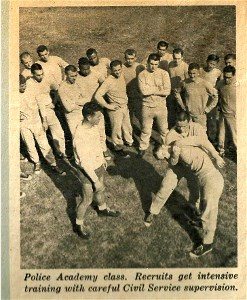 Jerry Cokely and Frank Escalante back row 3& 4 from right

We started from scratch and worked our way to 100. I developed a bright red “cherry” raw spot at the base of my spine, during all of that. They wanted us to have great abs and we did. 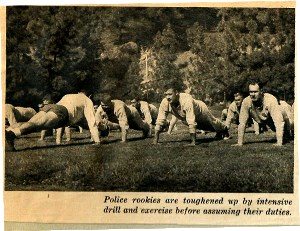 I suppose that if I had Joe Wambaugh’s abilities I might have been more colorful in describing the experience, but you writers know how to take the mundane and spice it up to make it interesting. Lofland’s blog makes for a good read. 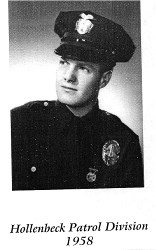 A native Californian, Jerry Cokely grew up in Eagle Rock, a Los Angeles neighborhood. After high school graduation in 1953 he joined the Navy and served four years with the USMC hospital corps on mainland Japan and the Pacific islands of Okinawa, Iwo Jima and Luzon.

After his discharge he considered re-enlisting but friends talked him into filing an application with the Los Angeles Police Department. In his 21 years with LAPD he worked everything from traffic to vice to investigations—burglary, robbery, auto theft, juvenile and homicide. 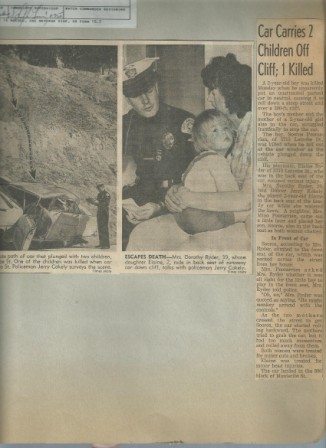 Jerry was in the thick of historic events during the tumultuous Sixties, including the Watts riots of 1965 and the assassination of Robert F. Kennedy in 1968. 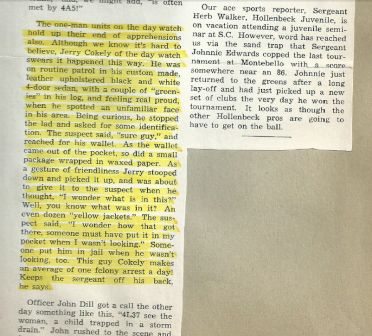 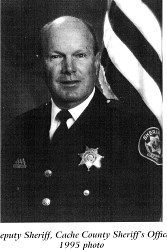 Jerry is now enjoying his third retirement from law enforcement.

*A note about Jerry Cokely’s friendship with Joseph Wambaugh. 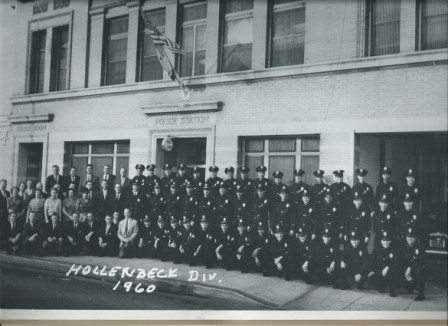 When both Joseph Wambaugh and Jerry Cokely were detectives in the Hollenbeck Division, they worked night watch together for several months.

Cokely comments: “He (Wambaugh) was a good cop and I enjoyed having him for a partner. He didn’t just happen to become a famous author but had a master’s degree in English Literature. He once told me it was the dream of English Lit majors to write a best seller during their lifetime. His dream came true in spades.”

Joseph Wambaugh joined the LAPD in 1960. In 1971 he hit bookshelves with THE NEW CENTURIONS and his writing career took off. He received the Grand Master Award from Mystery Writers of American in 2004.

He became famous while still on the job but in 14 years with LAPD he was still one of the guys. 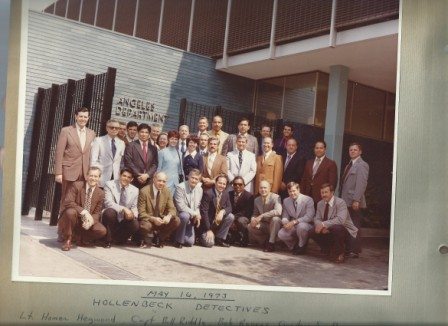 The three women in the center of the photo were detectives working the Juvenile Detail.

Cokely credits Wambaugh with teaching him to play tennis. They played frequently at Hollenbeck Park until Wambaugh had his own court built at his San Marino home. Cokely still remembers “parking my 1961 VW bug next to Wambaugh’s 1978 $14,000 Mercedes.”

*Thanks to Pat Browning for doing the legwork to make this article possible.