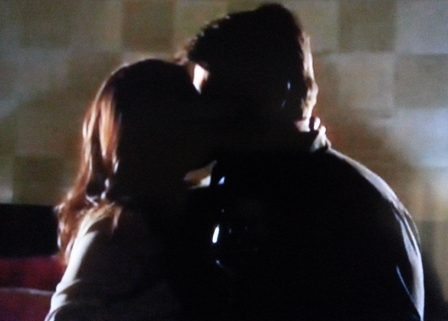 “You’re stressed out…exhausted. You haven’t written a word in over a week.” Beckett

This week’s Castle episode was different from most. Instead of focusing on a case assigned to Kate at work with the NYPD, it opened with Rick reeling from a nightmare concerning his disappearance last summer. I’ve always thought his abrupt vanishing on the way to their wedding was a terrible plot device inserted only to anguish the show’s fans. The rest of the series showcased their great love affair, and then boom. Rick never makes it to the altar.

I’m sorry, but this plot contrivance didn’t work at all for me. Conflict for the sake of conflict has ruined many a story, and it came very close to ruining this one. The show’s writers have done their best to scratch their way of the corner they boxed themselves into, but I’m still irked by the result… maybe even more so now, after hearing the awkward explanation about why Rick disappeared in the first place.

When the episode opens, Rick is apparently reliving events that happened during his time away in his dreams, and Kate is worried about him. I was happy to see her therapist, Burke, back on the show, and delighted that she encouraged Rick to go see him. He helped Rick recognize the individual elements of his most recent dream, and this in turn helped him get to the bottom of what happened, at least in theory.

The story that came out was simply too fantastical for me buy. Spoiler alert! I’m sorry, but the writers expect me to believe that a former exchange student Rick knew in high school joined Al Qaeda, then defected to became a double agent for the CIA… only to need to hook up with someone famous so the folks who learned what he was doing wouldn’t kill him before he told the CIA about a new terrorism plot, so he had Rick kidnapped on the day of his wedding and brought to Thailand? And Rick’s presence there allowed said operative to reach out to the CIA and thus thwart the plot, saving tens of thousands of lives?What? Talk about a squirrelly contrivance. I’m still shaking my head. If I ever wrote a crazy plot like that in a book, reviewers and readers alike would laugh me off the Internet and out of bookstores.

All that said, I enjoyed the incredible sense of family in the episode. The fact that both Alexis and Martha went to Kate when they were worried about Rick spoke volumes about how close they’ve all become. I adored their interaction. I also loved the final scene, with first Rick, Alexis, and Martha, and then Rick and Kate.

I may never truly buy the bizarre explanation for Rick’s disappearance, but I do still love the show and hope they give us at least a shortened season next year so I’ll have a better sense of closure when it ends. Nathan has already signed on for season eight, but I have yet to hear about the other cast members who are still in contract negotiations. We should know something at least by early May during the ABC upfronts.

Next week’s episode looks intense. Rick and Alexis and snakes on a plane! Can’t wait!

I can sum up my portion of the episode review in a single word…DUMB. Yes, that’s exactly what I thought of the story and writing. The writers of this show have taken more than their fair share of practice jumps in preparation of releasing the actual shark into the waters, and with last night’s crappy storyline, well, it’s obvious that they are now ready for the main event. Even the once white-hot spark that zipped among the cast members seems to have faded a bit.

Anyway, let’s talk about Lanie. I admit, when she enters a scene I have the chip on my shoulder secured firmly in place. However, she wasted no time in slapping it away last night by diving in with a “based on liver temp time of death” comment. Bravo, Lanie! Then she followed up with a “but I’ll know more once I do a full workup on him.” Dang, Lanie hit us with a double dose of accuracy and, well, I’m still cheering. Good job. Of course, she did dim the lights a bit with the comment about finding a trace of talc in the victim’s mouth. But I won’t dwell on a little bit of bad.

BUT…along comes Beckett who orders up a team of bloodhounds to search for the latex glove worn by the killer. Tracking dogs needs a scent to follow, such as keying-in on an article of clothing worn by the person for whom they’re searching (they didn’t have anything belonging to the killer). Or, the animals are trained to search for a specific item, such as drugs, explosives, etc. I’m not aware of any K-9 training that’s specific to latex gloves. In other words, no department keeps a kennel of dogs who’re trained to search for latex gloves. Besides, how silly would it sound for the officer in charge to shout, “Call in the glove dogs!” And wouldn’t you just hate to be the “Glove Dog Handler?” Sounds a bit like a behind the scenes joke in a proctologist’s office.

1. True. Officers may search a residence without a warrant when exigent/emergency situations are present.

2. The 4th Amendment protects against unreasonable search and seizure, not the 1st.

3. There is no Constitutional requirement for officers to read the Miranda Warning to suspects at the time of arrest.

4. Cordite has not been used in ammunition since the end of WWII.

5. Bullet-proof/resistant vests do not stop all bullets.

6. No, not all police officers are expert marksmen.

7. False. Most police officers are not skilled in the martial arts.

8. Fear is a natural human emotion and all officers experience it at times.

9. DNA testing is absolutely NOT flawless.

10. Handheld fingerprint readers can indeed return results in as little as 45 seconds. Remember, though, a person’s prints must be in the system for an ID to return.

12. NETF (National Explosives Task Force) is a law enforcement group that analyzes and disseminates information relating to explosives. The task force includes members from the FBI, ATF, Homeland Security, the Office of the Director of National Intelligence, as well as various bomb technicians and other experts.

13. Turkey Vultures are indeed used to detect leaks in gas pipelines. Engineers pump a gas called ethyl mercaptan (the gas produced by decomposing bodies) into pipelines and where the buzzards circle, well, that’s the location of the hole in the pipe.

14. Eighty-seven countries recently participated in a recent meeting of experts to discuss lethal autonomous weapons systems—weapons that would/could select and engage targets without intervention by a human. It’s a very real concern.

15. Yes, there is a smart keyboard that can identify its users by the way they type—key pressure, typing speed, patterns, etc. Therefore, even if someone knows your password, the keyboard would “know” the user is not the proper person who’s attempting to log in and would not allow access.

The smart keyboard cleans itself and generates its own power by harnessing the energy generated by typing.