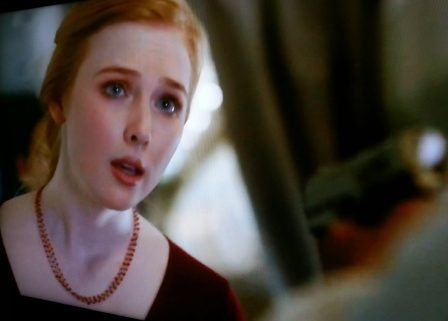 I enjoyed this week’s Castle much more than I did last week’s episode, even though it didn’t have many delicious Caskett moments. The story still included Kate, and I loved seeing Rick and Alexis having some father-daughter time. I had to suspend my disbelief to buy into the story, of course, but even though having a trio of flight attendants ask an author to investigate a murder aboard their plane would more than likely never happen in real life, I let myself dive in and revel in the suspense.

I can’t speak to the police procedure, to be sure, although several times I pictured Lee rolling his eyes. Tory the computer expert definitely worked her magic, as did Lanie, via cell phone at 39,000 feet. I snorted at their revelations, of course. Who wouldn’t? But I did totally buy Rick using graphite from a mechanical pencil to get a fingerprint from a plastic glass. The instant match after sending a pic to Kate in NYC was outlandish, but I could still see getting a fingerprint that way under extreme circumstances. Worked for me.

On to the rest of the story. I adored the suspense, the twists and turns, and even the slimy looking yellow snake, who in real life is named Steve. I kid you not. I learned that on Twitter. So funny. Who names a snake Steve? But I digress. I enjoyed the story very much and almost pegged the right person as the murderer. I thought the male flight attendant had done the deed, but the killer turned out to be the most helpful one. Hmm. Guess that should’ve told me something. Still, I knew it had to be one of them because they showed up right off and asked Rick to solve the murder. Right.

I hope next week’s episode will be this good. I’ve heard it’s supposed to be a funny one, and I’m looking forward to a chuckle or three. After that one is the finale. Sob. I really hope this isn’t the last season. I’m a Castle addict and would dearly love to see at least one more, even if they shorten it to ten episodes or so.

Sure, there were a few eye-rollers” regarding police procedure in this episode, but the way it was written, for a change, allowed the viewer to properly suspend belief and enjoy the show.

Of course, even the storyline didn’t change the standard boilerplate succession of red herrings followed by the climax where the all-too-predictable killer is revealed. The killer du jour was extremely obvious, but that’s standard Castle fare.

Still, this one was a fairly nice episode in spite of Beckett and crew handling a case they had absolutely no authority to handle. Well, there was that thing about Lanie determining cause of death and that the killer was left-handed, all from looking at a Skype video. Shoot, I can barely tell who’s on the other end in those grainy calls, so for Lanie to…hell, never mind. You know.

Hey, whatever happened to these guys working typical NYC murders? Last week was Al Qaeda and this week an ISIS aspect?

Anyway, as far as the police procedure and forensics go…fuhgedaboutit and enjoy this episode for what it is…fiction.

Oh, it was nice to see Alexis save the day. It was, after all, her turn to have a gun pointed at her.

I’ll be at the Oklahoma Writer’s Federation, Inc. Conference this weekend to talk about Villains, Cops, and Officer-Involved Shootings. I’d love it if you’d stop by to say hi. And, while there the conference is auctioning a coveted spot at the 2015 Writers’ Police Academy!

Keynote speaker at OWFI is our pal Les Edgerton!

My Thoughts On Baltimore
Scroll to top