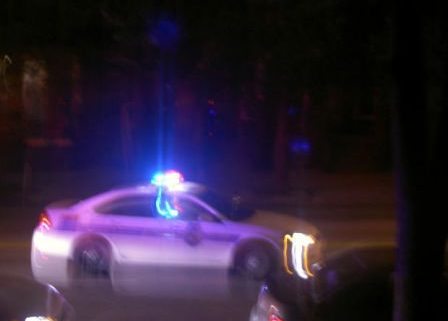 Denene and I once had an extremely unpleasant encounter with a Baltimore police officer. Here’s what happened.

While visiting the city we were walking along/on a path in a public park. Between the gravel trails there was a newly installed lawn with numerous “Keep Off The Grass” signs dotting the lush greenery. It was a lovely place, especially so when considering the huge amount of nearby drab and dirty concrete, graffiti, and litter.

Suddenly we heard someone shouting, so we stopped walking and looked around to see what what all the yelling was about. Well, we saw a very large uniformed police officer standing approximately 50-60 yards away, directly across the lawn from our location. A man in plainclothes stood next to him (I’m not sure if he was an officer or not). The man in uniform began shouting again. We realized he was shouting at us.

Suddenly the officer and his companion launched in a full run, straight toward us and across the new lawn, while dodging the Keep Off The Grass signs. We stood still, waiting in the precise spot we were in when he began his tirade. When the pair finally reached us, huffing and puffing from the long run, the officer moved into a position where he was chest-to-chest and toe-to-toe with me, and started shouting again. I moved a bit to position myself between the officer and Denene.

“Read what?” I asked, totally not understanding what the hell he was talking about.

“Those signs right there!” he screamed while pointing to the Keep Off The Grass signs.

By now his partner had moved in close as well, as if I was about to be handcuffed. Believe me, I know the move.

“Then why were you on the grass?”

“We weren’t on the grass,” I said. And we weren’t. Never even came close to it, actually.

Okay, I’d had enough of this BS, so I closed the remaining four-inch gap between my chest and his gut (he was that big) and WENT OFF. He finally quieted down and backed off, but not before having the last word. “I’ll lock your ass up if I catch you on the grass again. You white people think you can do whatever you want.”

Yeah, he went there. You white people. And I sensed the contempt he had for me. I also knew he was dying for me to touch him so he could reciprocate with whatever means it took to get me in handcuffs. His friend inched closer. I stood my ground.

Then he and his buddy slowly backed away and headed back across the lawn, tromping through the Keep Off The Grass signs, to where I first saw them.

Denene and I went back to our hotel where, ironically, I was scheduled to speak on a panel with, get this, the officer’s boss. But I couldn’t stand it. I wanted to go back to the park to give the officer a piece of my mind and to school him on a few things he’d done wrong. Denene begged me not to go, fully anticipating spending a lot of cash to get me out of a Baltimore lockup, or hospital (the guy was huge and she knows I wouldn’t back down from a charging elephant, if I’m right).

But I went, and I calmly introduced myself and provided a bit of my background before diving in with my complaints. I also was quite clear that I was in town to teach about proper police procedure. He quickly apologized and offered a big bear paw for me to shake, as a peace offering.

I shook his hand and said I accepted his apology, but I knew it wasn’t sincere. He was merely worried that I’d snitch on him to his boss. But I didn’t. Never mentioned it to him.

But I’ve never forgotten that day in Baltimore. I’ve also not forgotten what it feels like to have race enter into an encounter with the police. It’s a dirty felling that no amount of soap can wash away.