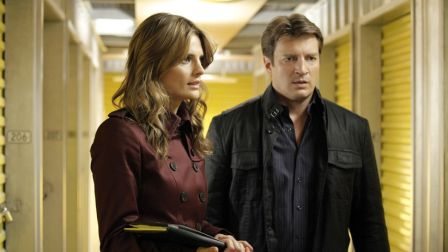 Let’s just say this episode was a little weird. Odd, even. But the Beckett/Castle relationship is going well, and that’s the main thing, right? So before I dig into the police procedure and equally bizarre forensics, let’s see what Melanie thought of this “eye” opening show. Melanie, are you there?

This episode seemed kind of odd and convoluted, but most of it was about “stuff”. Alexis’ stuff, Kate’s stuff (hers had a whole different meaning to Rick, if you know what I mean), and the stuff inside the storage unit he bought. Even Gates got into the act by liking those creepy little dolls. And apparently, people with stuff have secrets. Rick and Kate have a secret, too. Their relationship. So far, no one else knows… or so they think.

When the show opens, Alexis is boxing up everything she owns in preparation for moving into her dorm room at Columbia University. Who takes all that stuff to college? No one I know, but then again, this is TV. While Martha and Rick are helping Alexis pack, Martha lets Rick know she knows about him and Kate, and she urges him to tell Alexis. How did Martha find out? She says, “A mother always knows”, but my guess is that she saw Kate in the closet that day when she came home unexpectedly. Rick does tell Alexis, and she is less than pleased. Or is she?

Rick truly believes his daughter doesn’t like Kate — that Alexis believes Kate might replace her  in her father’s heart– and he tells Kate. She offers to talk to Alexis, but he says no. Turns out that was a good idea, because later in the show we learn Alexis wasn’t upset about their relationship after all. No, she was more worried about leaving home, because her dad wouldn’t be there if she needed him. I can see that happening, I guess, but when I went to college I couldn’t wait to move into the dorm. Alexis’ father is Rick Castle, however. He’s not only been her dad, but also her playmate and her best friend. They’ve played laser tag, built forts, and practiced fencing together since she was little. So now, she’s having trouble dealing. She even got him to look under her bed to check for monsters one last time, and I thought that was sweet.

Back to the stuff. Rick finds a funny little stick man in Kate’s desk, and she doesn’t want to talk about it — even when he surmises that it’s the victim of a murder at a stickman convention. That made me laugh out loud! Later, though, Kate tells him how she got the stick man… a very sweet story involving her dad and a trip to Coney Island after her mother’s funeral. In my opinion, her sharing this story with him was another milestone in their relationship. Kate is opening up more and more.

Then they shake hands. A very sensual handshake in lieu of kissing in the precinct. A handshake that in my opinion should have drawn more attention than any kiss. Wow. Talk about sparks… That was nice, but I wanted another actual kiss like we got last week — not all of the almost kisses we got because they were always together at the precinct and never at home. They’re still together, though, and appear to be going strong. So I’m happy.

The promo for next week’s episode made me smile as well. Rick and Kate go to the Hamptons for a romantic weekend that, of course, is cut short thanks to a murder — but maybe we’ll at least get a few kisses.

Okay, before I start I want to remind everyone why I do the review of the police procedure and forensics. So please read this disclaimer before sending the scores of hate mail I normally receive after these reviews are posted. Of course, I do find many of them as entertaining as the show, such as this charmer from last week, “You’re an idiot and don’t know what you’re talking about. Instead of relying on guesses and information you’re surely reaching to outer space for, you really should buy a book on police procedure and READ IT before writing another one of your misinformed reviews.”

Really? Did you really and truly go there? Read a book on police procedure? Me? Why, I think that’s a great idea. In fact, I’ll just reach right over to my bookshelf and…hmm…let’s see…which book should I pick? Yes, here’s one on police procedure. Who’s the author? Oh yeah…ME! 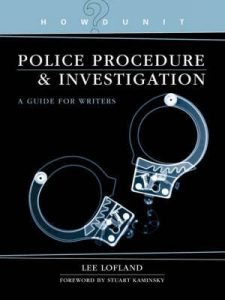 Anyway, I like the show and I think the characters are fun, for the most part, especially the core four—Beckett, Castle, Ryan, and Espo. But I write the reviews on police procedure because a group of mystery writers (also fans of the show) asked me to point out the incorrect police procedure and forensics so they wouldn’t make the same mistakes in their work. So that’s how and why this review came to be. I know the show is fiction, and to the Lanie worshipers who write me regularly, yes, I know Lanie does not practice voodoo in real life (and you do realize Lanie is a fictional character, right?).

Okay, enough of that. On with this episode…

– Lanie holds up an evidence bag containing an intact round, casing and bullet. Now, I don’t mean to be picky, but normally (ALWAYS) a bullet separates from the brass when the round is fired. The bullet travels away from the weapon, leaving the brass behind. So, unless the killer manually inserted this bullet into the body of his/her victim…Well, you get the idea. Besides, where did Lanie get the bullet? Did she dig into the victim’s chest to retrieve it on scene? Silly. Just plain silly.

– Bloodstain patterns/spatter on the victim’s face and neck were not consistent with the gunshot wound. Well, unless she’d been standing on her head when the bullet struck the flesh, that is.

– Lanie is a one-stop-shop for all things forensic. I realize the writers use her as an information dump to dish out clues, but why don’t they do it in a way that’s believable? Make her a scientist or a lab rat, or any other character who’d have the skills and knowledge to determine and report findings such as fingerprints and DNA. M.E.’s are NOT fingerprint examiners. Nor do they conduct DNA testing. Sure, they’ll collect samples, but those samples are sent to labs for testing—labs with scientists who are trained to run the appropriate tests.

For Lanie to say she found a partial print on a shell casing is ridiculous. The casing would have been collected at the scene by CSI’s or detectives and then sent to a fingerprint expert at the lab. Then, the expert would submit results/findings back to the investigator. What would work just fine for this show, though, would be to have Lanie simply say something like, “Billy Bob in the lab says he found a print on the casing, and it’s not a match to anything they have on file.”

– Just for fun… Why did Castle need to break open the doll to retrieve the contents from inside? How’d the bad guy get those things in there in the first place? The doll wasn’t broken then, I wouldn’t think? Just a thought.

Okay, the glass eye thing was just plain stupid. Didn’t make sense. Didn’t fit the story. And, well, think about it… A man is driving along and rear-ends the car in front, killing the two occupants. He gets out to see what he’s done, when suddenly his glass eye pops out and rolls away. So he leaves the scene of the crime, with one eye open and the other closed. Then, years later, out of nowhere, someone breaks into the house where the hit-and-running, one-eyed-guy works as a butler. And what does the thief steal? Yep, the butler’s spare eye. So the butler a-s-s-u-m-e-s the theft is related to the accident and then kills everyone related to the past crime, hoping to retrieve the evidence (the lost eyeball) linking him to the deaths.

And, of course, super-voodoo Lanie has found DNA on the original glass eye (the one lost at the accident scene) and matched it to the butler’s DNA. Well, where did she get the butler’s DNA to use for comparison to the DNA she (which is ridiculous for a M.E. to do to start with) says she found on the lost, but now found, glass eye? And, what about…

Okay, that’s enough. I quit. No more. This one gave me a headache.

*By the way, there was a bonus in this episode for Writers’ Police Academy attendees, and that was a funny line delivered by Beckett when she and her team found one of their “red-herring” suspects in the back of a van, using a grinder to open a stolen safe.

Beckett – “Take your hand off your tool, Marco.”

WPA recruits will get it…right, guys?

Andy Russell Talks Garrity: When Officers Have The Right To Remain Silent
Scroll to top