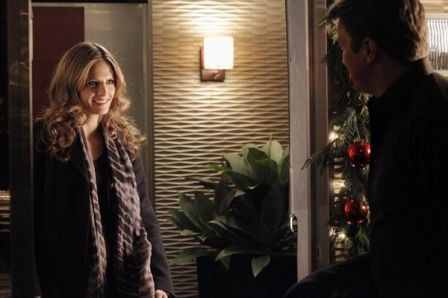 Holiday traditions was the behind-the-scenes message in this episode. Well, that and Santa simply cannot fly without his reindeer. But he does make the deepest snow angel I’ve ever seen.

Anyway, the show this week was a great reminder to us all that time, and life, moves on, and that it’s okay to begin a new tradition. And what better way is there to start a new tradition than to do so with someone you care about?

For now, though, I’ll stick to our old tradition of asking Melanie to start off the review. Here goes…

Finally, a Castle Christmas episode! The dead Santa case was rather bizarre, so I won’t really even mention that, but I loved the Casketty goodness. As the show begins, Kate at first assures Rick she’ll come to the loft for his family’s Christmas Eve festivities, and he’s so excited. Not surprising, with his nine-year-old on a sugar rush tendencies and his deep love for Kate.

She seemed startled by his casual description of his huge tree and other elaborate decorations at his place, however, although I don’t know why she should have been, knowing him. Still, after that, she kind of pulled back a bit. I had to wonder if that had something to do with losing her mom right after Christmas all those years ago, or if she were simply overwhelmed by Rick’s lifestyle and exuberance, especially in light of her initial reaction to his huge Hampton’s house in an earlier episode.

Then both Martha and Alexis told Rick they had made other plans for Christmas Eve. He’s crestfallen. How can they abandon their traditions? Why would they even consider it? He’s still reeling from their defection when Kate tells him she has to work that night because the precinct is shorthanded. Rick can’t understand that, but he somehow manages to keep his cool after at first freaking out, and he lets her know it’s okay. Poor Rick. Will he be alone on Christmas Eve?

Even though he seems resigned to the fact that his traditions are changing, he brings Captain Gates a gift and asks her if she’ll please ask someone else besides Kate to work that night. Gates lets him know really quick that Kate asked to take a shift on Christmas Eve. That stuns him.

He confronts Kate a little later, saying, “If you aren’t ready (to join my family for the holidays), why didn’t you just tell me?” Kate explains that Christmas hasn’t been the same for her and her dad since her mother died on that fateful January ninth. Their Christmas decorations were still up, and when they put them away after her death, they put them away for good. The boxes haven’t been opened since. Jim goes to his cabin every year, while Kate “keeps watch” so other families can celebrate the holiday. I teared up during her confession, and for a minute I thought Rick might cry, too. Wow. He was so understanding about that, so sweet. I wanted to hug him. (Well, when don’t I want to hug him?)

When that night finally rolls around, Martha and Alexis join Rick for their traditional Christmas Eve dinner and surprise him by proclaiming they’d changed their plans so they could spend the entire night with him. He is still miserable, however, because he wants to share the holiday with Kate, too. So they send him off to the precinct… only, when he opens the door to leave, Kate’s standing in the hall, about to knock on his door.

“I was just coming to see you,” he tells her, and she says, “I was coming to see you, too.” So sweet! They both decided to start a new tradition, with each other. Sappy, maybe, but I loved it. The decorations were beautiful (as Kate said) and totally over the top, but they also were so Rick. And the kiss in front of the tree… perfection — although I would have liked one a little less chaste, even thought that wouldn’t exactly have been appropriate with Martha and Alexis in the room. And I didn’t exactly like the fact that Rick said he didn’t get Kate a gift. Really? Still, I loved the romance, the Christmas goodness, and the lightness of this episode. Classic Castle.

Welcome to the Christmas hiatus. See you all again in January, when Kate and Rick will have to deal with Meredith, one of Rick’s ex-wives!

Beckett – “Was the cause of death the fall?”

Lanie – “Looks like it, but I won’t know for sure until I get him back to the morgue.”

Okay, I did a few cartwheels after I heard Lanie’s comment. Yes, that single bit of dialog was nothing short of a Christmas miracle. And, for two weeks in a row…wait for it…Lanie was totally believable!! Sure, I was on the edge of my seat, waiting for the axe to fall. But it didn’t. What a breath of fresh air.

Even later, when Lanie showed Beckett a bullet that she’d dug out of Dead Santa’s back, a halo floated above her head. Unfortunately, Beckett stepped in and made a goofy comment. They just couldn’t leave it alone.

So I’m guessing that Lanie gift-wrapped her old crystal ball and re-gifted it to Beckett, because that’s the only way Beckett could have accurately predicted the caliber of that round without testing.

Lanie continued to impress me when she said she was going to send the red paint chip (found embedded in Santa’s red suit) to the lab for analysis. Great stuff! That’s how it’s done in real life. Labs test and examine evidence. The old Lanie would have taken a mere glance at the sample and instantly spouted off the chip’s entire chemical composition. Again, she was very good this week. Even the manner in which she delivered her lines this week was believable.

– Beckett…well, she searched dear old Santa’s apartment without a warrant. Not a good idea if want your evidence to stand up in court.

– Hey, what about the helicopter seat? You know, the one that’s totally dry and clean, but when pressed with fingertips, oozes a pint or two of fresh, liquid, bright red blood. This is where Santa supposedly bled after receiving the gunshot wound. Yeah, right. How many of you have ever cut yourself? Okay, how many of you have ever seen blood on a surface such as a floor or counter top (cut finger). Does that blood remain in a liquid form, and bright red, until, say, a day later? No way. And neither would the blood inside a foam seat cushion.

– Beckett sees a lot of activity at Case Commerce and asks a uniformed officer, “What’s going on here?”

“Looks like a heist occurred at the office Christmas party,” he tells her.”

Okay, who says “heist” these days? A present-day cop, especially in public, would most likely refer to the crime as a larceny.

Well, that’s about it for the police procedure this week. But I would like to mention this dialog between Ryan and Esposito.

Ryan – It seems like the world is falling apart. How am I supposed to bring a kid into that?

Esposito – The world’s always falling apart, since the beginning of time. But having kids, making a family, that’s what keeps it together.

How appropriate for these troubled times of ours.

*By the way, Esposito delivered the stolen clock to its original owner, Ms. Cabot. Well, there’s a tiny flaw with this heart-warming deed…the clock is evidence in a crime. He couldn’t simply remove it from the PD and give it away.

Until the next episode, ho, ho, ho…

Followon TwitterSubscribeto RSS Feed
Have You Seen This? I Have …