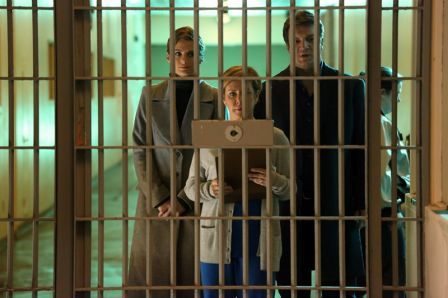 While watching the last scene of this episode, a booming thunderstorm and near torrential rains waited until just the right moment—the last minute of the show—to knock out our satellite TV reception. As a result, I missed the ending. How appropriate, though, to hear the skies grumbling and groaning and spewing jagged streaks of hot white electricity while Castle spent the hour waiting for his predicted B-grade horror movie demise. What I did see was nearly an hour of good fun, and I’m curious to know if Melanie enjoyed this one as much as I did. Melanie…

Rick Castle cursed? Ha! I don’t think so, but he’s certain he’s next to die after watching a creepy video at a murder victim’s apartment. With his vivid imagination, he takes the video literally and freaks out while Beckett, ever the level-headed cop, scoffs at him. I loved the quick-witted by-play between Rick and Kate and the weird twists in this episode. After watching The Following and with thunder rumbling outside, it fit right into the night’s eerie feel.

The victim’s death and the deaths of two others were all connected to a serial killer named Nigel Malloy. I won’t go into too much detail about the case, because that’s Lee’s purview. Let’s just say I enjoyed Purlmutter’s snarky remarks, the odd twists and turns, and especially Rick and Kate’s trip to the cabin in the woods late at night to save another possible victim.

Rick is desperate to ward off the evil spirits, so he brings a “war chest” filled incense, some kind of mirror, and even holy water to help save them. Once they get to the cabin, they have no phone reception. Then the lights go out. And… a stranger is lurking outside. Kate chases him/her and finally brings down the nurse who attends Nigel’s brother at a mental hospital. I didn’t see that coming, but then I was more focused on Rick and Kate’s interaction than the rest of the story. Only, the nurse isn’t the killer.

The roommate of the original victim enters the cabin while Kate’s gone and uses a modified Taser to temporarily blind Rick, but Kate calls his name and he hits his assailant on the head with the holy water just in the nick of time. Too perfect.

My favorite part of the episode was Castle studying his bucket list to see what he could mark off in only three days. Then, of course, the delicious Kate-Rick interaction in the loft at the end when we learn the number one thing he had on his bucket list was to “Be with Kate”… and that he’d written the list three years earlier. Aw, too sweet!

I loved the lighter feel of this episode mixed with the inherent creepiness of the curse and the cabin in the woods. A nice change of pace from the last episode’s intense drama.

Next week, we get one that’s a little more Ryan-centric, and then on April Fool’s Day (Castle’s birthday), we get the show’s 100th episode written by Castle’s creator, Andrew Marlow, and his wife. That one’s guaranteed to be awesome.

There really wasn’t a lot of police-action/procedure this week. However, the little we did see was a little wacky. Like, when Beckett and crew traveled to Hoboken, New Jersey to kick in a door to Victim #2’s apartment. I’m sure you’re all aware that local police don’t have the authority to roam around the country bashing down doors and kickin’ butt. There’s a little matter of jurisdictional boundaries that come into play, and other departments and courts sort of frown on it when strangers force their way into people’s homes. I believe the correct terminology would be breaking and entering/home invasion.

As much as some would like to think, a badge is not a free pass to any and everything. Of course, Beckett and her posse could have dropped by the local police department and, after following the correct procedures, obtained a search warrant with the assistance of the local authorities. Then, they could have assisted the Hoboken police with the service of the warrant.

We were once again treated to an appearance by Perlmutter, whose favorite pastime is Castle-bashing. I had to chuckle when he addressed Beckett and Castle as, “Detective Beckett and DeFECtive Castle.”

Perlmutter delivered another mild zinger when he responded to Beckett when she asked if the victim had a heart problem. Perlmutter replied, “Well, she did when it stopped beating.”

It was nice to see an appearance by avid bird-watcher and slasher-film king Wes Craven of Nightmare on Elm Street and Scream fame. However, the scene really made me miss the earlier poker games.

As the episode progressed we saw the introduction of horror movie classics, like the cabin in the woods and the equally predictable lack of cell phone service.

Of course, all of the action was plugged into the traditional boilerplate script that never fails to feature a killer who was seen only briefly somewhere in the beginning of the show. And, there are always a few red herrings sprinkled throughout, including the asylum nurse and a sudden potential victim number three that was simply dumped in seemingly at the last minute.

Still, in spite of the predictability factor, this was a fun episode. And that fun was distributed throughout the show and characters. Even tough guy Esposito treated us to his more vulnerable side when the sudden appearance of a man startled him. Of course, he instantly regained his composure and attempted to “man-up” in front of Beckett. His comment to her was priceless and classic Castlesque humor. “Hey, I’m a grown-a** man.”

Well, as I stated earlier, I missed the end of the show thanks to a spectacular spring thunderstorm. It was one of those where the thunder is not quite in your neighborhood, but close enough to make the house quiver. And where sporadic lightning sends flashes of white that illuminate the curtains just enough for small children to see the black silhouettes of swaying trees, and demons and goblins darting across the backyard.

It was a night where…well, it was a dark and stormy night that made me miss the ending, doggone it.

A quick reminder…there are less than a dozen slots left for the 2013 Writers’ Police Academy. If you plan to attend, now is the time to register. Once those remaining spots are filled we will be closing registration.

Also, those of you who have already registered, please, please, please hurry and reserve your hotel rooms. They, too, are extremely limited due to other events in the area. Once our block is filled we will not be able to secure additional rooms.

As always, I thank you all for your overwhelming support for the Writers’ Police Academy. Don’t worry, though, I’m not finished. Now it’s time for me/us to start begging for raffle and silent auction items. Please contact me if you have signed books or other items to donate. Profits from the WPA go to the criminal justice foundation at our host academy/college. The money is used to train law enforcement officers, firefighters, and EMS personnel.

Also, we are actively seeking new sponsors and advertisers. If you’d like to become a WPA sponsor and/or place an ad in the WPA program and on the WPA website, please contact me.

Again, we appreciate all you guys do to support the WPA. We couldn’t do it without your help and generosity!

Donald Bain: The Science Behind “Experiment in Murder”
Scroll to top