I was looking forward to watching Castle last night. After all, I figured I deserved a few chuckles after spending all day in meetings about the 2011 Writers’ Police Academy. I know, the show opened with a dead body, as usual, but Fillion quickly lightened the mood when he compared looking at a corpse to watching David Hasselhoff (it’s repulsive at first, but you’re strangely drawn in). 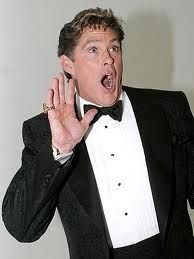 And speaking of train wrecks…

To save time and the contents of my stomach, let’s just list the stupid things she said this week.

1. She looked at a dead body (at the scene) and said the cause of death was a single gunshot wound, probably from a .45. Well, there’s no way she could “predict” the cause of death pre-autopsy. And she certainly wouldn’t be able to determine what size round caused the hole. Besides, she’d only looked at the front of the body. There could have been multiple alligator bites on the other side for all she knew.

2. Lanie stated (again) that lividity suggested the time of death was around midnight. Lividity is NOT used to determine time of death because it doesn’t offer that kind of information. Lividity would tell us if the body had been moved, but not when.

3. I almost kicked my TV screen when Parish said she’d found rust on a bullet, and based on the amount of rust on it she estimated the round to be 200-years-old. So, in addition to her career as a pathologist, she’s also an expert on antique ammunition, and rust? Puhleeze…

Tell me something. How old is this? 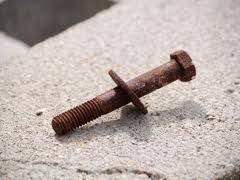 Or this? Any idea? My point exactly. There’s no way to tell how old something is merely by looking at its rusty surface. Lanie would have no way of knowing what sort of conditions the bullet had been exposed to…nothing. Just more of her La La Land forensics.

“Guess what I found found on the victim’s sleeve and glove?” Lanie said. She paused to allow tension to build before answering her own question. “Traces of potassium nitrate and sulfur.”

So, everyone within earshot, including us in television land, was supposed to recognize that those were two of the key ingredients in the powder used to fire the older weapons featured in this show. Why is Lanie’s house of horrors equipped to run every test known to the scientific community? Why can’t she simply send things to the proper testing facilities? And WHY does SHE instantly know everything? There’s no magic machine that spouts off everything there is to know about everything. She’d have needed to know what to test for (potassium and sulfur) before testing. And I wonder why she didn’t find charcoal on those items? I believe that’s the third main ingredient in that type powder. And why would she have tested those articles anyway? Why not a standard GSR test? If she had used a standard GSR test it would have shown positive results, but not the chemical makeup of those results.

Okay, on to a few other points.

– A fingerprint is discovered on the victim’s wallet. In a matter of minutes, maybe even a couple of hours, Beckett’s crew had run the print, learned who it belonged to, and had the guy cuffed and stuffed and seated in an interview room. No way it would happen that quickly, if ever. Wait! Maybe they ran the print in Lanie’s magic bad-guy-finding machine, and when the lights, buttons, and bells stopped flashing, whirring, and buzzing the machine spit this guy out.

– The captain tells Esposito that he’ll see to it that his attacker will get the maximum sentence for his crime. Nope. A police officer has absolutely no say in how much time is given to suspects. That up to the judge and jury.  Officers can’t even guarantee a conviction.

Any thoughts? How about you? Are you tired of Castle’s jealousy? After all, he’s a pretty sharp, determined sort of guy. Would he really behave like this, or would you write something entirely different?