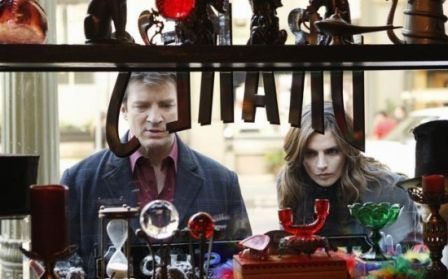 There was certainly a plethora of magic in the air this week. Yes indeed. And the show had some really nice scenes, including one where Castle slips on a pair of x-ray specs to check out Beckett’s hidden assets. So let’s get right to the review before the smoke clears, revealing the concealed mirrors and secret doors. And just so you know, there’s nothing up my sleeves, nothing under my hat, and…x-ray specs, huh? I wonder where you buy such a thing? Strictly for research purposes, of course…

Now, are you sitting down? I ask because I have something to say that’s both important and shocking. So here goes…I didn’t hate the Lanie Parish character this week.

I know, even Barney can’t believe I said that. But, (dare I say this too?) I actually thought the M.E. came across okay this week. Not perfect by any means, and I’ll certainly point out the bad stuff, but overall she was okay. And I’ll go so far as to say she was believable, at times. For example:

– Lanie said, “If I had to guess I’d say the victim drowned, but I won’t know for sure until I get him back to the lab.” Well, this was sort of okay. A medical examiner performs autopsies in a morgue, not a lab, but, at least this time she knew she had to do an autopsy before determining the final cause of death. Normally, she does this in the field. So, this scene was good. An improvement.

Lanie said that the petechial hemorrhaging was present around the victim’s eyes and on his face, which was a good indication that he’d drowned. Normally, in an unnatural death, petechiae is an indication of strangulation or trauma to the neck. It’s even present due to autoimmune problems. But, petechial hemorrhaging is not normally a positive indicator of drowning. Instead, she’d be looking for things like foam in the airway, evidence of clawing with the hands as the victim struggles to survive, wrinkled skin, and others. An autopsy would usually reveal water in the airways. Also, diatoms found in the body can be compared to diatoms in the water where the body was found. If they match then the body was alive when it entered the water. If they don’t match the victim was dead prior to the body entering the water, meaning he was killed elsewhere and his body was later dumped into the water.

Anyway, Lanie’s petechiae diagnosis was weak. But, later in the show she tells us the cause of death was asphyxiation, not drowning, which the presence of petechiae indicated. So, after making a full circle she ended up making sense. And she looked good when she did. The problem with her looking so good was that she was dressed to the nines while in the morgue playing with dead bodies. This was totally unrealistic.

– I suppose I should mention that a woman who knew the murder victim was allowed to walk around inside the crime scene. 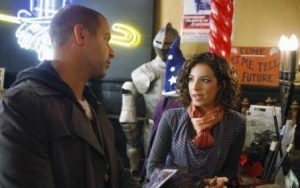 She also stood near the victim’s body while speaking with detectives. Nope. Not in real life.

– Beckett and Castle arrive at the magician/victim’s warehouse and while walking toward the doorless building, Beckett exclaims, “Look, look, look. Footprints!” What? Did the person who made those prints step on a totally wet ink pad before walking across the ASPHALT pavement? How else would someone make a perfect set of footprints on that type of surface. Ridiculous. And I won’t even mention Beckett’s uncanny ability to locate the brick/switch that opened a secret door in the exterior wall of the building. I know this…the next time I come across a solid brick wall I’m feeling for the loose brick instead of walking around to the front door. Beats waiting in line at the post office.

And then there were the wheelchair tire marks on the concrete floor. I’m guessing the person in the chair also rolled across that mysterious ink pad before entering the building, because the tire prints were quite clear and went on forever. This was a Three Stooges moment, folks. I say that because, well, if wheelchairs made marks like this one did, wouldn’t the floors of each and every assisted living, retirement village, etc., be totally covered in skinny tire prints, like a NASCAR track for the physically challenged?

Esposito said he matched the wheelchair tire prints and was tracking them down to a manufacturer. I know there’s a database, or reference, for footwear and vehicle tires, but one for wheelchair tires? I’m not so sure about that one. I guess it’s possible.

– Lanie backslid for a moment when she said she discovered traces of some sort of chemical in the victim’s nose and throat. She even went on to say that the chemical is used in jet oil, nerve gas, and hydraulic fluids. Well, she’d have to be specifically looking for this stuff in order to test for it. Now, if the stuff was obvious to her, then she may have ordered a test for it, but it would take quite a while to learn the results. And she wouldn’t run the tests herself. Nor would she compare fingerprints as she stated elsewhere in the show.

But, I’ll have to give Lanie P. a pass this week, since she was so obviously distracted by her new sleepover buddy, Esposito. For me, this will take some getting used to. And, I agree with Castle when he said, “Never sleep with someone you work with.”

Okay, enough of the cop stuff. Again, this show disappointed those viewers who like to help the characters solve the mystery. Those mystery-solving TV-watchers don’t like to have the killer (characters we’ve never seen until the end) simply tossed at them at the end of the show. It would have been nice to at least seen these folks walk through a scene, or something. And this is not the first time we’ve been cheated by the writers of this show.

In this episode, it was as if the writer reached a point in the script and realized that she had run out of time and needed to wrap it up. So, she reached to the sky, pulled a killer out if thin air, and then typed THE END.

Still, the show was cute, funny, and viewers, in spite of the flaws, can’t seem to get enough of it.

You know, the chemistry between Castle and Beckett simply oozed from my television set this week. And that’s great, BUT…something’s got to give. Sure, there are plenty of hot coals burning, but even the most dedicated firebug/looky-loo will eventually lose interest and go home if they don’t see a flame sometime. I think it’s coming, though. Yep, I think lips will touch lips, soon.